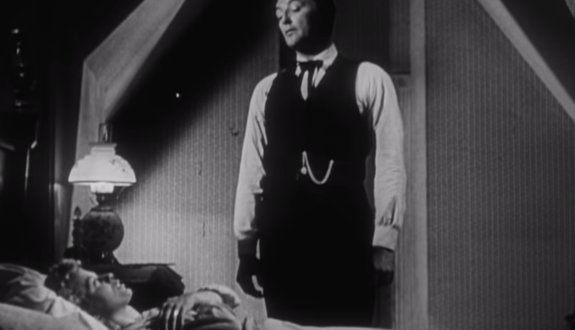 Faith and Films: The Night of the Hunter

Faith and Films: The Night of the Hunter

In the only film he ever directed, Charles Laughton’s 1955 classic “The Night of the Hunter” delves into how some people use faith to hurt and manipulate others, while others use faith to protect the vulnerable, all told in a story about being wary of false prophets.

“Watch out for false prophets. They come to you in sheep’s clothing, but inwardly they are ferocious wolves,” – Matthew 7:15.

Set in West Virginia during the Great Depression, this wolf in sheep’s clothing horror film tells the story of the sadistic traveling preacher and serial killer Rev. Harry Powell, who seeks to get his hands on $10,000 (around $200,000 in today’s money) a family has hidden away. After he marries and murders the mother, he goes after her two children, John and Pearl, who manage to escape him with the money but he keeps tracking them down.

When viewers are introduced to Powell, he’s driving a car and asking God where he’ll take him next and begins talking about the kinds of women he’ll murder and the number he had murdered as part of God’s bidding. “You say the word, Lord, I’m on my way,” he says.

Powell views God’s bidding as murdering people and expressing hatred toward women. He even says, “Not that you mind the killings, your book is full of killings,” and describes how God hates women who smell of perfume and have curly hair.

Powell uses his faith to justify harming and manipulating others. He is someone who constantly preaches about God, sings hymns, and uses the tattoos on his knuckles to gain people’s trust and cover his nefarious intentions. A tattoo on one hand says “LOVE” and the other says “HATE,” which he uses to talk about the eternal struggle between good and evil to charm people and get them to revere him. Ironically, the story about his tattoos represents the overall plot of the movie.

Also, because this movie takes place during the Great Depression, it shows how innocent people in dire situations give their trust to manipulative false prophets who use charm and represent themselves as leaders to gain trust. Powell may have the trust of unsuspecting people around him with his sermons and charm, but at his core all he cares about is killing and stealing money from his victims.

If you look closely at several scenes, Powell often holds his knife in the hand that says “LOVE.” This can symbolize how some religious people disguise violence and abuse as God’s love and being a true follower.

He represents the false prophets in religion who excuse heinous acts as God’s calling and dedication to their faith. Some real-life examples of false prophets include priests who have sexually abused children, missionaries who abused and killed Indigenous children in boarding schools and extremists who committed crimes against humanity under the banner of Christianity.

Opposite of Powell is Rachel Cooper, an old woman who cares for orphaned or stray children.

In contrast to Powell, Cooper doesn’t preach her faith but rather shows it through her actions. Though she is very strict, she deeply cares about the children she looks after. She feeds them, accepts them into her home without judgment, tries to instill strong values into them and does everything in her power to protect John and Pearl from Powell.

Viewers first meet her as the old woman at the beginning of the film telling children about the Bible regarding being pure of heart, not judging others and being wary of false prophets.

She’s a patient woman who recognizes that the world is cruel to the innocent and vulnerable and must protect them. Cooper represents those who practice what they preach, which in her case is shown through tough-love. Unlike others who fall for Powell, Cooper sees right through him and knows his intentions when she says “He ain’t no preacher either.”

In one scene where Powell and Cooper are both singing “Leaning on the Everlasting Arms” in a verbal standoff, he leaves out Jesus’s name in his rendition, while she includes his name. The exclusion of Jesus’s name in the song shows that Powell doesn’t sincerely follow the teachings of Christ, but rather uses Christianity as an outlet to justify cruelty.

Cooper, on the other hand, sincerely follows what she preaches and instead of using the Bible to demean or control children, she uses it to defend and empower them.

While good does prevail in the end, the movie shows that people who use their faith to harm others can easily fool those around them and gain trust, simply because they appear to be figures of authority. It also shows how to identify a true Christian from a false prophet; one practices what they preach and cares for the innocent, while the other paints cruelty as love.

Actions speak louder than words, and both characters’ show their true colors in how they treat those around them, rather than through lip service.

If you’re interested in watching this movie, you can rent it for $3.99 on Amazon Prime Video, or buy the Criterion Collection DVD or Blu-Ray.