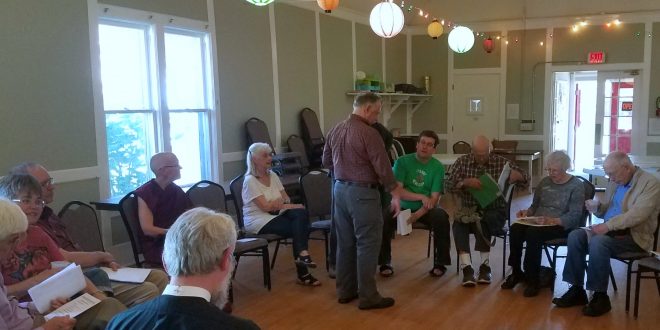 Paul Benz, FAN co-director for program and policy, and an organizer of the summit, said this is part of FAN’s annual program that begins with the Washington legislature, and then goes into four summits held around the state.

The goal of each summit, according to Benz, is to hear about local efforts, share about what FAN is doing, and determine next steps in terms of issues that they want to work together on in the legislature, locally, or in congress.

Benz said there are three things he hopes people gain from the summit; “we hope that they will have a better understanding of what FAN is doing and the issues we’re working on, a clear way in which they can engage, and probably three, a path forward in terms of working together.”

People of various religious backgrounds attended the summit including former and current ministry members, representatives from organizations, as well as those who are Buddhist, Catholic, Lutheran and others.

Attendees shared about what has been happening in either their local faith communities or in some of the efforts that they’re involved in whether it be environmental, economic justice, mental health, whatever it might be, according to Benz.

As they sat in a circle at the mission, the summit began with Benz asking attendees to provide brief introductions, stating their names, which faith communities and organizations they belonged to, and what gives them hope.

Throughout the summit, a variety of subjects were discussed ranging from legislative successes regarding bills, criminal justice reform, and contacting politicians.

One bill Benz said FAN is most proud of is the criminal justice reform bill (SB-5069) because it creates “workforce-type classes” in Washington state prisons to better prepare convicts for when they are released. According to the policy victory sheet, these workforce-type classes “could lead to an Associate’s Degree” for Washington state prisoners.

Benz said this bill “lifted that lid, lifted that prohibition,” on education in Washington state prisons that in the past had prevented state dollars from being used to educate prisoners beyond a General Educational Development certificate (GED).

Some attendees said they tried contacting Rep. Cathy McMorris Rodgers through email and Facebook messenger, and eventually got a response.

Thubten Semkye, a Buddhist from Sravasti Abbey monastery, discussed the “tone” used in messages sent to representatives regarding policy. “I think that it’s really important…that our letters are direct, but respectful and to the point,” Semkye said.

Another attendee added to Semkye’s point by saying he prays for McMorris Rodgers every day. “When I call her I thank her for her service to our country and to our state. . .and I tell her that I’m praying for her every day,” he said, “and then I tell her what I’d like her to support and not support and why.”

Benz discussed three current statewide initiatives: one that involves transgender individuals and restrooms, another addressing use of deadly force by law enforcement, and a third related to carbon tax.

During this, Benz passed a petition asking attendees if they would “decline to sign” I-1552, the initiative about transgender individuals facing discrimination regarding restrooms, which, according to Benz, will be used to show the public “the opposition that there is to the initiative.”

Benz said I-1552 is only one that has been filed so far, although the other two are expected to be filed in the next month.

Retired Lutheran Pastor Tom Soeldner, discussed a renegotiation between Canada and the United States regarding a treaty involving the Columbia River, and how the treaty disregarded the native tribes.

“When it was put into effect in the early 60s, none of the tribes were consulted, nor were there any environmental considerations around the treaty,” Soeldner said, “which essentially blocked salmon from the upper reaches of the Columbia and endangered them in other regions.”

Soeldner said this treaty, along with other decisions, “deprived tribes of the upper Columbia of 70 percent of their food resources.”

He added there is currently an opportunity to renegotiate the treaty and address some of the “injustices for the tribes, and also to consider the environment to add ecosystem considerations as a main purpose of the treaty in addition to power generation and flood control.”

Soeldner said people could go to the Center for Environmental Law and Policy (CELP) website and look at the page about the Columbia River treaty to learn more.

The revenue section advocated a one percent increase in the business and occupation (B&O) tax, taxing carbon emissions at $25 per ton, instituting a tax on capital gains at seven and a half percent, and a repeal of tax exemptions for both bottled water and oil refineries.

FAN’s 2017 legislative agenda is described in the following categories: building a more humane and sustainable biennial budget, increasing support for human services and reducing wealth inequality, dismantling the culture of violence, protecting housing and preventing homelessness, and sustaining Washington’s environment. Each category had a list of bills and costs of issues on FAN’s agenda.

A list was provided to attendees during the summit, detailing FAN’s “Network of Advocating Faith Communities,” which included ones in Spokane. Besides West Central Episcopal Mission, others listed included Salem Lutheran Church, Spokane Friends Meeting, and Unitarian Universalist Church of Spokane.

After the summit concluded, Benz said he heard “the continuing hope that we in the religious community have about making an impact in our communities especially for the poor and the vulnerable and the environment.”

What I take home from here is that “we have hope because of the people here that are doing the good work of justice,” Benz said.