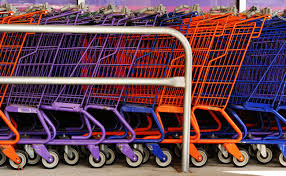 I found myself standing in a line outside a department store at 4:30 a.m. on Black Friday. I don’t know how it happened, but it did. When the store finally opened its doors, its aisles filled with frenzied shoppers, it reminded me of the first 20 minutes of “Saving Private Ryan.” People shouting at sales clerks, huffing behind the elderly shoppers, pushing shoppers through lines — all of this only ten hours after sitting down to Thanksgiving dinner, where, undoubtedly, Americans give thanks for what we have and celebrate our commonality. There’s something to be said about a nation where the day after giving thanks, we literally fight one another over material acquisitions.

It is also worth noting the death of Paul Crouch, the famous televangelist and Christian Network Television mogul, which took place on Nov. 30. As president of the Trinity Broadcast Network, Crouch made millions of dollars and, along with his wife, enjoyed all of “God’s gifts,” including private jets and his-and-hers mansions side-by-side in a gated community. Crouch was one of the leading proponents of the “prosperity doctrine,” the idea that God will award the faithful with material wealth. In other words,  Crouch believed God wants us to be rich, and , as logically follows, those who are poor are clearly not in the good graces of God.

This assertion made me think of the retail workers who often are barely paid minimum wage to serve those of us who stand outside their immaculately kept stores at 4:30 in the morning. Having been a seasonal retail employee, I understand the joys and sorrows of the holiday season and the odd sensation of unbridled, transactionary wealth.

This seems to be part of a larger occurrence. According to Fortune Magazine, the economy has only recovered for those who can afford to buy luxury goods, that is, the wealthy. Making minimum wage and having a customer hand over enough cash to cover rent for six months is an unsettling feeling and, for me, led to a feeling of apathy during the most wonderful time of the year. It was sadly unsurprising to learn that these encounters have negative psychological effects, that they limit an individual’s ability to interact and connect with others, the unfaithfulness to God — Paul Crouch’s take — notwithstanding.

It certainly doesn’t help that the Christmas shopping season, undoubtedly driven by economic voracity, now begins after Halloween, circumnavigating Thanksgiving altogether. This pleonexic binge seems to get worse and worse as time wears on. I think many people would share my anxiety with commercializing or re-branding holidays with roots in spirituality. One of those people seems to be His Holiness Pope Francis.

In a recent papal exhortation, Pope Francis lays out his case against global capitalism and the “dehumanization” often found in the numbness of sales transactions this time of year:

[H]umanity is experiencing a turning point in its history, as we can see from the advances being made in so many fields. We can only praise the steps being taken to improve people’s welfare in areas such as health care, education and communications. At the same time, we have to remember that the majority of our contemporaries are barely living from day to day, with dire consequences. A number of diseases are spreading. The hearts of many people are gripped by fear and desperation, even in the so-called rich countries. The joy of living frequently fades, lack of respect for others and violence are on the rise, and inequality is increasingly evident. It is a struggle to live and, often, to live with precious little dignity…

Just as the commandment “Thou shalt not kill” sets a clear limit in order to safeguard the value of human life, today we also have to say “Thou shalt not” to an economy of exclusion and inequality. Such an economy kills. How can it be that it is not a news item when an elderly homeless person dies of exposure, but it is news when the stock market loses two points? This is a case of exclusion. Can we continue to stand by when food is thrown away while people are starving? This is a case of inequality.

It was this passage that infuriated Rush Limbaugh and caused him to label the Bishop of Rome a “Marxist.” Despite Pope Francis’s affinity for the liberation theology of Gustavo Gutiérrez Merino, limiting his message to a political buzzword is completely misunderstanding his message. In South America, Pope Francis — then Bishop Bergoglio — witnessed large corporations profiting from the cheap labor and low taxes afforded those who do business in the region. Like many industries seeking a low-wage work-force, their industry tends to follow poverty as outlined in the garment business in Colombia and Bangladesh. And while global capitalism has its merits, His Holiness’s point is that allowing ourselves to become disoriented by wealth, money and its material incentives actually detracts from leading a fulfilled life simply because turns us away from one another and, by extension, from God.

So join me, please, the next time you’re waiting for your 50 percent off, in thinking about what all that “great deal” has to offer.

Previous Thanks for a great year of Coffee Talks!
Next POLL: Should we listen to 911 tapes from massacres such as the Newtown shootings?