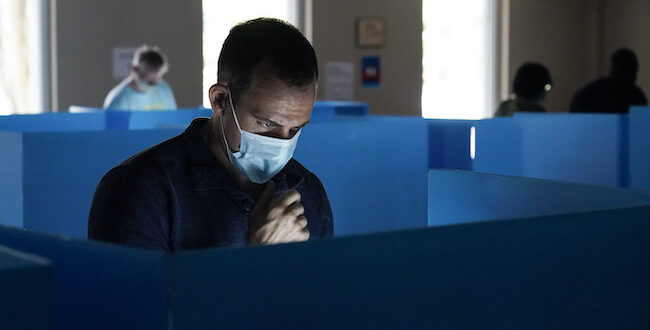 A voter casts a vote in the glow of a voting machine during early voting at the Dunwoody Library after Hurricane Zeta knocked out power in the surrounding areas on Oct. 29, 2020, in Dunwoody, Georgia. (AP Photo/Brynn Anderson)

Polling predictions frustrated and mystified voters on election night, as they did four years ago, when now-President Donald Trump far exceeded the prognosticators’ expectations.

One area where this year’s polls were mostly in line with expectations, however, is religion.

Exit polls conducted with voters by Edison Research for the National Election Pool and by AP VoteCast show that white evangelicals and Catholics changed their minds very little from 2016.

Support for Trump among white evangelicals remained constant (82%), according to VoteCast, but somewhat lower in the NEP exit poll (76%) —  in keeping with 2016 results.

Likewise, Catholics, who evenly split their vote in 2016, were also split between Trump and Democratic challenger Joe Biden this year.

“In recent elections Catholics are pretty evenly divided,” said Mark Gray, director of Catholic polls and senior research associate at the Center for Applied Research in the Apostolate.

The VoteCast exit poll found that 68% of Jews favored Biden and 64% of Muslims did so — roughly in line with past elections. (GBAO Strategies, which often polls American Jews, found that 77% of Jews voted for Biden.)

Unaffiliated Americans or people of no religion favored Biden to Trump 65% to 30% in the NEP exit poll and 72% to 26% in the VoteCast poll.

Those divides have become so expected, said Jones, that we no longer reflect on them.

The VoteCast poll also asked about the frequency of worship attendance. It found that 61% of people who say they attend worship at least weekly voted for Trump, versus 37% who voted for Biden. Those who worship once a month went for Trump over Biden 54% to 45%.

“This suggests to me the level of polarization based on religiosity is still very important,” said John Green, director emeritus of the Ray C. Bliss Institute for Applied Politics at the University of Akron.

Among less-frequent worship attenders, 57% voted for Biden; 41% for Trump.

Previous Ask A Baha’i: Why is Publishing a Photo of Baha’u’llah Forbidden?
Next Ask A Buddhist: Are evil spirits real?