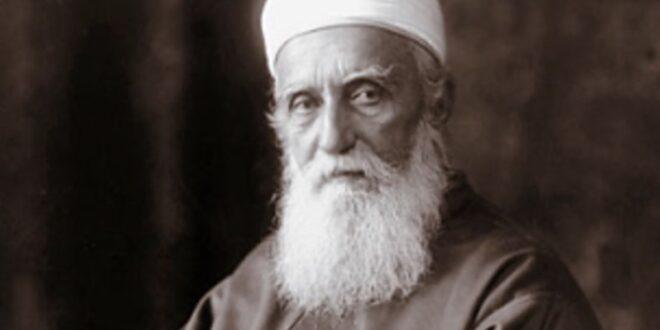 He was barely 8 years old, scion of Persian nobility, when his father was marched 12 miles, bareheaded and barefoot under an August sun, bastinadoed, and cast into Tehran’s “Black Pit,” a dank, lightless former cistern, with murderers and thieves. In later years this son would recall:

“[W]e possessed everything at a nightfall, and on the morrow we were shorn of it all, to the extent that we had no food to eat. I was hungry, but there was no bread to be had. My mother poured some flour into the palm of my hand and I ate that instead of bread.”

As he grew to manhood, he was exiled and imprisoned with his illustrious father, Baha’u’llah, for nearly six decades. Named Abbas, he asked that people call him ‘Abdu’l-Baha, “Servant of Baha,” a reference to his father, whose name means “Glory of God.” Baha’u’llah passed away near Akka, Israel, in 1892, but ‘Abdu’l-Baha was not freed until 1908. At age 64, despite ill health, he began travels that took him to North Africa, Great Britain, Europe, and North America. He passed away a century ago next weekend, Nov. 28, 1921.

Baha’is around the world are commemorating that centenary. Spokane area public events this week will feature a showing of the new film “Exemplar” about ‘Abdu’l-Baha’s extraordinary and exemplary life, followed by discussions.

Interested persons may join Baha’is at the following times and locations:

‘Abdu’l-Baha’s station is unique in religious history. The ancient covenant between God and man, described repeatedly in the Bible and Quran, has never before been written down by a prophet and preserved. Baha’u’llah wrote and signed his Kitab-i-Ahd (Book of My Covenant) appointing ‘Abdu’l-Baha his successor, the “Center” of his covenant.

This unique document conferred unprecedented authority on ‘Abdu’l-Baha to maintain the cohesiveness and direction of his father’s intentions for the Baha’i Faith. ‘Abdu’l-Baha’s own Will and Testament further strengthened the faith’s impetus. Governing authority now resides in elected institutions worldwide, guided by the Universal House of Justice in Haifa, Israel. No individual Baha’i has any personal power or authority.

Baha’is believe such continuing written guidance ensures that their faith will never be riven by schisms, such as those fragmenting earlier religions. Although attempts have been made throughout its 177-year history, the Baha’i covenant has thus far maintained the faith’s integrity and unity as it continues its global spread.

Even in childhood, ‘Abdu’l-Baha supported his father during their early years of exile in Baghdad. Gradually he took on increasing responsibilities as intercessor, shielding his father from unnecessary interruptions by government officials and early Baha’is.

As Baha’u’llah dictated tablets and books, ‘Abdu’l-Baha sometimes served as amanuensis, transcribing those letters and books. He also managed household affairs for the rest of Baha’u’llah’s family. He continued to protect his father as much as possible as they were further exiled to Constantinople, Adrianople, and finally Akka, until Baha’u’llah’s passing.

Following his release in 1908, ‘Abdu’l-Baha promulgated his father’s teachings abroad. He gave interviews and lectures, sometimes many in a single day, promoting Baha’u’llah’s message of the oneness of humankind, with its explicit teachings of the essential unity of all religions, the equality of women and men, the abolition of all forms of prejudice, the necessary harmony of science and religion, spiritual solutions to economic problems, and similar principles.

For 239 days during 1912, ‘Abdu’l-Baha traversed North America coast-to-coast, including visits to Canada. He often gave three or four talks in a single day, greeting dignitaries and skid row residents alike. He demonstrated his message by example. In segregated Washington, DC, at a state dinner hosted by the Persian legation, ‘Abdu’l-Baha seated a young black Baha’i, not on the guest list, on his right, the seat of honor.

In 1920 the British Government presented ‘Abdu’l-Baha with a Knighthood for averting a famine in Palestine following WWI. He had fed the local population with stores from his granaries. At ‘Abdu’l-Baha’s passing, about 10,000 people joined his funeral procession to Mt. Carmel, “Vineyard of God,” in homage to this remarkable man.  Nearly all representative American newspapers devoted accounts and editorials to him.

Mourners of high and low degree, from the High Commissioner of Palestine and other official dignitaries to Jews, Christians, Moslems, Druses, Egyptians, Greeks, Turks, Kurds — all paid respects to this man whose teachings, accomplishments, and lifetime of service are recorded in volumes.

Thus ended a life that began May 23, 1844, the evening before Samuel Morse, on another continent, transmitted the world’s first electronic communication, with its prescient message from Numbers 23:23: “What hath God wrought!”

Previous Supporting Our Reporters: Meet Emma Ledbetter
Next Hanukkah: Light in the Darkness