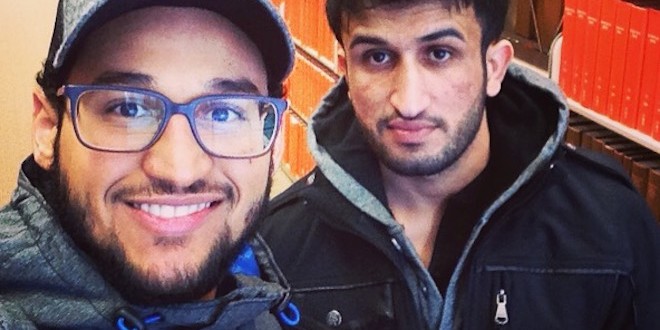 Scroll through the student life webpage at Eastern Washington University, and you’ll find a club for just about any interest imaginable – including a mock trial team, a forensic science club, and an improvisation group called the Damn Dirty Apes. Many religious organizations also meet on Eastern’s sprawling campus of more than 13,000 students in Cheney. At least 3 percent of Eastern’s students are international students, with most of these hailing from Saudi Arabia, Japan, Taiwan and China.

One group that for years hasn’t had its own representation is EWU’s Muslim population. Senior Ahmed Alabdi, majoring in mechanical engineering, and friend Mahboob Daloush, an electrical engineering major and transplant from Seattle, hope to change that. They estimate EWU has at least 500 to 700 Muslim students, possibly more. While the campus’ Saudi Club caters to Muslim students, Alabdi says he and Daloush want to revive EWU’s Muslim Student Association to welcome students from all countries. The college had such a club previously, but it hasn’t been active for several years.

Alabdi and Daloush, prospective president and vice-president respectively, have been planning to start the club for months. They were collaborating with another senior student, but he got his degree and moved on before they could get the club off the ground. In fact, that’s why the old club petered out, they said.

“There used to be one, and it died. People graduated,” Daloush said.

muslimTo counteract that, the two seniors want to train juniors to take over club leadership, and to constantly look for upcoming leaders in the club’s younger ranks.

The biggest reason they want to start the club is to give Muslim students at EWU a place to feel more at home and comfortable, Alabdi said. He envisions it being a place where students could celebrate Muslim holidays like Eid Al-Fitr (celebrated at the end of Ramadan, a month of fasting) together, and meet for prayer and cultural events. He also hopes to work with Spokane’s Islamic Center to invite speakers to campus.

“People from different religions, they have so many questions about us. We’re going to bring scholars to answer their questions,” Alabdi said.

At Daloush’s old school, one of Seattle’s community colleges, he was part of a similar club.

Both say the environment at EWU has been a welcoming and open one, at least in their experience, and they haven’t dealt with any discrimination on campus. Still, they believe the club will be a good opportunity for people to learn more about them and their faith. When the club is approved and meetings began, which Alabdi hopes will happen by the end of November, they’ll be open to the public, including to people who aren’t Muslim.

“We want to welcome everyone,” Daloush said.

Previous A call to act after Paris attacks
Next Ask A Buddhist: Has Buddhism Become Trendy?