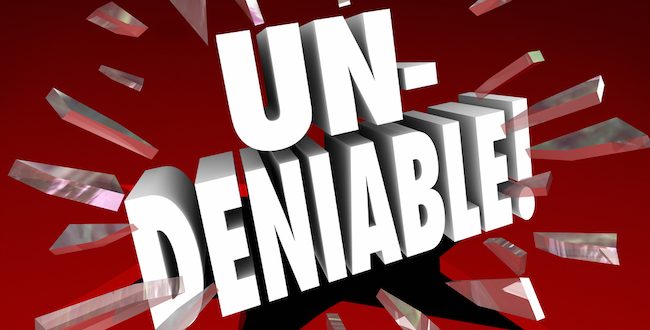 The word, ‘undeniable ’, for me, is one of those words that sounds like nails screeching on a blackboard.  If I ever run for public office, part of my platform might include making it illegal to use, and yet I went searching for such a word for this article, which, in its original form, appeared on my blog, Nothing Forced.  Why look for a word or phrase I so strongly dislike…to best show my readers how some words may do little to open lines of communication.  Here’s what I found.

The Digging Deeper Class of the Lamb’s Chapel in Burlington, NC., holds a weekly, Sunday morning study.  On their blog, I found an article titled, Three Undeniable Proofs of the Resurrection.  As a Christian, I don’t dispute the three proofs, but I do wonder what impact that one word has on people who still have some questions about the whole story of Christianity.

As that type of reader of their article, there’s no way to immediately determine exactly what they meant by their use of ‘undeniable’ or why they chose it over another word.  About all you can do is fall back on the word’s meaning.  According to Merriam-Webster, the basic connotation is: plainly true – incontestable.  And their definition for English language learners makes it even easier to grasp: clearly true – impossible to deny.

Would a reader with doubts about Jesus feel that a discussion would be possible with the author or the members of the Digging Deeper Class?  What if they had visited the church and later read the post; how comfortable would the typical person be toward asking a question about something unchallengeable or irrefutable?  What if a friend hears that word from you or I to support a conviction we hold?

My guess is that more people would turn away from the ‘undeniable’ minded person and I don’t want that happening me.  In fact, just the opposite is true.  I’m hoping that someone will reach out with questions about my beliefs because they feel safe.  And that’s why I have tried my best to leave ‘undeniable’, and other such words, out of my vocabulary.  Got any terms that need to be jettisoned from your speech?

Previous LGBTQ Weddings and Ordination: Learning to Agree to Disagree
Next FāVS and SPR Episode 3: Agreeing to Disagree