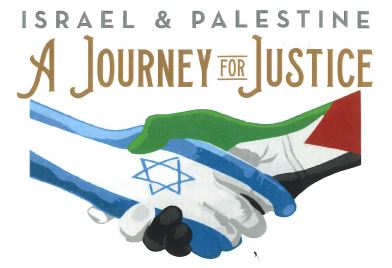 Israel and Palestine: A Journey for Justice

Israel and Palestine: A Journey for Justice

FRIDAY, AUGUST 16TH 5:00PM TO 7:15PM
Rabbi Michael Davis will tell his story of transformation from Zionist to Palestinian solidarity activist. Rabbi Davis hails from a traditional Jewish community with many Holocaust survivors in the north of England, moved to Israel and a West Bank settlement in his teens and moved to Chicago to serve as a Rabbi. Along the way, Rabbi Davis served in the Israeli army and witnessed historic events in Israel and Palestine. This is the story of tens of thousands of Jews who were with Zionism but have gone through an ideological reversal and political awakening.

SATURDAY, AUGUST 17TH PART 1 – 6:00PM TO 7:00PM
So often, advocates for Palestinian justice are labeled as anti-Semitic. BDS (the non-violent call for equal rights for Palestinians) is being criminalized in the U.S. because it has been labeled anti-Semitic. In a world with resurgent hatred for Jews how can people of good faith stand as allies against racism, including anti-Palestinian prejudice?

PART 2 – 7:00PM TO 8:00PM
This is an interactive event where people can explore their feelings and thoughts about White/American/Christian/Jewish racism in a non-judgmental setting. We will have break out groups and there will be agreements to guarantee confidentiality and respectful dialog.

SUNDAY, AUGUST 18TH SERVICES & SERMON Rabbi Michael Davis will provide the sermon today
First Seating – 9:15am to 10:15pm , Second Seating – 11:00am to 12:00pm
Sunday Sermon:
Nationalism intertwined with triumphalist religion is resurgent and the moral choice is clear. Judaism offers a rich heritage of universalism, resilience and standing in solidarity with the oppressed. This return to spiritual roots happens in the turning to see, account for and respond to Palestinian injustice and in a deeper Interfaith united around justice. These values and vision come together in BDS, the unified Palestinian, peaceful call for the world to stand in solidarity with Palestinians until the day when there is equality between Palestinian and Jewish Israelis.