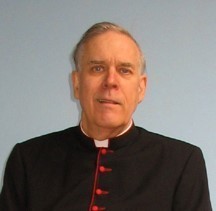 Lent is about embracing the Cross in our bodies with traditional aspects of fasting and almsgiving In the spirit of the Cross, Msgr. Steiner will share an understanding of spirituality in prayer and communion, assisting participants to engage in true Lenten observance in order to partake in Paschal observance.

The Silent Day of Prayer includes the Mass, and the Sacrament of Reconciliation, two conferences, lunch and concludes with the Rosary and Adoration. $40 per person, ($50 with use of a private room for the day). This Day of Prayer is silent.

Bio – Monsignor John Steiner
Msgr. John Steiner, retired, was ordained to the priesthood April 12, 1969. His service as a priest has been a wide mix of both diocesan administration as well as parish ministry. He taught at the diocese’s high school seminary, earned degrees in liturgy and counseling, and has been Director of Liturgy, Chancellor, co-Vicar General and Moderator of the Curia for the diocese. He was invested as a monsignor in 1997, and though retired in 2010, still works in the Spokane Diocese.