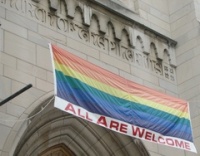 A new voice is emerging in the evangelical community, and it’s turning away from the church’s vocal opposition to homosexuality in favor of a more tolerant attitude.

Researchers at Baylor University found that 24 percent of evangelicals were “ambivalent,” meaning they support civil unions or legal recognition of gay relationships, despite harboring a moral opposition to homosexuality.

“What you have is this increase in people coming out publicly and saying, ‘I don’t want to be a part of this anti-gay rights movement as an evangelical,’” said Lydia Bean, assistant professor of sociology at Baylor and co-author of the study.

The study, “How the Messy Middle Finds a Voice: Evangelicals and Structured Ambivalence towards Gays and Lesbians,” analyzed national data from the 2010 Baylor Religion Survey, conducted by Gallup.

On the acceptance spectrum, these “Ambivalent Evangelicals,” fall between those who oppose civil unions — “Gay Rights Opponents” — and those who affirm homosexual behavior — “Cultural Progressives.”

Also called the “Messy Middle,” this group mirrors the 41 percent of evangelicals labeled “Gay Rights Opponents” when it comes to biblical literalism and religious practice, though they are not as politically conservative.

Compared to the 35 percent of evangelicals who are “Cultural Progressives,” Ambivalents are more likely to be married, have lower levels of education, attend church more frequently, identify as born-again Christians and read their Bible more often. Both groups reported similar frequency of prayer.

While Cultural Progressives remain on the outside rim of the evangelical subculture, Ambivalent Evangelicals occupy a central space within evangelicalism. “They are integrated into the churches,” Bean said of the “Messy Middle.” “They’re very much people in the pews.”

And that’s why their views matter. While they won’t necessarily be leading the charge for gay rights, they’re well known in their churches and what they say (or don’t say) can have an impact.

Ross Murray, who monitors religion and media at the gay rights group GLAAD, said the emergence of Ambivalent Evangelicals mirrors an overall shift among religious people who might still be uncomfortable with homosexuality but don’t support laws that enshrine discrimination.

“They don’t want their religion to be known as the religion against people,” Murray said, pointing to a 2007 report from Christian researchers at Barna Group that showed the top words used to describe Christianity were “anti-homosexual” and “judgmental.”

“I think for a long time the understanding was, in order to be a good Christian, you have to be anti-gay,” Murray said.

A recent Pew Research Center study found that 73 percent of lesbian, gay, bisexual or transgender adults said evangelical churches were unfriendly toward them, while only 3 percent considered them friendly. Another 21 percent called these churches neutral.

The Baylor report cites the recent apology and disbanding of prominent “ex-gay” group Exodus International as further evidence of a shift in evangelical attitudes toward gays.

Alan Chambers, former Exodus president, said he could not apologize for his biblical beliefs about sexuality and marriage, but these beliefs “will never again interfere with God’s command to love my neighbor as I love myself.”

“What we’re seeing is what happens when ideology bumps up against lived experience,” Krattenmaker said. “It becomes increasingly difficult to carry on as if gay people are going to be the downfall of America.”

Glenn Stanton, director for Family Formation Studies at Focus on the Family, said the Messy Middle is a group without a well-tested conviction. He said it’s not hard to understand why young evangelicals become ambivalent toward homosexuality, because of how conservatives are portrayed on sitcoms and in the news.

“Conservative people who are opposed to gay issues are just seen as bigoted bumpkins,” Stanton said. “How are you not going to hold that position?”