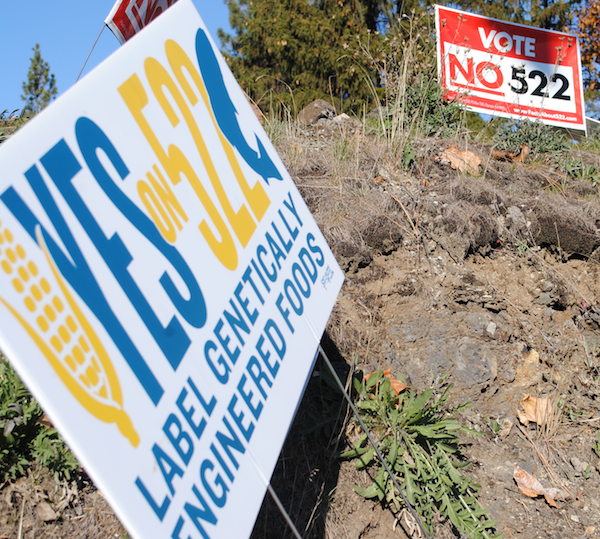 The ethical, spiritual side of I-522

Grocery aisles in Washington State could be a little different in 2015 if voters approve Initiative 522 next week.

Most of the processed foods and beverages that dominate the shelves are made with some sort of genetically modified crop — like soy or corn. The ballot measure would require those products to be labeled.

Campbell Soup, PepsiCo and Kellogg are among the companies pumping money against the I-522 initiative, claiming the measure is misleading, would hurt farmers and raise grocery costs.

Proponents of the initiative, however, say it’s an ethical issue about giving consumers the right to know what they’re eating.

“What people want is labeling so they can have a choice about what they’re putting into their bodies. It’s their choice what’s healthy for them, and not somebody else’s” said Ron Cully, a grass roots activist for I-522.

However some researchers say there’s no evidence that GMOs pose health and safety risks.

Monsanto, a chemical and agricultural biotechnology company that opposes I-522, claims on its website that plants and crops with genetically modified traits have been tested thoroughly and that there has been no credible evidence of harm to humans or animals.

Ellen Maccarone, associate professor of philosophy at Gonzaga University, said there are both pros and cons to GMOs.

“If we were talking about golden rice in India preventing childhood vitamin A deficient blindness, that would be a pro. But generally here we are not talking about those things. The cons have to do with a wider set of issues about how food is grown, who has control over it, and how it is processed and how that affects health and the environment,” she said.

Maccarone said this shows that there’s a growing interest in consumers wanting to know where their food is coming from.

“The increase in farmers markets and the like indicate that people are thinking about food and the food economy differently than just a few years ago,” she said. “Food has always had a central role in people’s spiritual, ethical and cultural lives. Giving them information so they can do this with more integrity is something we shouldn’t be afraid of.”

If the measure passes, Washington would be the first state to pass a mandatory GMO food-labeling law with no stipulations.

Previous Seeds, society and stewardship, oh my!
Next Vatican seeks input from the pews on marriage and family issues