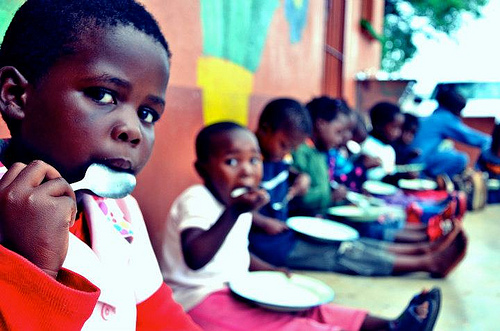 “A generous and noble spirit cannot be expected to dwell in the breasts of men who are struggling for their daily bread.” — Dionysius of Halicarnassus, Greek scholar (fl. c. 20 B.C.) 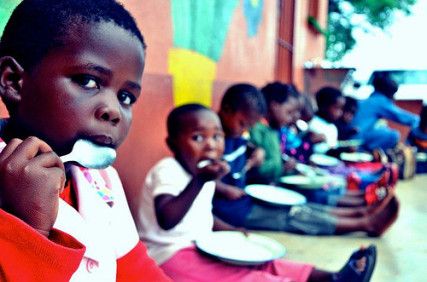 When I was asked to write an article for a panel on “ethics and money,” my first thought was, “How could I write a post on that? I’ve never had any money.”  People think of the wealthy in discussions like these: “With great power, comes great responsibility.” But not often do people think of the non-rich.

I grew up middle class in Nebraska, and I am a child of the 1980s. There were these devastating pictures of Somali children all over the news and commercials. The response of parents, perhaps all over, was, “Eat your vegetables; there are children starving in Africa!”

“Eat your vegetables!” Children are starving some faraway place on a map. This is the best excuse you can think of to get me to eat peas, which, even to this day, I still don’t like the taste of?

Here’s the thing that troubled me as a child: I would have happily given away my peas to anyone who would have eaten them. How would I transport these peas to these starving children so far away?

It was as though the nag, “Eat your vegetables! Children are starving in Africa!” was powerful enough to transport the dreaded peas from my belly to theirs. That would have been optimal. I guess I even remember eating to the point of fullness, then being nagged and then eating more. We called it, “The Clean Plate Club.” Metaphorical points were awarded. My oldest brother, Chris, would manage to push around the food on his plate while declaring how delicious it was and not eating it. Mom had smarted on to that one by the time I was a kid, so that tactic wasn’t available to me.

Even as a child, I didn’t understand how me eating my food would somehow take away the suffering of a person who didn’t have enough to eat. I simply could not conceptualize a world where drought, government corruption, ineptitude or indifference of the people of good conscience could enable a whole section of the earth to starve to death. But it was happening.

The directions of my theological wanderings at that time went along the lines of: “Well, why don’t they just go to the grocery store?” or “Why don’t people help them?” or “Why don’t they just go to their pantry and get some Pork and Beans?” (I don’t like pork and beans either.) or “Why are their bellies so big if they are starving?” or “Well, maybe they should pray harder.”

I’m not really sure any of these questions were explained to my satisfaction — but I would have been eight or nine or 10 years old — and surely, other things must have come to the center of my attention.

Yet I saw myself in those children; I saw human beings who were suffering who I was mostly powerless to help. I knew that me having food and them not having food was an accident of fate, that I could have been them, looking so pathetic with flies crawling all over their faces. Yet I never, not once, felt empowered to either say, “No thank you, I’m full (and I don’t like peas, actually)” or say “I’d really like to do something positive about those children starving in Africa. Could you help me do that?” and then do something positive to alleviate their suffering.

As an adult, I am aware that human beings produce enough food for every person on the planet, several times over. Human beings could grow and distribute this food, yearly, monthly, etc., and no one would ever have to go hungry again. But where’s the profit in that?

Surely, someone (or many someones) must have the political will and knowledge to bring starvation to an end, to ensure that every person on the planet has clean drinking water in his or her village, to provide medical supplies to all and knowledge to mitigate illness and disease.

But whose palms get greased? How does people having enough to eat sell newspapers? (Or ads on news shows and websites, really?) I mean, can you put a dollar price on the feel-good feeling you get when you make a difference? Knowing that you made a difference? Do you give money to pan-handlers? Do you donate to food banks or give money?

Sometimes, it takes natural disasters to bring about action by people of goodwill. But then they give $10 to UNICEF and don’t do anything else. (I have done this, feeling bad that it wasn’t more and thinking of Audrey Hepburn.) Drought isolated an already civil-war-stricken Somalia. Someone with a photographic gift captured their suffering and National Geographic printed it. Suddenly, the world knew that these beautiful children and their families were starving to death. Their suffering could be seen.

Did the world swoop down and save them? Did people of goodwill everywhere, all at once, realize that this was wrong and could not be tolerated? Was there some person or entity that had the power to stop it, but continued to let it happen? Yes and no. Relief agencies did a lot of good work down there, but still, even after all that, many people died.

Here’s the conundrum for me: who makes money off of those children’s starvation? I mean, when we were visiting London in the ’80s, we spent our two pence at Save the Children, didn’t we? (Please, I understand that there is so much privilege in international travel — being able to afford it, for starters.)

I think of those pictures now, still in my head, with the consciousness of a mother: I cannot imagine the agony and despair of the mothers of those children. I also think that the phrase, “People are starving in Africa,” occludes the fact that people are going hungry in America, in my community.  They call it “food insecurity” now, and a lot more people are food insecure today than they have been in the past. This knowledge layered against young girls (and some boys) intentionally starving themselves as a response to their world — anorexia nervosa and other eating disorders — is troubling.

How all of this relates to ethics and money: ethics is the art and science of discerning what is right, holy and just and then living into those values. It’s an ongoing process, not just some ideal.  Money is a tool. Like any tool, it can be used for good or ill. Somehow, when ethics goes up in a cage match to the death against money, money usually wins.

Is the knowledge of other people’s suffering enough to stir good-hearted people into action? Lately, I don’t think so. Maybe the knowledge, with a slick ad campaign and a two-click, super-easy donate button. Am I jaded? Or realistic?

We have a deep-seated feeling of powerlessness in our culture: Yeah, global warming; I recycle. Yeah, chemicals spilling into the Gulf. Yeah, ADHD … Squirrel! Yeah, war and chemical weapons, but the football game is on (see this post by The Oatmeal).  I mean — it’s despair layered on top of distraction. We live in a world that has layers of trauma and co-occurring disorders. Our compassionate response to the world must be just as nuanced. Yet we must also take care not to develop compassion fatigue or succumb to our own despair.

We can change the world — but it, too, will change us for the attempt. Yet we must attempt in order to live up to our visions of what we are.

Join us at 10 a.m., Oct. 5 for our next Coffee Talk for a conversation on Money and Ethics. The discussion will take place at Chairs Coffee.  Martin is a panelist.