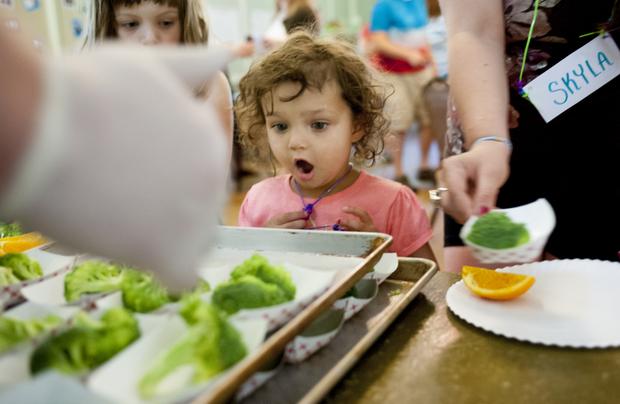 This article reprinted with permission from The Spokesman-Review, our news partner.

The sight of broccoli brought a look of joy to Naomi Sulpizio’s face. At her lunch table, the 3-year-old dunked the florets in ranch sauce and left smears of white on her cheek as she gobbled each piece.

The green vegetable accompanied Sulpizio’s black bean chili, a cheese sandwich and orange slices Monday at West Central Episcopal Mission, a new free summer meal site for those 18 and under.

“We opened the doors and just hope kids will come,” said Tracey Waring, a church member who helped organize the 10-week program.

The Episcopal Diocese of Spokane’s Stone Soup Café is a pilot meal site in West Central, where more than 95 percent of the neighborhood’s 1,900 children live in poverty.

Free summer meal programs have historically been at schools or community centers. They have been in place since 1968. The regional church is an example of the U.S. Department of Agriculture’s effort to reach more kids by expanding sites to groups who could safely sponsor meal programs.

The effort is a collaboration of congregation members around Spokane. As a sponsor, the Diocese can expand the number of sites in Eastern Washington and North Idaho by helping congregations operate their own meal sites.

“It’s all about working together,” Waring said. “We don’t have to stay in our own neighborhoods to make an impact.”

The West Central Episcopal Mission sits in the heart of the neighborhood. Besides meals, kids can participate in arts, crafts and recreational activities from 8:30 a.m. to 12:30 p.m. Monday through Friday until Aug. 29.

“Creation stations” were set up in a multipurpose room where meals are served. For the first day, the children made memory boxes and nametags for their water bottles. Children had used sidewalk chalk to decorate the walkway. Organizers learned if they also host activities, children are more likely to stay and eat.

“I just came here to play,” said 6-year-old Natalie Aikens as she sucked on orange wedges during lunch.

About 25 children ate breakfast and lunch on the program’s first day. Even though Waring hopes to serve twice that many children, Waring said Monday’s attendance made “my heart go pitter patter.”

Waggoner hopes “this will be a model for what other churches can do.”