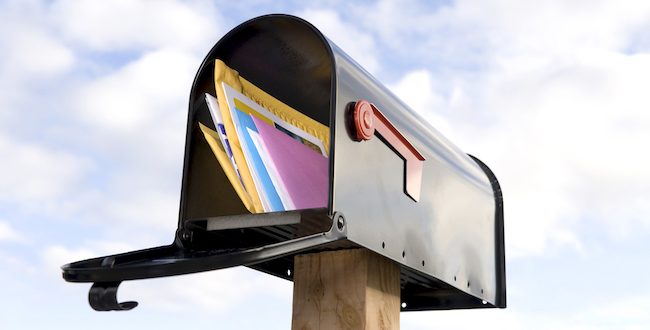 A mailbox full of mail/DepositPhoto

Enter Holy Week with the quiet ministry of sending a card

One of my favorite, quiet ministries is that of writing and mailing cards.

In 1996, there was nothing more thrilling than receiving an email. The personal computer had become commonplace some 10 or 14 years beforehand (my memory, ever fallible, is that our Commodore 64 arrived in our home in 1982, sometime in the year that I turned 10). But with the exception of the occasional clunky, modem-based interactions with what we called bulletin boards, the computer was a stand-alone tool, a sophisticated answer to a typewriter. If you wanted to share something that you had created on it, you needed to print it out or put it on a floppy disk and physically transport it to another person.

Email changed that. Suddenly, we were sending and receiving letters almost instantaneously. Here, on my screen, was a message written by my cousin in Ontario not a week ago or a day ago but minutes ago. It was amazing.

But like a lot of amazing things, email soon became a little tarnished, a little cheap, a little overwhelming. Today, my email features a half-dozen invitations to get outraged about politics and a dozen invitations to buy neckties and shoes. In amongst all of that are the efforts to schedule meetings (if the Ancient Greeks had lived into the email era, one of Hercules’ tasks would’ve been using a computer to get eight people to agree on a time to meet) and the occasional attempt to engage in online conflict resolution, an exercise that just never goes well.

Don’t misunderstand me: email is an important tool. If you’d like to arrange a visit with me, email is probably the best way to do that. But like a lot of tools, my relationship with email is strictly functional. I don’t love it, any l than I love my vacuum cleaner or my toaster.

The handwritten card, delivered to your home by a uniformed employee of the federal government, is quite another matter. I love sending and receiving those. And maybe I love them precisely because they are everything that email is not. Much as Alice Waters and friends brought us (or more accurately, reminded us of) the Slow Food movement, so does the handwritten card remind us of Slow Communication. There is holy effort in finding the card, in digging out the pen and drawing it across paper, in placing the stamp on the envelope, in taking it to the mailbox. In the catechumenate, we have remembered the classic definition of a sacrament: an outward and visible sign of an inward state of grace. A handwritten card is a sacrament. When it arrives in the mail, you hold in your hands the beautiful evidence that we are in relationship.

It is nearing the end of Lent, it is the cusp of Holy Week. And a parishioner shared with me recently that one of her practices this Lent has been writing and sending cards. And many of you will know that another parishioner has a year-round ministry of writing prayers onto paper and sending them forth. (I received one of those prayers in the mail when, some four years ago, I was getting ready to come to Grace. It melted my heart a little.)

Just like me, so many people love this practice.