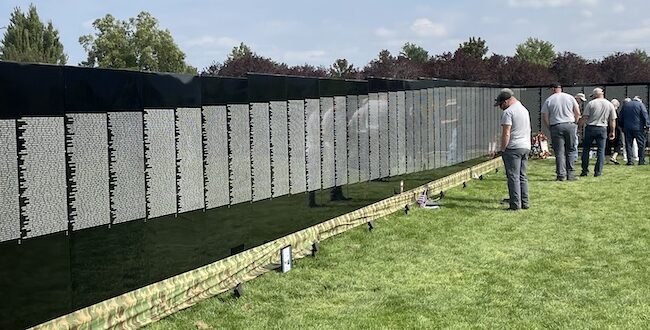 It’s a scene repeated multiple times a day at Pavillion Park in Liberty Lake this weekend – the slow walk, the pause, the reaching out to trace a name with a finger.

The Moving Wall, which arrived in Liberty Lake with a police escort Thursday morning, is a replica of the Vietnam Veterans Memorial wall in Washington, D.C., that lists the names of all 58,479 American soldiers who died in the Vietnam War. The wall will be on display and available to the public 24 hours a day through Monday at 10:30 a.m. The visit was organized by the Gallant Guards of Liberty.

As people slowly and quietly walked the length of the wall Friday morning, the names of the fallen echoed in the park. Volunteers have signed up to spend the next several days reading each name that is listed on the wall.

Some who visited were too young to have served in the war, but were perhaps looking for the name of a father, cousin or uncle. Others wore hats or t-shirts identifying themselves as Vietnam veterans. Volunteers were there with books to look up names so they could write down on a slip of paper the wall panel and line number where a certain name could be found.

One man asked for assistance finding a name, then walked to the proper panel. After finding the name he sought, he stood silently in front of the wall for several minutes. He then turned away and stared off into the distance for a few minutes before turning and walking away to leave.

“It’s kind of overwhelming when you see the number of names,” said another man as he left the wall.

Tom Russell, who served in the headquarters division of the 25th Infantry in Cu Chi in 1967 and 1968, brought his wife, son, nephew and his nephew’s wife to see the wall. The Coeur d’Alene resident has visited a traveling wall once before as well as the memorial in Washington, D.C.

“The one in Washington, D.C., is overwhelming,” he said. “It’s twice as big, lots of people there.”

He said he’s glad there are traveling walls so people who will never get a chance to go to Washington, D.C., can still see and experience the memorial. “It’s quite a thing,” he said.

Russell’s unit had a lot of people come and go, so he doesn’t remember many names after all this time and isn’t looking for a particular name on the wall.

“There’s a lot of things I try to forget,” he said. “There were a lot of bad times, but there were some good times. I met a lot of nice people.”

It didn’t get any better when his service was over. “The bad part was coming back and people treating you badly,” he said. “People called you names and spit on you.”

The Rev. Joe Niemiec, who retired from the Center for Spiritual Living a few years ago, served in the Marines for nine years and spent about 18 months of that time on a helicopter carrier off the coast of Vietnam working as a structural helicopter mechanic in the early 1970s. He’s visited a traveling wall before as well as the permanent memorial in Washington, D.C.

“You’d be surprised at how respectful people are,” he said. “At least I was, given how we were treated when we came back.”

He said he found that visiting the wall can be an emotional, spiritual experience. He said he knows that many of the people who were drafted and served in the war were young, had little to no higher education and were more likely to be minorities.

“It was just awe inspiring to stand there and realize how many had given their all, often for something they didn’t believe in,” he said. “It just touched my soul in a place that hadn’t been touched before.”

He said he believes that visiting the wall or one of the traveling replicas can be a healing experience for a Vietnam veteran as long as they are open to that healing. But some would have to overcome both their post-traumatic stress and their anger toward people who were against the war.

“What I have seen is a tremendous amount of veterans still have no forgiveness for things that happened during the war,” he said. “They’re still holding onto it. I believe if you hang on to that anger, there won’t be healing.”

Niemiec said that he has come to realize that people who were against the war were doing the best they could at the time. “I don’t have to forgive them,” he said. “I can just be compassionate toward who they were at the moment.”

Even nearly 15 years after he visited the Vietnam Memorial, Niemiec said he still gets emotional thinking about the experience. He found the name of his cousin who died in Vietnam in 1968 and left his ribbons under his name.

“It can be a very deep and cleansing way of finally saying goodbye to their friends,” he said. “I was able to find my cousin’s name and say goodbye.”

While the Moving Wall is in Pavillion Park, the Washington State Fallen Heroes Project also has banners on display honoring local men and women who died while serving in the military after 9/11.

The City of Liberty Lake has announced that the tennis courts, splash pad, playground and skate park in Pavillion Park will be closed while the Moving Wall is on display.

Previous FāVS Is Reading book club hosts an evening discussing ‘Torn: Married to a White Supremacist’
Next Should Christians believe the U.S. Constitution is divinely inspired?