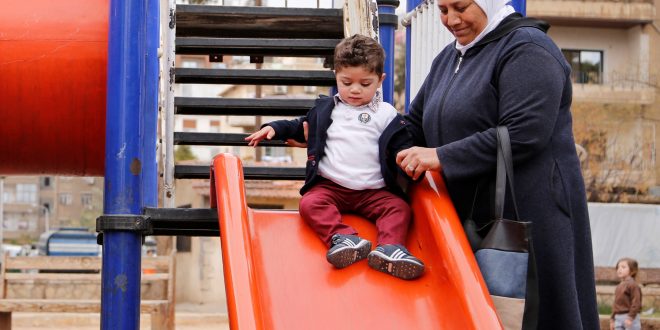 Hajar Saleh helps her grandson Jaafar playing on a slide inside a garden in the Damascus district of Mezzeh, Syria March 30, 2017. REUTERS/Omar Sanadiki

DAMASCUS (Reuters) – When Jaafar’s grandmother recognized him by his birthmark in a Turkish orphanage, months after his parents were killed fleeing Syria’s civil war, she held him tight, screaming for joy.

The story of how Hajar Saleh, a 47-year-old nurse, spent fraught weeks tracing her grandson in a foreign country and many months trying to bring him home underscores the terrible plight of Syria’s thousands of lost children and their families.

Jaafar was only three-months-old when his parents, Amina Saleh, 23, and her husband Imad Azouz, 25, decided to flee their home in the Sayeda Zeinab suburb of Damascus, close to a frontline, and seek a better life for their family abroad.

Palestinian refugees whose families had been in Syria for decades, they lacked legal travel documents, so they gathered their scant savings and paid a smuggler to guide them across the border into Turkey from an area held by Kurdish groups.

A last photograph Amina sent her mother before the attempted border crossing in January 2016 shows her smiling warily at the camera, wearing a heavy winter coat and black headscarf and holding Jaafar, a tiny pink baby in yellow romper suit.

But when they tried to cross the frontier a few hours later with dozens of other refugees in a smuggler convoy in northeast Syria, the Turkish border guards who battle Kurdish insurgents there opened fire. Amina and her husband were killed.

Little Jaafar escaped unscathed, protected by his father’s body, and was gathered up by survivors of the shooting and taken to the nearby Turkish city of Mardin, where they gave him into the care of a local judge.

Hajar’s account of the ill-fated border crossing comes from them and from what Turkish authorities told the United Nations children’s agency UNICEF, she said.

Before they left Mardin, some of the refugees phoned Hajar to inform her of the fate of her daughter and son-in-law, and to give her the name and phone number of the judge, the start of her months-long odyssey to reclaim her grandson.

“I still have two sons, but Amina was my only daughter. My friend and secret keeper,” said Hajar apologetically, as if to justify her frequent sobbing and the black clothes of mourning she still wears for the dead couple.

UNICEF told Reuters in March it had documented the cases of 650 separated children in 2016 alone, but that the likely number of undocumented cases was probably far higher.

Since the war began in 2011, hundreds of thousands of Syrians have been killed and about half the country’s pre-war population made homeless, large numbers of them children.

After learning about her grandson’s plight, Hajar approached every local and international organization she could think of seeking help.

Eventually, UNICEF and the UN’s refugee agency UNHCR located Jaafar and secured travel documents for her to visit Turkey to pursue the legal process of proving kinship and claiming him.

“My daughter always came to me in my dreams and would beg me to bring her son back and raise him,” she said, speaking in the UNICEF headquarters in Damascus.

Little Jaafar, now 16-months-old, wide-eyed, smiling and well-groomed, was meanwhile snatching at everything in his reach and fidgeting to escape his grandmother’s lap for a few steps before quickly returning to her.

Hajar’s journey to the orphanage in Mardin was nearly over before it began, a victim to the chaos inflicted by the attempted coup d’etat in Turkey last summer, a day before she was scheduled to fly, which closed all the country’s airports.

With her Lebanese visa running out, Hajar only managed to fly to Ankara five days later with a day to spare before she would have been returned to Syria.

Unable to speak Turkish and having never traveled before, she was lost for five hours while changing flights in Istanbul before UNHCR officials found her and guided her onwards. After a 16-hour bus drive from Ankara, she finally reached Mardin.

As soon as Hajar saw Jaafar in the Cucuk Evleri Sitesi Mudurlugu orphanage, she recognized him by the prominent birthmark on his forehead, she said.

“I held him tight, crying and screaming in joy and I fainted afterwards,” she said. “When I woke up I held him tight again and sobbed. He stared at me. He didn’t cry or feel afraid. Instead he wiped my tears away,” she added.

With little money left and the weather turning colder, Hajar’s efforts to bring Jaafar home were further complicated by the Turkish government’s purge of the judiciary in the aftermath of the attempted coup, she said.

It took three months to prepare a DNA test and find a judge who could verify it and give her permission to take home her grandson.

“Every time a judge assumed my case, he would be replaced soon after,” she said.

The Turkish authorities told her where her daughter and son-in-law were buried in unmarked graves, but she was unable to visit them. Even when they finally tried to fly back in December, a blanket of heavy snow delayed their journey for days.

But now they have returned to her home in Sayeda Zeinab.

“Jaafar is full of energy and loves putting himself in trouble,” she said. “But for the sake of my daughter, I will raise him as well as I can.”