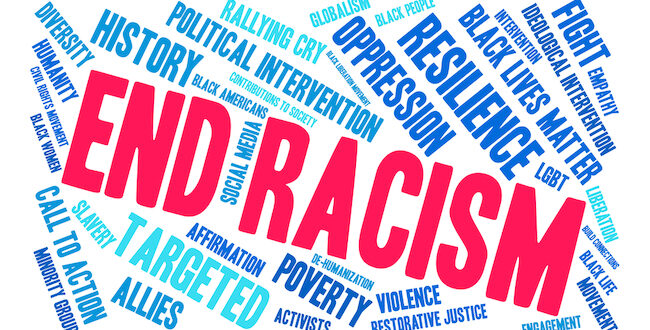 Different religions have different perspectives. Many don’t recognize women — half the population — as co-equal with men. For centuries the Bible has been used first to justify slavery, then to condone systemic racism by segregating neighborhoods, public areas, schools, transportation — and churches. “It is appalling,” said Dr. Martin Luther King, Jr., “that the most segregated hour of Christian America is 11 o’clock on Sunday morning…”

The New York Times wrote, “As racial violence and the white backlash increase in the United States, one question arises sharply: why doesn’t the church do something about the racial problem?” That was published in 1964.

This year, on Juneteenth, the American Baha’is released “A Message from the Baha’is of the United States” with suggestions for overcoming systemic racism. Since the early 1900s, Baha’is have collaborated with others to alleviate racism by actively recognizing the oneness of humankind. The letter begins:

The Bahá’ís of the United States join our fellow-citizens in heartfelt grief at the deaths of George Floyd, Breonna Taylor, Ahmaud Arbery, and so many others whose lives were suddenly taken by appalling acts of violence. These heartbreaking violations against fellow human beings, due only to the color of their skin, have deepened the dismay caused by a pandemic whose consequences to the health and livelihoods of people of color have been disproportionately severe. This has come to pass against a backdrop of longstanding racial injustice in virtually every aspect of American life. It is clear that racial prejudice is the most vital and challenging issue we face as a country.

Yet, amidst these tragedies, there are also signs of hope. Countless citizens have arisen to proclaim the truth that we are one nation, and to demand specific actions to address the pervasive inequities that for too long have shaped our society. We have remembered who we aspire to be as a people, and are determined to make a change for the better. This moment beckons us to a renewed commitment to realize the ideal of E Pluribus Unum—out of many, one—the very ideal upon which America was founded.

To create a just society begins with recognition of the fundamental truth that humanity is one. But it is not enough simply to believe this in our hearts. It creates the moral imperative to act, and to view all aspects of our personal, social, and institutional lives through the lens of justice. It implies a reordering of our society more profound than anything we have yet achieved. And it requires the participation of Americans of every race and background, for it is only through such inclusive participation that new moral and social directions can emerge.

Whatever immediate results might come from the current demonstrations, the elimination of racism will require a sustained and concerted effort. It is one thing to protest against particular forms of injustice. It is a far more profound challenge to create a new framework for justice. Our efforts can only succeed when we learn to build relationships with each other based on sincere friendship, regard, and trust, which, in turn, become pillars for the activities of our institutions and communities.

It is essential for us to join hands in a process of learning how to create models of what we want to see in every dimension of American life, as we learn to apply the principle of oneness through practical engagement and experience. To this end, we offer the following thoughts.

An essential element of the process will be honest and truthful discourse about current conditions and their causes, and understanding, in particular, the deeply entrenched notions of anti-Blackness that pervade our society. We must build the capacity to truly hear and acknowledge the voices of those who have directly suffered from the effects of racism. This capacity should manifest itself in our schools, the media, and other civic arenas, as well as in our work and personal relations. This should not end with words, but lead to meaningful, constructive action.

There are already significant efforts underway to learn how to create models of unity in neighborhoods and communities throughout the nation. Bahá’ís have been persistently engaged in such efforts for many years. The aim is not unity in sameness—it is unity in diversity. It is the recognition that everyone in this land has a part to play in contributing to the betterment of society, and that true prosperity, material and spiritual, will be available to us all to the degree that we live up to this standard. We should earnestly discover what is being done, what truly helps to make a difference, and why. We should share this knowledge throughout the country as a means of inspiring and assisting the work of others. If we do this, we could soon find ourselves in the midst of a mass transition toward racial justice.

The second part of the letter will be posted tomorrow.