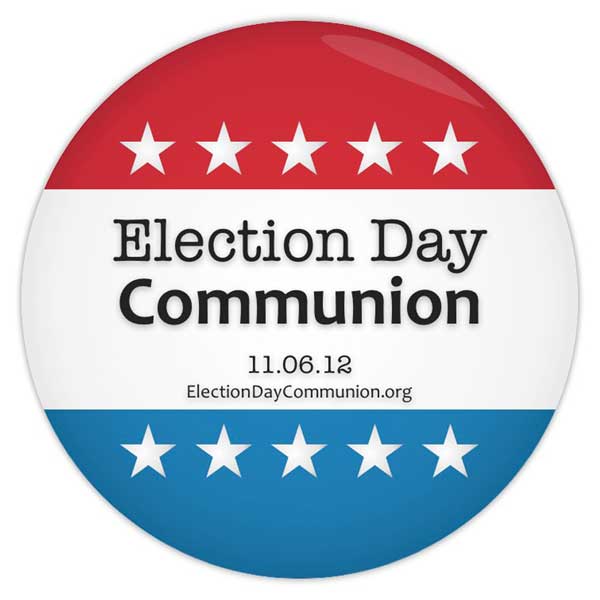 Come to me, all ye who are weary of negative political ads and burdened by the wounds of a brutal campaign season. I will give you rest.

That twist on the call of Jesus from the Gospel of Matthew is resonating this year as more than 400 local churches prepare for a new tradition: Election Day Communion. As voting winds down on Nov. 6, people of every political stripe will leave their respective partisan bunkers and line up side by side to receive the sacrament.

“We’ll be saying to people: ‘Look around. There’s probably someone here who voted for the other guy,’” said Justin Barringer, an editor who’s helping organize an ecumenical service at a homeless shelter in Lexington, Ky. “Yet you’re sitting here sharing the body and blood of Christ as you ought to.”

What began in 2008 at Springdale Mennonite Church in Waynesboro, Va., has now snowballed into a movement. Churches representing more than a dozen denominations will host evening services in 46 states. More than half of participating churches have signed on since Oct. 1.

The effort reflects the work of young pastors and lay people – many in their 20s and 30s – who’ve parlayed a $35 budget into a website: electiondaycommunion.org.

“Many, including Christians, are looking for ways to be involved in the public square that transcend the sour tone and brutal tactics,” said Jonathan Merritt, the 30-year-old author of “A Faith of Our Own: Following Jesus Beyond the Culture Wars.” Election Day Communion, he said, reflects the public’s dissatisfaction with government, political parties and movements such as Occupy and the Tea Party.

For organizers, Election Day is ideal for remembering the church’s nonpartisan mission: to bridge personal divides, refocus allegiance to God (not party) and work for justice beyond the ballot box. But whether the goal is to restore a church corrupted by partisan politics, or help mend a torn nation, will depend on local interpretation.

Congregations are warming to the event at a time when many long for new types of relationships between religion and politics. Some 60 percent of Democrats and 58 percent of independents say houses of worship should keep out of political matters, up from less than 50 percent for both groups in 2000, according to a Pew Research Center survey released earlier this year. Forty-four percent of Republicans agree.

The movement has gained traction in political battlegrounds – Indiana, Pennsylvania, Ohio and Virginia – that have relatively large populations of Mennonites, who shunned politics as recently as 50 years ago.

Some states where the religious right is strong, such as Mississippi and Utah, currently have no Election Day Communion services planned.

When the faithful come together on election night, they’ll begin with confession, as is customary for Communion services. This time, however, the list of sins will include political ones. At Staunton Mennonite Church in Staunton, Va., Pastor Kevin Gasser plans to call for repentance of “political idolatry, excessive partisanship and our divisive nature.”

“Our participation in the party system, Democrat and Republican, has caused us to be passionate about things that look very different from the passion of Jesus,” said Mark Schloneger, who led the first Election Day Communion service four years ago and now pastors North Goshen Mennonite Church in Goshen, Ind. “That’s where I believe we need to repent.”

Still, messages are apt to vary according to how participants interpret the symbolism of the Election Day sacrament. Those who gather for a Communion service on the National Mall in Washington, D.C., will hear assurance that the nation can do better than gridlock if it follows the church’s reconciling model.

“This is about healing the partisan divide in our country,” said Pastor Morgan Guyton of Burke United Methodist Church in suburban Burke, Va., who will serve Communion Nov. 6 on the Mall.

“Our task as the church is to model being in community with people with whom we have differences of opinion, valuing their perspectives and trusting in the bond that we have.”

In Lexington, they’ll hear a different call: to heal the church by casting out tensions that grow from partisan identification. Gasser, from Staunton, Va., recalls a disturbing day from 2004 when one churchgoer targeted a Bush supporter during fellowship time and started chanting, “Kerry! Kerry!”

“It was just so out of place and so strange,” Gasser said. “It seemed almost like an athletic event. … That caused some discomfort because those two were always labeled” according to their political leanings.

While organizers say they’ve encountered little pushback, they still face challenges. One involves dispelling the assumption that the intent is to bless the election, Gasser said.

“I fear this might be seen as one more way of glossing over” how political differences divide Christians, Schloneger said. He hopes the events will instead inspire the faithful to tackle problems, from unwanted pregnancy to poverty, without depending on lawmakers to act first.

Previous Car accidents, weddings, and God
Next An ode to Biblical Football