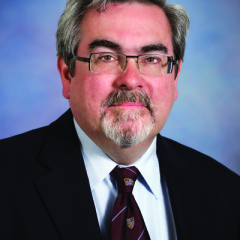 The Evangelical Lutheran Church in America has elected its first openly gay bishop, the Rev. R. Guy Erwin, to oversee churches in Southern California, four years after the church allowed openly gay men and lesbians to serve as clergy.

Following a wider trend within other mainline Protestant denominations to appoint gays and lesbians to leadership positions, the ELCA’s five-county Southwest California Synod elected Erwin on Friday (May 31) to a six-year term.

“It’s historic and a turning point, as was the ordination of women,” said Martin Marty, the dean of American church historians at the University of Chicago and a member of the ELCA. “This is just one of many indications that the culture has shifted.”

Erwin, who holds a doctorate, bachelor’s and two master’s degrees from Yale University, has spent several years teaching university and seminary classes. He currently serves as a pastor at Faith Lutheran Church in Canoga Park, Calif., and a professor of Lutheran confessional theology at California Lutheran University.

Erwin waited until 2011 to become ordained, after the denomination’s 2009 change to allow people in “publicly accountable, lifelong, monogamous, same-gender relationships to serve as rostered leaders of this church.”

The ELCA, which has lost members nearly every year since its founding in 1987, saw the biggest drop when it lost nearly half a million members in 2010 and 2011, the most recent numbers available. The ELCA is the largest Lutheran denomination in the U.S., with more than 4 million members in 9,638 congregations.

The ELCA’s election of Erwin did not come as a surprise to many observers, as the provision for an openly gay leader has been in place for four years now.

“I don’t expect it to cause a lot of ripples, frankly,” said the Rev. Michael Cooper-White, president of the Lutheran Theological Seminary at Gettysburg (Pa.).

Those who would have been troubled by the decision left four years ago when the ELCA changed its stance on sexuality, he said. “This is not huge news, the same way it was news four years ago,” he said.

Some U.S. congregations have already left the ELCA to join the North American Lutheran Church, and some overseas churches have severed ties with the denomination. Earlier this year, the Lutheran church in Ethiopia parted ways with the ELCA.

“In one way (Erwin’s election is) not earth-shaking, but it’s a decisive move by the ELCA,” said Robert Benne, a philosophy and religion professor at the Roanoke College, who is a member of the ELCA but is involved in the NALC. “There’s a big sorting-out going out in American and world Christianity, so it’ll have some repercussions, but the larger repercussions will be worldwide.”

The election is likely to further strain relations between the ELCA and the nation’s second-largest Lutheran body, the more theologically conservative Lutheran Church-Missouri Synod. The two bodies work together on disaster relief, refugees and immigration but hold starkly different positions on social issues.

While nearly twice as big, the ELCA has not seen the same kind of public division as the Episcopal Church, which confirmed V. Gene Robinson, an openly gay priest, as bishop a decade ago. The Episcopal Church has fought several court battles with departing congregations over property ownership.

Erwin will serve alongside the first openly lesbian Episcopal bishop, Mary Glasspool, who was elected as a suffragan (assistant) bishop in Los Angeles in 2009.

Previous Institutional church and social justice, part 3
Next You have searched me and you know me