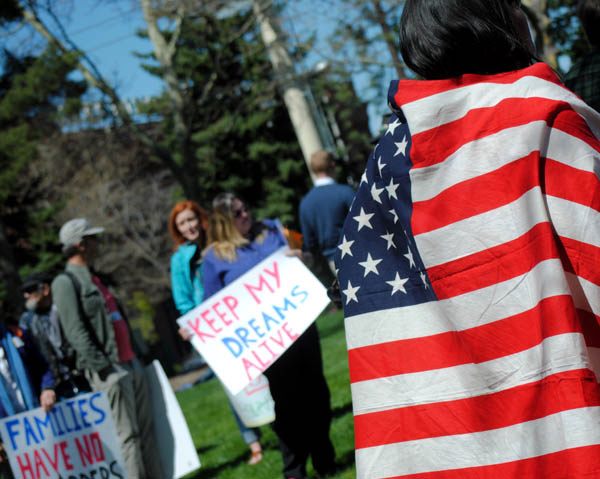 Share this story!
I have often wondered what drove my paternal great grandfather to emigrate from Russia to the United States. In the early 1900s, such a journey was no doubt fraught with danger. Perhaps he was escaping an even more sinister danger in his native land. Or perhaps it was the promise of America that lured him to these shores. Whatever the reason, his journey made possible the family I know and love. Without immigration, we would not be.

This is the story of so many of us that live in the U.S: parents, grandparents and family fleeing conflict and strife in far flung countries, hoping that America could provide something better for them and their children. We are a nation of immigrants, as the saying goes. Despite this obvious fact, we resist tooth and nail the implementation of anything approaching a humane immigration system. Recently, stories have shed light on the abuse of child immigrants at detention facilities, the deaths of immigrants trying to cross the border into the U.S. and the crossing of thousands of unaccompanied children from South American countries, many of whom will likely be deported. These grotesque stories are not a bug in our system, they are a feature. If we really value human life, we should rethink how we view our borders.

Open borders is not a phrase you will likely hear in either liberal or conservative circles. Traditional party politics have always stuck to looking at mundane fixes for our broken system: streamline the immigration process itself and secure the border. Currently, our immigration system puts priority on reuniting families, giving exile to communities and people in mortal danger and bringing in "high skilled workers," but the amount of visas in any one category is capped. Thus, thousands of families are never reunited, millions who live in mortal terror are stuck in a situation which could mean certain death and those who are unfortunate enough to be poor (or "unskilled") have little opportunity to enter legally, or at all. We have made it easier for corporations, a creation of human kind whose worth is wholly subjective, than for people to move across borders. The arbitrary nature of our immigration allotments, and the subjective skills we rank in order to determine who deserves to immigrate only underscore just how cruel and cold the system can be. It does not have to remain that way however, nor should it if we consider ourselves at all civilized.

If you are picturing open borders as a free for all, you are probably not alone; but you would be wrong. The concept of open borders does not require complete and total freedom of movement for anyone. We would not have to allow terrorists who wish us harm across the border with explosives in tow. Instead, it insists that we not restrict immigration simply because someone was born on the wrong side of an arbitrary line on a map. It insists that we allow people who live in oppressive societies the ability to exercise political freedom one of the few ways they may be able to: by choosing what kind of government they wish to live under through immigration. It insists that we not treat the poor, many of whom were made poor by actions (or inaction) of our country and our partners, as castaways or undesirables.

All of this may seem like a pipe dream, but several places on our great planet have open border policies in place right now: almost all of European Union nations share open borders as a result of the Schengen Agreement, India and Nepal share completely unrestricted open borders courtesy of theTreaty of Peace and Friendship, and though they are not land locked, New Zealand and Australia have a liberal open border policy in place. At one point in time, even our country had something resembling an open border policy (which was effectively ended by the passage of the racist Chinese Exclusion Act of 1882). It is high time we thought about the benefits of bringing such a policy back.