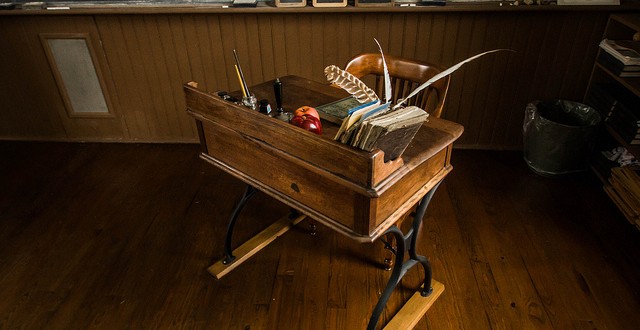 Teacher's desk in the one room Linn Schoolhouse in Marion, OH./Flickr photo by Todd Petrie

Educators should be as unbiased as possible, respect diversity

Initially when I was contemplating this topic, I was thinking it was “Religion and Education.” I had just about started to write when I revisited FAVS and found it is “Faith and Education” — a very different topic.

Faith is intangible, untouchable, and yet it defines who we are and how we perceive the world — how we live our lives, where we put our energy — our focus. Because of this, this topic feels quite “loaded” in that it is impossible to separate our faith from who we are and what we do.

If we are using faith and religion interchangeably, I believe that because religion has influenced much of our language, history, art, etc., it cannot be avoided. It is important to share how the religion impacted a particular topic in a way that gives a factual picture from the point of view of all who were involved (i.e. the Crusades from the Christian as well as the Islamic point of view). This can be very difficult for those who are very strong in their beliefs.

As an educator, I was very conscious of not bringing my religious beliefs into the classroom or into discussions with my staff. I do not believe in imposing my beliefs on another, rather it is important to honor and respect all beings. I did not consciously share my faith with others although certainly it influenced the decisions I made, the materials I chose, the language I used, and on and on.

I believe that the intent of education should include opportunities for students to grow in their understanding of the diversity of their community, nation, and the world both currently and historically. It is impossible for an individual to separate their faith from who they are. Rather, I would invite educators to set an intent to be as unbiased as possible and to share with their students (as appropriate) how their (the educator) views might be a bit biased.

Join SpokaneFAVS for a Coffee Talk forum on “Faith and Education” at 10 a.m. July 4 at Indaba Coffee/The Book Parlor, 1425 W. Broadway. Niemiec is a panelist.

Walking the spiritual path has been part of the Rev. Toni Niemiec’s life as long as she can remember. She said as a child she was not raised in a “traditional” religion.