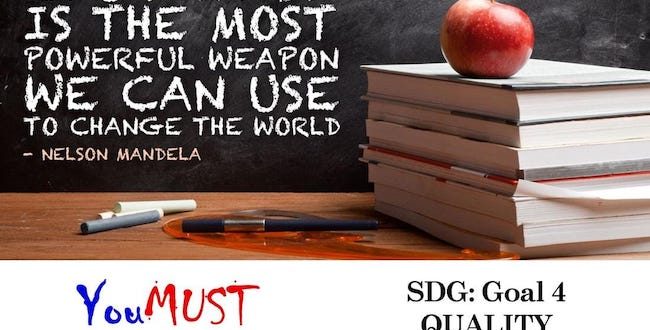 We all start from scratch. The unnumbered generations that preceded us mean nothing in terms of education. Our first breath starts us on a lifetime of discovery. Education begins with our first blink.

The days, months, and years following birth shape our lives. Between the first nurturing suckle to the last breath, our senses are bombarded with stimuli. We respond by coalescing information patterns in our minds and (mostly) making sense out of them. Then we act on our understanding. If we’ve misunderstood either the facts or the meanings of that information, we will err.

Substantial insights (as well as much drivel) have been published about the mysterious phenomenon we call “education.” Its spectrum ranges from random sensory input through formal readin’, ritin’, and rithmetic, and on into highly specialized learning, from astrophysics to zithers.

Definitions vary. Education includes “child rearing,” “training of animals,” and “despotism.” At its Latin root, “education” means “to lead forth.” One English translation from Latin observes, “the mid-wife brings forth, the nurse brings up, the tutor trains, and the master teaches.” Yet education transcends all of these; it involves lifetime development for each individual.

The 1948 United Nations Universal Declaration of Human Rights encapsulated this idea. Calling itself “a common standard of achievement for all peoples and nations,” the declaration states “every individual and every organ of society…shall strive by teaching and education to promote respect” for the rights and freedoms outlined in that declaration.

This implies that education is far more than “book learning”; it encompasses total development of the individual, beginning with the newborn’s first unseeing glances toward its mother. “Everyone has the right to education,” the UN declaration states.

Furthermore, “Education shall be free,” and “elementary education shall be compulsory.” Technical and professional education “shall be made generally available,” and “higher education shall be equally accessible to all on the basis of merit.” Seventy-three years after formulation of this ideal, I’m not aware of any place where it’s been realized.

These ideas and ideals are not new. The 19th century writings of Baha’u’llah contain a wealth of inspiration about the enlightening social imperatives of education. For example, Baha’u’llah reiterated the teachings of earlier manifestations of God in recognizing God as an unknowable Essence. This implies a single religion embracing a single humankind, breathtakingly diverse, but one in essence. These three onenesses – one God, one faith, one humankind – provide both spiritual and material underpinnings for creating an ever-advancing civilization. But as the UN declaration observes, it can’t be done without education.

In 1882, Baha’u’llah wrote a tablet answering inquiries from a follower. In it he described man as a “supreme talisman,” not your everyday word. One definition of talisman is “any object ascribed with religious or magical powers intended to protect, heal, or harm individuals.”

Baha’u’llah links this notion of special powers, capable of protecting, healing, or harming, with the importance of education. After calling man “the supreme Talisman,” he immediately warns: “Lack of a proper education hath, however, deprived him of that which he doth inherently possess.”

Man was “called into being” and “guided to recognize the Source of his education.” He is “a mine rich in gems of inestimable value.” Baha’u’llah then underscores the role of education in human development, both individual and social: “Education can, alone, cause [the mine] to reveal its treasures, and enable mankind to benefit therefrom.”

As early as 1875, Baha’u’llah’s son Abdu’l-Baha, — from age nine exiled and imprisoned, himself without formal education — explained to his native Persia the role of education in creating a better world. He was 31 when he wrote “The Secret of Divine Civilization” describing the “vital necessity to establish schools…even in the smallest country towns and villages, and to encourage the people…to have their children learn to read and write. If necessary, education should even be made compulsory.”

In 2015, 140 years later, the United Nations adopted the Sustainable Development Goals to “end poverty, protect the planet and ensure that all people enjoy peace and prosperity.” Goal 4 was, “Ensure inclusive and equitable quality education and promote lifelong learning opportunities for all.” Goal 5 is “Achieve gender equality and empower all women and girls.” These goals are inseparable; the first educator of a child is its mother.

Universal education works to eliminate all forms of prejudice, which arises mostly from ignorance. People able to reason can independently evaluate evidence of all sorts, including information about other people. Education is no guarantee, but it’s a major step toward abolishing prejudice of all kinds.

Our interconnected world binds us together. The sooner we recognize that, the sooner will our global civilization move toward a prosperous, permanent peace. It’s pr0mised in all the scriptures. Perhaps now is the time.

Previous Resurrection 2021
Next Ask A Muslim: Fighting the Urge to Drink

The Many Faces of God – THE WROS