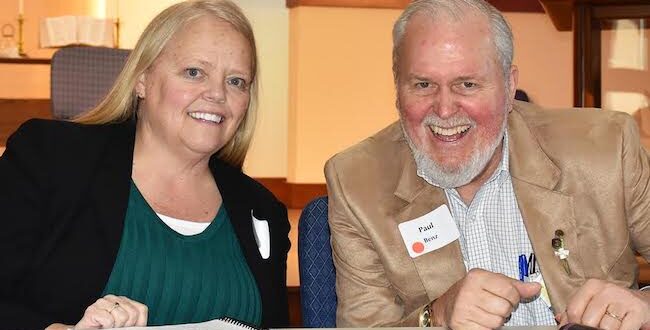 Donna Christensen from the Washington State Catholic Conference and Paul Benz, co-director of the Faith Action Network of Washington will be presenting an overview on issues coming before the 2020 state legislature/Contributed Photo

This article has been updated

The annual Eastern Washington Legislative Conference, co-sponsored by The Fig Tree, Faith Action Network and Catholic Charities of Eastern Washington, will be held on Saturday, Jan. 25 from 8:30 a.m. to 3:30 p.m. at Spokane Valley United Methodist, focusing on the theme of “Making IT Happen” to encourage people to call to action surrounding social justice issues and public policy.

Kaye Hult, administrative and volunteer coordinator at The Fig Tree, said the conference is a chance for people to come together to listen to presentations related to issues that will be coming in the Washington State legislature this Spring.

Malcolm Haworth, resource directory editor and ecumenical and interfaith community coordinator at The Fig Tree, said the conference focuses on bringing the faith and non-profit communities of Spokane and wider Inland Northwest together and provides a faith and values connection to social justice issues and public policy.

At the event people will learn about bills that are currently being considered in any legislative system, petitions, public policy or political activism, with the purpose to inform and inspire the people about issues of common concern in the ecumenical, interfaith and non-profit community, he added.

With “Making IT Happen,” the hope is that people will take away some concrete ideas of actions they can take when they leave the conference, Hult said.

The main focus of it, Haworth said, is to serve as an educational event for the faith community and nonprofits. Individuals are then encouraged to act or take the information to their respective communities.

Presentations and discussions at the conference, described by Hult, will revolve around tenants rights, homelessness, gun violence and legislative overview and briefings.  There will be six workshops as well about shareholder advocacy, climate change, homelessness communication, faithfully facing racism: confronting white supremacy, census and justice work, and refugees and the numbers caps.

“Largely it is time for faith communities and public at large to come together to learn, share and network,” Haworth said. “Along with the main program, workshops and potential politicians visiting, we offer breaks for people to make connections, to check information tables and break bread for brunch and lunch. Those times of social interaction are key to creating community.”

Speakers and presenters will include:

“As someone who grew up in Spokane attending this community event, it was a pivotal event in my formative years as an activist and person of faith,” Haworth said. “It influenced my later activism in college networking student clubs on social justice, environment, faith and diversity.”

While the focus of the conference is on social justice and services, Haworth said that they are non-partisan and try to find common ground.  People of no faith tradition from the community and nonprofits also attend the event as well, he added, because the conference’s intention and roots are fundamentally in discernment of what is just or justice for the common good.

“We don’t come from a perspective of imposing or indoctrinating how one thinks and acts in certain ways,” he said. “We offer information and options. We respect where there are differences and disagreements in the faith community.”

The conference has been held for decades that originated from area bishops and laity who found common ground on social needs social justice callings from their faith traditions, Haworth said.  He added that Spokane has a long tradition of mainline and Catholic churches being politically conscious to help not only their local missions, but to broaden the scope to have a positive impact on public policy.

“Where there are those differences, we respect them, invite the challenges, lift them up for further reflection and are civil in contrast to the political scene today that divides,” he said. “We can best ‘make it happen’ where we can achieve common ground with our community.”

The conference is open to the public and attendees are encouraged to donate $20 per person or $15 for a group of five or more.

Previous Ask An Atheist: Atheist or Secular?
Next Ask A Catholic: Holy Water