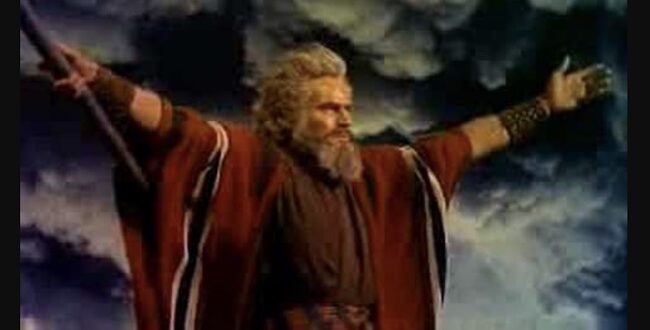 Charleton Heston as Moses in "The 10 Commandments"

As a child, I knew more about Easter than I knew about Passover.

That was the way things were when religious instruction was allowed in public schools.

I had started Sunday school at synagogue when I was 6 or 7 years old. But it was more a babysitting service than anything else, with very limited instruction delivered in the form of games and children’s stories. The games were fun. The stories interesting. But it is hard to hold a youngster’s attention at that age.

By contrast, I learned about Easter in detail in my first- and second-grade classes.

Teachers told us the Easter story. They explained Ash Wednesday and Palm Sunday and Good Friday. And I vaguely remember even seeing a movie in class which showed a European Jesus rising from his crypt bathed in a golden glow.

The Friday before Easter, the classes would hold egg hunts to which I was obligated to contribute colored eggs.

I enjoyed it all, of course. I was just a kid.

Except at home, the season was not about Easter but about Passover. We were not Orthodox Jews, so our Passover observances were sporadic. There was an occasional seder dinner, usually with my cousins’ family. The question was asked, “why is this night different from all others?”

And my oldest cousin would explain.

But in many ways the ritual overshadowed the story.

As with Christmas, Jewish parents faced a dilemma. The secular elements of the Easter holiday were impossible to avoid. How do you tell a 7-year-old that he cannot have candy when the neighbor children are showing off their baskets? How can you say no to egg hunts?

So, in my family, there were colored eggs and candy baskets the night before Easter morning. My father called them Passover treats and then stopped worrying about it.

It was my paternal grandmother who helped me understand Passover.

My Grandma Weiner was not a warm woman. She had escaped European pogroms and fled to the United States in 1914, bringing with her two young daughters, toddlers. She had to be tough to cross the Atlantic alone, make it through Ellis Island, and then take a train to California. She did this without speaking English and with no money. That is a toughness we cannot understand.

By the time I came into her life, she was self-absorbed and aloof.

We would visit her after Sunday school, eating tuna sandwiches, and watching TV, while she visited with my parents.

Except for one occasion, I do not remember doing anything with her. But that one occasion was memorable.

I don’t know how it came about. But one afternoon she took me to the movies. I was probably seven.

And we went to see Cecil B. DeMille’s “The Ten Commandments” with Charlton Heston as Moses.

It’s a long movie, too long for most youngsters. But I was enthralled and sat through it. And it changed my entire perspective though I would not be able to articulate that for years.

This was the Passover story told in Vista Vision with chariot armies and plagues and that thrilling parting of the Red Sea which still gives me goose bumps. A kid could relate to an action movie, with Egyptians as the bad guys and Jews as the heroes.

And the movie finally explained Passover to me in a way I could understand, dramatic, visceral. Our people, my people, were spared by God as he descended on Egypt’s first born to force the pharaoh’s hand. That is the story to be told at seder. And it is a thrilling story about freedom from slavery and the subsequent delivery of laws that proscribe human behavior to this day.

As an adult I know history is much more nuanced, that there is more myth to the Moses story than truth. That is how it is with Bible stories.

I have written before that in my early grade school years my teachers would ask me to explain Hannukah to the class. And then, on the playground I would have to endure teasing and bullying because I was different.

That was not the case at Easter. My teachers never asked me to explain Passover because I think it seemed too complicated to them and there was nothing like a menorah to serve as a visual. As to sharing matzah with the class – a non-starter.

The Jews-as-Christ-killer anti-Semitism did not impress itself on my life until much later, which was good because I knew then how to deflect and defend against that.

I know in some Christian circles there is a longing for the good old days when there was religious instruction in public schools, and school prayer, and holiday observances. I can understand that. Mostly those desires are a sincere effort to reinforce deeply held beliefs in their children.

But I think it is too often hard for those parents to understand how religious instruction in schools can harm children of different faiths, can deny, even denigrate their own heritage.

In the end, I can thank my grandmother, Cecil B. DeMille, and Charlton Heston for helping me find mine.

To my Christian friends, happy Easter.