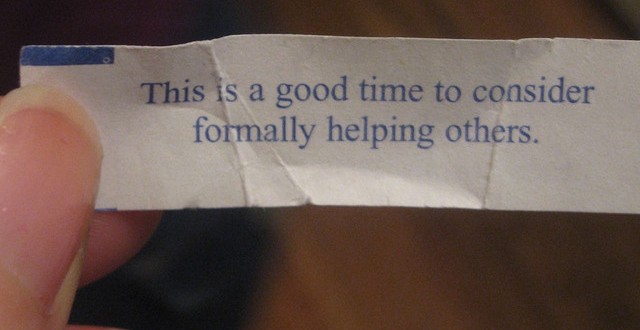 Easily helping those around us

By Kyle Franklin
The other night, I read an article about the Nigerian girls who were abducted from their school by an extremist Ismalic group. My initial thoughts were as follows:

“So many problems in the world… So many people suffering… It is hard to choose a single cause to stand behind, but if we did, would those behind that single unit be able to stand united and act toward significant change? I don’t have the answer — but I can raise awareness of the question…”

The simple truth is that I do not have an answer. We, as a society, recognize the wrongs that were (and continue to be) committed. But we simply do not have a proper response.

While I wish that I had a proper response to the blatant wrongdoings of extremists, I do not. It is my sincere hope that people are able to unite to defend the rights of those without a voice and without given rights of the marginalized.

But I recognize the extreme impact that simple acts can and do have on individuals. Let me explain.

One of my close friends works in retail in Olympia, Wash. He is in the lower margins of management and often finds himself doing the lowliest of tasks. Recently, he told me about two interactions he had in which he made an extreme impact on the lives of those with whom he encountered.

The first of these encounters was with one of his coworkers. While my friend was in charge of the store, he came across an employee who was hiding and crying. She confided in him that her father was in the hospital, seeking treatment for his alcoholism. The result was that her paycheck would be needed for family expenses and, as a result, she could not afford the medication she needed to prevent debilitating ailments that would not allow her to work. He responded by paying for her medication, knowing that he would not receive a tax break or any recognition for his act.

On a different occasion in the past several weeks, this same friend was cashiering and had a customer whose credit card was declined. When he informed her of the incident, she burst into tears and told him that her brother died suddenly and she inherited his children unexpectedly. She was at his store to purchase school supplies for them, but her own resources were scarce. My friend, the humanitarian that he is, pulled out his own credit card and paid for the school supplies, knowing that he would unlikely be reimbursed for his expenses and that there would be no tax break for him.

This friend of mine does not proclaim himself as Christian or even religious for fear that he will be associated with Mark Driscoll or Fred Phelps. But, from my standpoint, he is a better example of the life of Jesus than many who do proclaim themselves as Christian. With no expectation, he gives of himself and does what he can to see that others have sufficient provisions.

Recognizing these two different experiences, I have two questions. The first was stated earlier in this article. “It is hard to choose a single cause to stand behind, but if we did, would those behind that single unit be able to stand united and act toward significant change?” The second, though, is simple. If we were not so concerned with taxes and tax returns, what would we do that would significantly impact the lives of others? I argue that we could easily provide for those around us — school supplies, clothing, shelter, and even things as significant and simple as food.

What can you do? And, more significantly, what WILL you do?