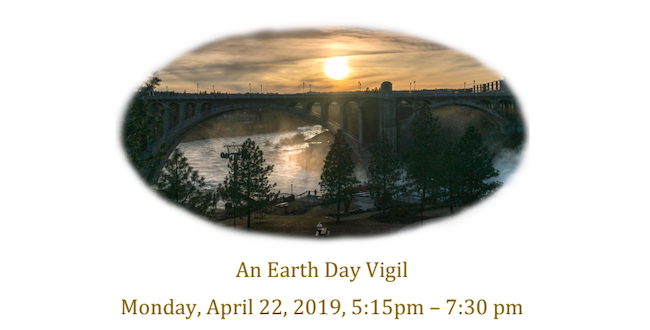 Earth Day Vigil to Address Effects of Pollution, Including Bunker Hill Mine

This coming Earth Day, (Monday, April 22), The Faith Leaders and Leaders of Conscience will hold a vigil at 5:15 p.m. at the Tribal Meeting Place next to City Hall. According to a press release, the vigil will be “for the healing of the Earth.”

“It is an opportunity to raise awareness,” Barbara Miller, director of the Silver Valley Community Resource Center said. “We are the messengers. We want to make people aware and gain their support.”

The vigil is in part a protest of the Bunker Hill Mine in Kellogg, which is located on the nation’s largest Superfund site. The Bunker Hill Mine had been operating since before 1885, spreading lead into the soil of the surrounding area. But clean up efforts did not get started until 100 years later.

The mining in the area caused serious contamination of the surrounding areas and spiked the amount of blood lead levels in locals to over five times the U.S. average levels, according to the Idaho Department of Environmental Quality. As of 2018 the blood lead levels continue to hover at about 5 micrograms per deciliter, which is below the CDC health standard. This amount of lead in the bloodstream is not actively dangerous, however, the CDC also stated that it does not consider any amount of lead in the bloodstream to be safe. Instead, any trace should be monitored by a doctor.

The vigil will also focus on the the environmental impacts of the Midnight Mine and Newport Smelter which have affected the Spokane Indian Reservation. The vigil’s opening statement will be given by Carol Evans, Chairwoman of the Spokane Tribe of Indians.

Rev. Gen Heywood of Faith Leaders and Leaders of Conscience believes this is an issue that extends past environmentalism and into caring for our neighbors and fellow Washington citizens.

“It is a moral issue that affects all of us, even if it didn’t directly affect us, we should be deeply concerned because our neighbors are sick because of the damage that has been done,” Heywood said. “A mine isn’t built in a rich neighborhood.”

The vigil will also feature speakers that have been personally affected by the ecological damage of the mine.

“You would not believe the integrity, once they know what’s going on, they speak out, but it’s been demonized and it causes oppression and suppression,” Miller said. “Building awareness so all people benefit, that’s what the Earth Day Vigil is about.”

Miller also helps run the Children Run Better Unleaded Project which helps to increase awareness of the danger and prevalence of lead poisoning of children in the areas affected by the superfund sites.

“We are creating solutions to help everybody, most of all the children, the workers,” Miller said.

The vigil is also sponsored by several local nonprofits and charities including, the Sisters of St. Francis of Philadelphia, 350 Spokane, Spokane River Keepers, and the Coeur d’Alene Tribe.

The Earth Day Vigil is the first in a series of vigils that will happen throughout the year. The next vigil will be held on Oct. 6, at the Cataldo Mission in Idaho.

You can help support more news coverage like this by making a tax deductible donation below.

Previous 2019 Spokane Area Easter Listings
Next Why Easter is called Easter, and other little-known facts about the holiday