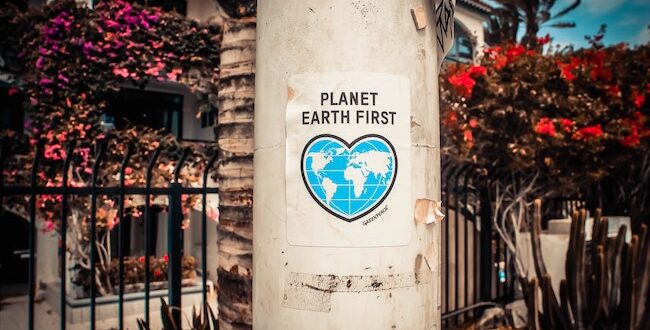 Photo by Photo Boards on Unsplash

This Friday’s “A Vigil for the Healing of the Earth” isn’t just an Earth Day observance to draw attention to the ecological devastation inflicted on our planet by pollution, overpopulation and other manmade elements.

The event, which takes place April 22 from 4:30—5:30 p.m. at St. John’s Cathedral’s South Patio, is also meant to initiate action among those who attend.

“It is about giving people choices about healing the Earth,” Faith Leaders and Leaders of Conscience of Eastern Washington and North Idaho convener Gen Heywood said. “Giving people ideas for how they can do something.”

The vigil — held twice a year on Earth Day and the first Sunday in October — provides an opportunity to listen to “those affected by ecological devastation” while also making connections with those who are in organizations actively involved in “healing the Earth” through remediation and outreach.

First held on April 22, 2019, the vigil is one of several initiatives undertaken by Faith Leaders and Leaders of Conscience, a ministry Veradale United Church of Christ started in 2018 in support of the Poor People’s Campaign: A National Call for Moral Revival. The campaign focuses on ways to overcome “racism, poverty, militarism and ecological devastation.”

In gathering together, Faith Leaders and Leaders of Conscience — a group Heywood said has no hierarchy or real organization — committed to three tenets: “1. Showing up, 2. Surrendering our ego, and 3. Risking Failure.” Heywood said the organizations hopes their efforts facilitate those of other groups who are more involved and possess capabilities better suited to dealing with these issues.

While issues such as ecological devastation affect everyone, Heywood said they most often fall particularly hard on those living in poverty. One of the most readily visible examples of this is the Bunker Hill Silver Mine Superfund Site.

According to a 2018 PowerPoint presentation “Getting the Lead Out” made by the Panhandle Health District and available on the Spokane Riverkeeper website, Bunker Hill was once the largest lead and zinc mine in the U.S., producing one-third of the nation’s lead and one-quarter of its zinc.

It was Idaho’s largest employer with a weekly payroll of over $1 million, but it was also a major polluter in the region. Up until 1968, 2,200 tons of mine waste was discharged into the South Fork of the Coeur d’Alene River daily, eventually leading to an estimated 100 million tons and more of mine waste, including 2.4 billion pounds of lead, being dumped into local rivers and streams and leading to dispersal over thousands of acres.

While the actual Superfund site itself is located in and around the Idaho Panhandle town of Smelterville, the contamination and remediation project boundary encompasses over 1,500 square miles, stretching from the confluence of the Spokane and Columbia rivers in Washington state on the west to the eastern slopes of the Rocky Mountains of Montana in the east.

It’s the second largest such region in the United States.

The impacts of this pollution remain today and range from contaminated fish in the Spokane River — where low-income individuals often fish for food — to highly toxicity at recreation sites, such as the old boat landing at the Cataldo Mission State Park, where a sign warns that young children and pregnant women are “at greatest risk from exposure” to the elements contained in the soil.

“It’s beautiful to look at,” Heywood said of the landing area. “You think, ‘it’s lovely, how could anything be wrong with it.’ And then you see those signs.”

Bunker Hill is one of six Superfund sites in Idaho, while Washington is home to 46 such locations. These include the Midnight Mine, an open-pit inactive uranium mine located on the Spokane Tribe of Indians Reservation about eight miles from Wellpinit.

Spokane County is home to eight sites, including landfills in Colbert, Mead and Mica, a tank farm on North Market Street in Spokane and sites near Fairchild Air Force Base. The latter are four sites included on list in 1988, but in 2017, firefighting foam PFOA and PFOS were found in drinking water in Airway Heights that originated from base activities, causing the city to seek a new water supply from Spokane and leading to water distribution to residents in the interim, along with potential health problems from exposure.

The Earth Day vigil at St. John’s Cathedral will draw attention to these issues. Heywood said the vigil begins with an opening statement from Faith Leaders and Leaders of Conscience, followed by remarks from Carol Evans, Chairwoman of the Spokane Tribe of Indians Tribal Council.

Evans will be followed by two speakers who will talk about ecological devastation, what it is and what it means. After that, Heywood said St. John’s Carillonneur Byrl Cinnamon will play a musical piece on the cathedral’s bells, which will be followed by short statements from representatives of local organizations partnering with the Faith Leaders and Leaders of Conscience about their work.

The vigil will close with blessings from local faith leaders and thoughts about the environment from non-religious members.

Heywood said attendance at past vigils — which are held at St. John’s in April and at Cataldo Mission in Idaho in October — has been good, even virtual events held during the pandemic, and hopes this will continue.

“A Vigil for the Healing of the Earth” takes place Friday, April 22, beginning at 4:30 p.m. at St. John’s Cathedral, 127 E. 12th Ave. The vigil will be held on the South Patio, inside if weather is not permitting.