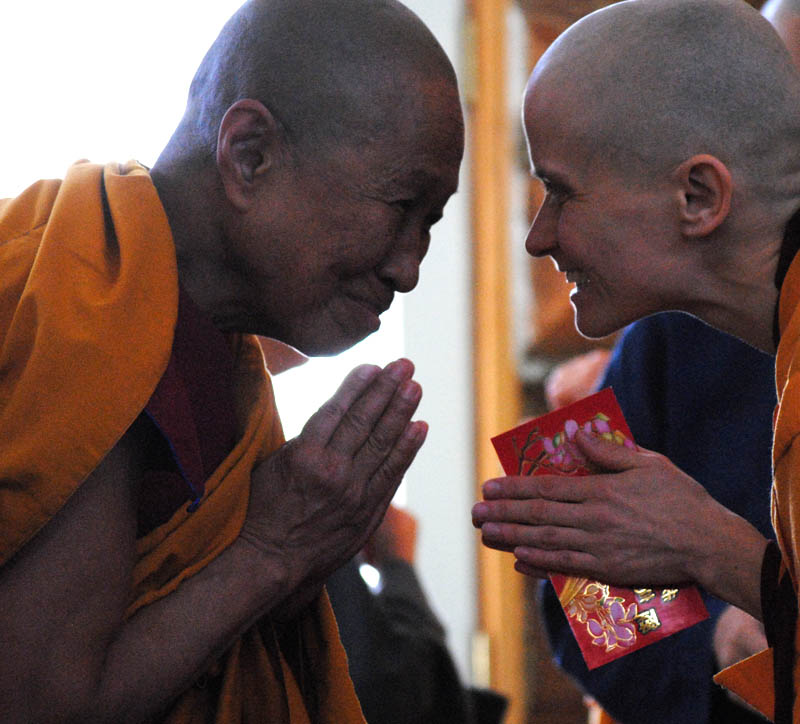 NEWPORT — Daniela Mieritz touched her palms together, closed her eyes and let shavings of hair fall onto the dark blue towel draped around her neck.

About 30 people sat facing her, watching the sacred ceremony. Mieritz never opened her eyes to look at them, though a smile occasionally crept across her face as her teacher, Venerable Thubten Chodron, delicately took a razor to Mieritz’s scalp.

Mieritz was to become Venerable Thubten Jampa that day. She would shave her head, trade in her blue anagarika clothes for maroon robes and take precepts vowing to live her life as a monastic, putting her own desires aside to serve others through the sangha at Sravasti Abbey.

“The sangha is growing and growing and that enables us to better be of service to everybody else who wants to hear teachings and learn meditations and come into contact with these really precious instructions from the Buddha,” Chodron said at the Jan. 19 ceremony.

Sravasti Abbey was started 10 years ago by Chodron, who at the time was the only monastic living there. Today there are six bikshunis (fully ordained nuns), three novice nuns and three anagarikas serving there. Mieritz took her novice nun vows and if she chooses to pursue full ordination, then in two years will travel to Taiwan for that ceremony. Up until now she served as an angarika, which is the midway status between a nun and layperson.

Ruby Pan, 29, took angarika vows during the ordination ceremony and will spend one year preparing for novice nun ordination.

Mieritz, 35, said she first felt the pull toward monastic life over a decade ago when she was living in Germany.

“I was working for a Tibetan organization…fighting for human rights and in doing this my interest in Buddhism got stronger and stronger,” she said.

She had also studied politics and sociology and had been pondering ways she could use those avenues to help the country’s social development. Tibetan Buddhism, she learned, didn’t fit like she hoped, so she pursued monastic life in Japan before discovering Sravasti Abbey.

“I think the call comes from my own suffering,” she said. “I had some difficulties in my childhood. I didn’t grow up the whole time with my parents. I got support from government institutions.”

Those who were raised by their parents seemed to have inner peace, Mieritz said. She thought the restlessness she felt was because of how she was raised. Until, she said, she began reading books by the Dalai Lama.

“He wrote about loving-kindness and compassion. It was the first time I heard these words,” she said.

The monastery she was exploring in Japan was in the Zen tradition. Mieritz said the practice didn’t seem to help her with afflictions like anger and attachment, so began looking for a teacher in the Tibetan tradition, which is how she found Chodron.

She’s been living at Sravasti Abbey since 2011, working with and learning from Chodron and the other nuns.

During her novice nun ordination, after the head shaving ritual, she walked up a snowy hill to the meditation hall where she made a commitment to monastic life, with bhikshunis from Sravasti and from Kirkland Evergreen Temple near Seattle as witnesses.

As soon as she took the precepts, she said, she could feel she had made the right decision.

“It became bigger than I am. I was connected with them (the bikshunnis) and with teachers I had never met,” Mieritz said. “I thought ‘Yes, I will do this.’ I will work for the benefit of others.”

You can read more about the full ordination process in this article.