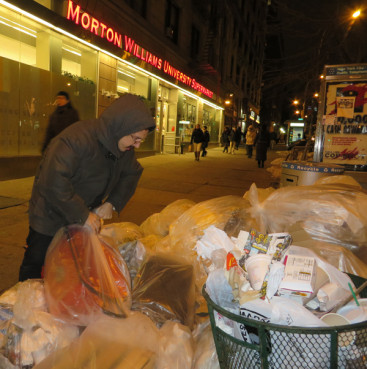 Dumpster diving as an act of faith

Gio Andollo looks for food in the trash outside Morton WIlliams Supermarket on 115th Street in Manhattan, New York. Andollo, who is driven by his faith, goes Dumpster diving about once a week. RNS photo by Sarah Pulliam Bailey

NEW YORK (RNS) As a musician barely scraping by, Gio Andollo looks to trash bins as a way of life.

On a recent outing, he carefully untied bags outside a supermarket next to Columbia University. He likes this market because it uses clear plastic bags, making it easier to spot bread, fruits, vegetables and other treasures.

“We can use our instincts about these things and usually they’re OK,” he said. “You can always clean it well and cook it. You can make sure you’ll at least survive.”

Digging through the trash, he found apples that were bruised and sandwiches partially eaten. But they worked for him. He has never been sick from food retrieved from the trash, he said. A vegetarian, he passed up half of a chicken he came across.

Andollo’s forays into the trash are more than just a budget-stretching strategy. Like plenty of other so-called Dumpster divers, he’s on a quest to preserve the planet.

He says the freeganism movement, or the practice of reclaiming and eating food that has been discarded, is populated mostly by nonreligious people. But for Andollo, Dumpster diving is an act of faith, one that is motivated by a biblical mandate to care for the Earth.

As a 29-year-old Christian, Andollo seeks to eliminate waste that leads to landfills and pollution.

“The reason freeganism exists as opposed to homelessness is that there’s an ethic behind it,” he said. “It’s rescuing food from the waste stream, and it’s subverting the economic system that sees food only as product and not as food to feed people.”

Dumpster diving is now a common practice among freegans and homeless people. But Andollo uses another name for the practice: food rescuing. Plus, in New York, divers aren’t technically diving into any Dumpsters, the boxy metal trash containers.

Gio Andollo looks for fruit among the trash bags outside Morton WIlliams Supermarket in New York. Photo by Esha Mahajan

Most of New York City’s trash is found in bags on the curbside, so trash is up for grabs until it’s hauled away. Breaking into locked Dumpsters is considered trespassing.

Foraging in trash bags has taken off in some New York circles with organizations such as Food not Bombs, a group of volunteers that retrieves vegan or vegetarian food to share with the public.

One group forages for food each Wednesday night and offers it to people in Brooklyn’s Bushwick Park. The Food not Bombs website lists 500 chapters. “With over a billion people going hungry each day how can we spend another dollar on war?” the group’s mission statement asks.

Dumpster divers are of a particular demographic, said Sharon Cornelissen, a doctoral student at Princeton who researched divers for her master’s in sociology. She said the movement generally attracts educated white people in their 20s and 30s; typically, they are people who do it by choice rather than need.

Sojourners, a Christian magazine dedicated to social justice, featured Dumpster diving on its cover in 2006, motivating Micah Holden to begin trying it a year later. Now he lives with his wife and daughter in Wheaton, Ill., where they occasionally blog about being a Dumpster diving family in suburbia. Holden, who is a nurse, said his motivations to go once or twice a week are mixed.

“I have a strong belief in being resourceful and not be wasteful,” he said. “Part of that is being a good steward and being a Christian. But there’s also a selfish motivation. I can get these things for free for myself.”

He and his wife shop at the grocery and online, like any other consumer, but Dumpster diving is an added hobby.

“It’s not the norm for your average evangelical suburbanite,” he said. ”Some people wouldn’t want to do it because there’s a stigma with digging through the trash. For some people, it’s too much work or too much time. It’s for people who don’t care what other people think.”

Andollo found freeganism through a Christian friend involved in Food not Bombs when he lived in Orlando, Fla. He grew up in Miami in a middle-class Christian family that avoided waste.

As someone who is religious, he knows he’s in the minority among his “food rescuing” friends, though he met several other freegans at a gathering of “Jesus Radicals” in Minneapolis.

“The leaders at my church either don’t care (like, no big deal), or they’re in support,” said Andollo, who attends Trinity Grace, a fast-growing evangelical church in New York City. “It’s like, ‘Gio has a perspective or lifestyle we can learn from.’”

His concern stems not only from his faith but a general concern for the Earth and for other people.

“There’s an environmental concern, but there’s also a concern for the dignity and value of humans and human labor,” he said. “At some point in my life, I couldn’t ignore the ‘Made in China’ tag anymore.”

As he looked down at his phone, Andollo said he knows he lives with some inconsistencies.

“I own an iPhone, and I know that makes me a terrible person in a way,” he said. “I know how people in Apple factories are treated. That’s one compromise I’ve made in my life.”

Andollo would like to form a formal group of Dumpster divers, but he’s had trouble recruiting others. He listed a Wednesday Dumpster dive on the online site Meetup recently and waited for others to arrive. A year ago, when he first started listing the Meetups, a number of people would show up, he said. Over time, however, they dwindled, especially in the cold weather. Mostly he goes alone.

On a day when the mercury hovered at 15 degrees F, he donned an oversize gray sweater on top of his plaid shirt,  pulled his dreadlocks into a ponytail and prepared to go foraging accompanied by a reporter. He refuses to buy clothes, receiving hand-me-downs from people. He said someone forced him to take a down coat so he would be warm while Dumpster diving.

“I’m enamored by the idea of living in poverty voluntarily,” he said. “Jesus taught about that and directed us toward something like that.”

The post Dumpster diving as an act of faith appeared first on Religion News Service.