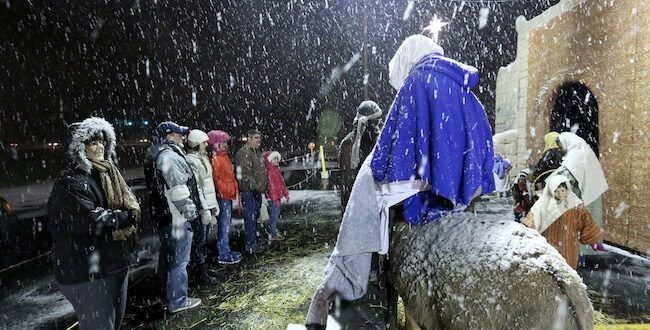 Spectators, left, watch as Mary and Joseph appeal to the Bethlehem innkeeper during the 2013 Lafayette Living Nativity, hosted by Faith Church of Lafayette, Indiana. The show is rarely canceled due to weather. Photo courtesy of Faith Ministries

At the Nativity display outside Faith Church of Lafayette, Indiana, the baby will be laid in a manger this year, surrounded by friendly beasts — except for the donkeys. They bite. In the past, the camels have been known to kick.

The church’s Lafayette Living Nativity, which Faith has hosted since 1991, may be one of the few Christmas traditions that go off in usual fashion in a pandemic year.

“We’ve been practicing for this moment for the last 30 years,” said the Rev. Steve Viars, senior pastor of Faith, who estimates that a quarter of a million visitors have attended the event in that time.

Live Nativities, in which visitors drive — and sometimes, especially in warmer climes, walk — through a number of scenes retelling the biblical story of Jesus’ birth, have been popular around the U.S. for years. Actors from churches’ congregations and, often, live animals are accompanied by narration of the story on a provided CD, accessed on smartphones via QR code or broadcast on a low-frequency transmitter. 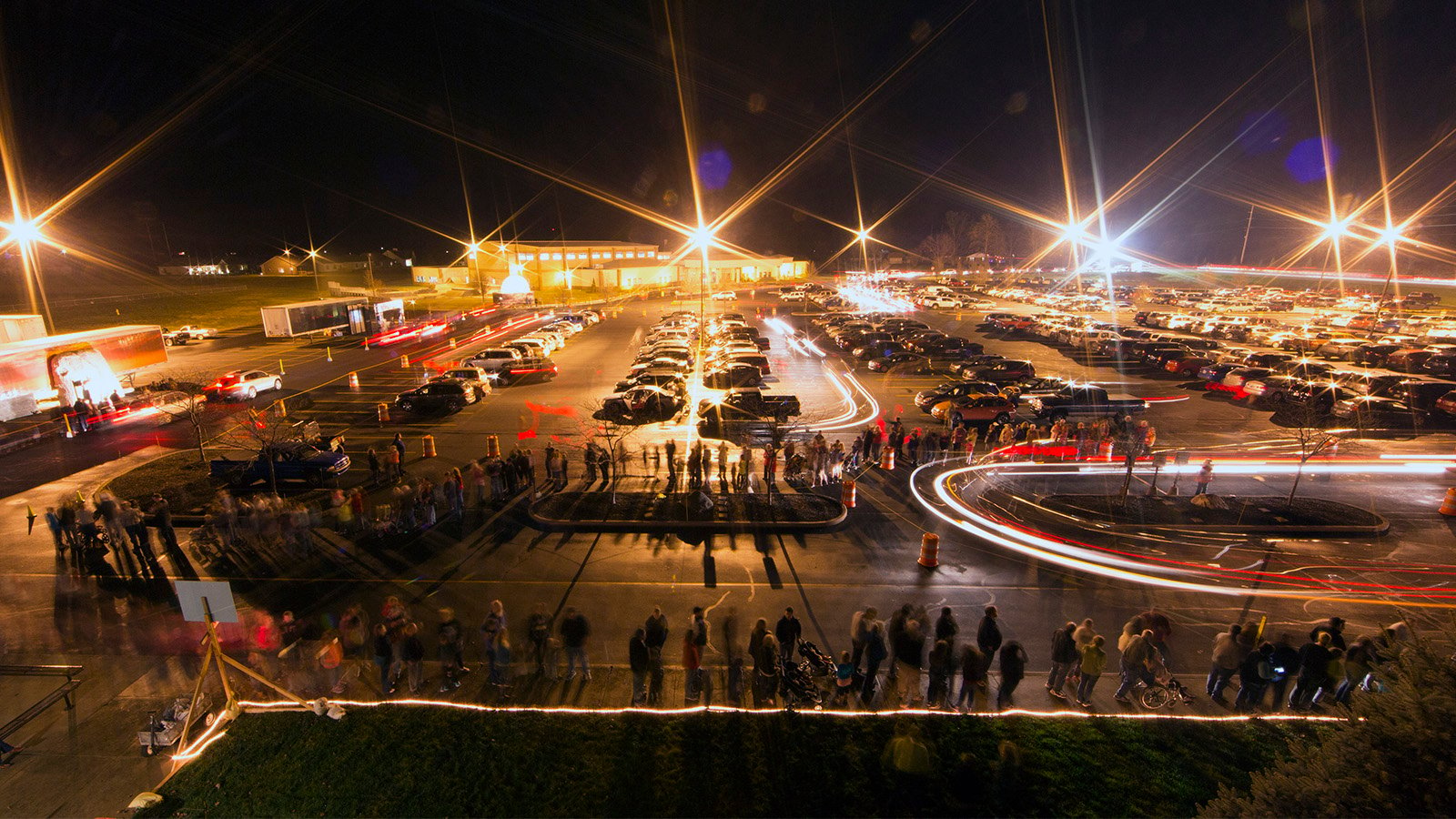 Guests line up to see the 2015 Lafayette Living Nativity, which is hosted by Faith Church of Lafayette, Indiana. Photo courtesy of Faith Ministries

Other churches offer a somewhat less “live” version that visitors can drive through, illustrating the story on painted backdrops.

All have found their moment in a year when mask wearing, social distancing and avoiding indoor gatherings have become the norm.

The Message of Christmas

“People still need the message of Christmas, the true meaning, the hope and the love. And so how can we provide that for them in a safe way?” said the Rev. Jonathan Andersen, pastor of Harvest Point United Methodist Church in Locust Grove, Georgia, which is adapting its annual live Nativity, Return to Bethlehem, to share that story as safely as possible.

The church is shrinking the number of scenes and the length of the walking tour, in which guides lead small groups past a petting zoo and the city of Bethlehem, a semipermanent structure on the church’s campus. The number of masked guests in each group will be limited and the total event will be held on two days, Dec. 12 and 13, not three. Prayer will move outside afterward, around campfires “in a distanced way,” instead of ending inside the church.

This year, Andersen said, “The gift of it is everything’s different and people are open to change.”

The church also will give away a woodcut Christmas ornament instead of the usual hot chocolate. Church staff thought about engraving it with the year, but, after some thought about the past 12 months, Andersen said, laughing, “I think we’re going to leave 2020 off the ornament.” 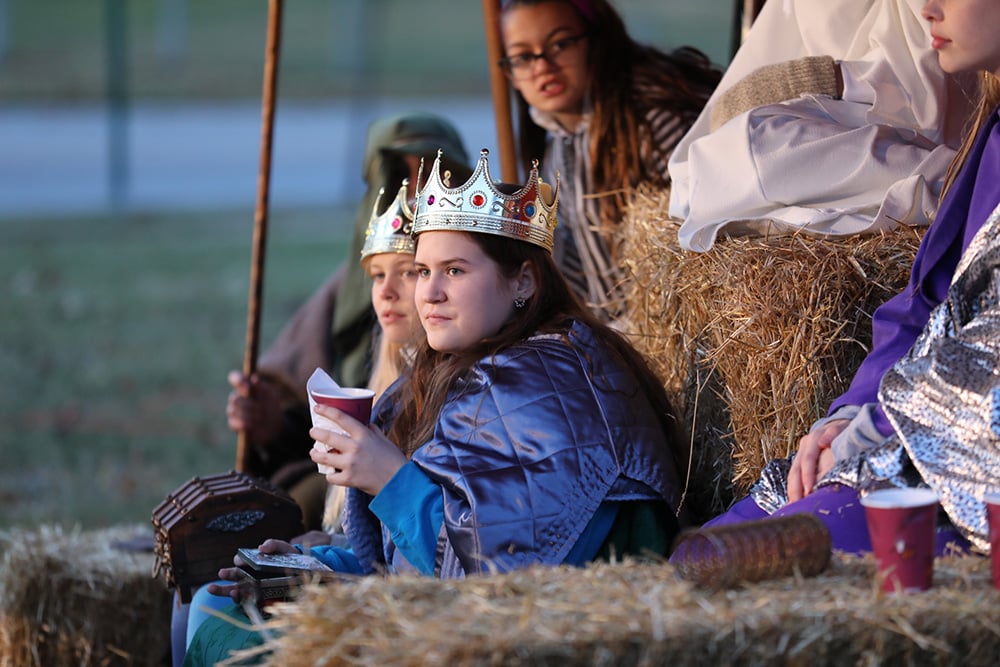 Advent Lutheran Church members participate in a live Nativity in December 2019 at the church in Columbus, Ohio. Photo by the Rev. Aaron Layne

The roadside live Nativity at Advent Lutheran Church, a congregation affiliated with the Evangelical Lutheran Church in America in Columbus, Ohio, is in its 50th year. At a busy, three-way intersection fronted by City Hall, the church and a golf course — the corner of “government, God and golf” — the event normally features coloring stations, hot chocolate and performances by the Singing Buckeyes, a men’s a capella group, according to the Rev. Aaron Layne.

The surrounding county has been hard hit by the coronavirus, and Columbus is under a stay-at-home advisory. But, the pastor said, that doesn’t mean Christmas is canceled.

Advent Lutheran has pushed back its event to Dec. 23, after the order lifts, and it has expanded its single manger scene, starring a donkey named Shrek, to six drive-thru scenes from the Christmas story on its property.

The church has tried to be thoughtful about creating scenes with one safely distanced actor, like Mary delivering the Magnificat, as well as scenes that can be performed by a single household: a family of six will hold down the scene in which a multitude of the heavenly host appears to shepherds.

Beauty in the Chaos

“Honestly, there’s disappointment and beauty in it all at the same time,” Layne said. Guests look at animals in the the Advent Lutheran Church live Nativity, in December 2019, at the church in Columbus, Ohio. Photo by the Rev. Aaron Layne

“I think it serves as a reminder that nothing — not sin, not COVID-19, not years like 2020 — can stop God’s love from coming and being with us,” he said. “Christmas is God’s love and salvation and word made flesh, and, you know, that doesn’t stop. In fact, I think it’s more important to do that now.”

In neighboring Indiana, Faith has cut some scenes from its Lafayette Living Nativity to accommodate more cars since it’s done away with its usual walk-through option. Over the years, it has expanded to recount not only the birth of Jesus, but the Garden of Eden story and Jesus’ death, resurrection and second coming. Hundreds of people, as well as camels, donkeys and sheep, now make up the cast.

“It’s just been a delightful way for us to proclaim the gospel at Christmastime,” Viars said.

And, in true 2020 fashion, Mary, Joseph and the rest will be wearing face masks. “The nice thing about doing it in Lafayette in the wintertime is you need a mask, you need a scarf, so you’re bundled up anyway,” Viars said.

The biting donkeys may get masks, too.

“It might be comeuppance time for the donkeys in 2020,” he said. 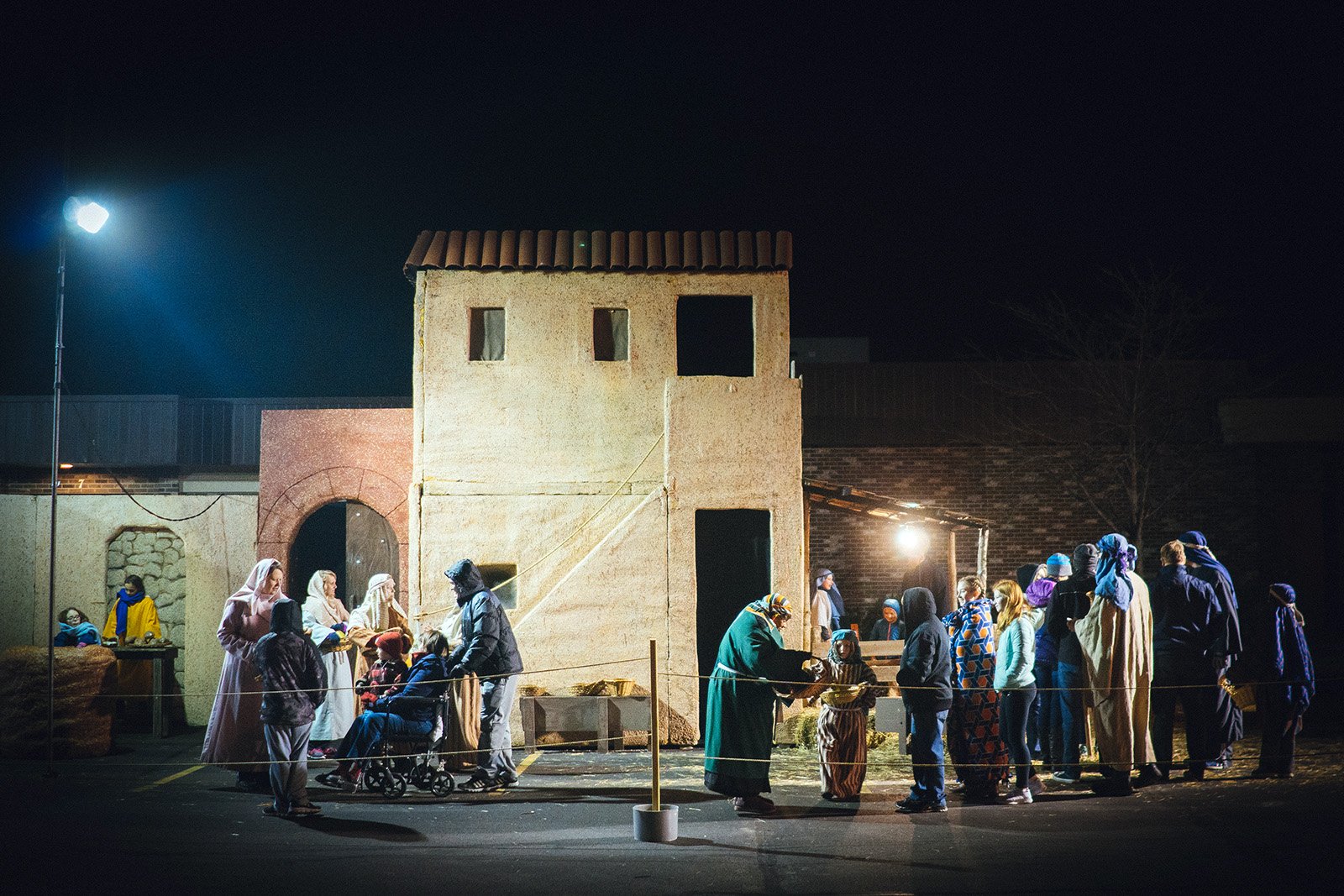 Walk-through guests interact with the cast at the Bethlehem market during the 2015 Lafayette Living Nativity, hosted by Faith Church of Lafayette, Indiana. Photo courtesy of Faith Ministries

Previous Female Religious Leadership Needs to Increase—But Why Is It So Hard To Get There?
Next Looking Beyond This Infamous Date