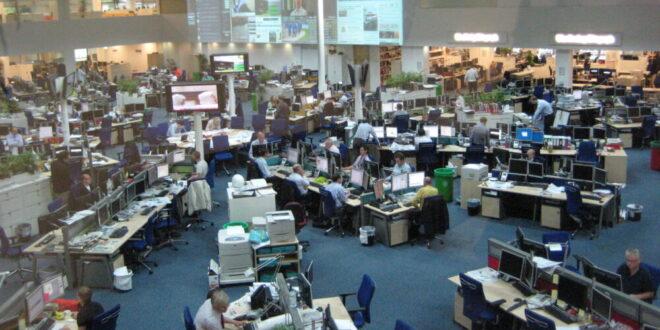 In my dreams I am walking through a newspaper newsroom. Sometimes it seems a familiar place, a shadow of somewhere I once worked.

Sometimes it is unfamiliar in the specifics, but so familiar in every other way.

They say we dream more vividly as we grow older. That is certainly true for me. And I remember my dreams now in ways I never did when younger.

And because I spent most of my life in newsrooms, that is where dreams take me.

Soon enough, the newsrooms I remember will live only in dreams. And an institution so important to American democracy will be all but gone. Not a dream, but a nightmare.

The announcement caught me by surprise, which is surprising given what is happening in the newspaper industry. The Medford Mail Tribune closed last week, shuttered. Nothing left, not even a digital site.

The newspaper was one of Oregon’s oldest and the first in the state to win a Pulitzer Prize, in 1934, for fighting corruption in its home county. I never worked at the Mail Tribune. But I know several fine journalists who got their start in Medford.

As with all newspapers, it had its ups and downs, was sometimes great, often good and, occasionally, not so. But it served Southern Oregon well and its loss is a tragedy on many levels.

I suppose all professionals view with affectionate nostalgia the places they worked, the places where their careers started, flourished and ended. But there is no workplace like an American newsroom.

I saw my first professional newsroom when I was a junior in high school. My journalism teacher had forged relationships with reporters and editors at The Register-Guard, the local daily in Eugene.

So, in my junior year I was among a few of her students covering the city’s annual pet parade, assigned to report the award results in The Guard. When the parade ended, we moved into the Guard newsroom to type up the results, just lists really, sitting at reporter desks, using their typewriters, sitting in their chairs.

It was love at first sight. The Guard newsroom was messy. Desks were covered in all manner of ephemera, books, papers, overflowing ashtrays, junk. Even though it was largely empty on a Saturday afternoon, there was still noise. The clatter of wire machines, telephones ringing. And there was a smell, a mix of sweat, ink, hot lead and cigarettes. It was wonderful. And after that first look, I never wanted to be anywhere else.

In a career path typical of an ambitious journalist, I worked for nine newspapers in total, in eight cities. And every newsroom, big or small, was the same.

The rooms all shared those qualities of clutter, noise and smell. But it was the people who made them memorable. Journalists are by nature different. They are outsiders, cynics, neurotic iconoclasts. And very, very smart. Personalities that would not be tolerated anywhere else could flourish in a newsroom.

And they could be rough places.

Even at The Guard, a relatively civilized newsroom I called home for nearly eight years, there was boisterous rough housing, crude jokes and tough insults, none to be taken too seriously. I learned to swear in that newsroom, the lessons coming from my first managing editor, a Marine veteran, who did not think much of young reporters.

I did not smoke cigarettes as nearly everyone else did. But I did develop addiction to strong black coffee, buckets of it during the day and, especially, during a night shift.

My first night city editor would adjourn to the bar across the street between editions and was bemused that I did not drink with her while still on duty.

Most of my colleagues were spectacular journalists, war veterans who took great pride in mentoring a youngster. But others were a bit less tolerant. Often, I would come to work to find the outdoor reporter’s little rat dog had left a souvenir overnight. I complained once, but he only huffed and grumbled. How could I survive in the business if I could not tolerate a little poop on my chair?

Newsrooms all had their characters. In Eugene, I worked with an old copy editor who had been a famous war correspondent. He had one leg, the other lost to drink not combat. But his stories were legend.

In St. Paul I worked with a copy editor who barked like a dog. Mostly he was drunk. But somehow his “woof, woof, bark, bark” was understood by his colleagues on the desk. They all knew what he meant.

My city editor at the old St. Paul Dispatch held morning news meetings, routine at all newspapers. But he held his in the men’s room, sitting on the toilet. If I wanted to know the day’s agenda, I had to sit in the next stall and listen. Trust me, it did not seem that strange.

Newsrooms were fun places, but intense. The work was intense. And we knew it was important.

At The Register-Guard, the family owners had a motto printed at the top of the editorial page, “A newspaper is a citizen of its community.”

Newspapers are, were, more than just the first draft of a community’s history. Newspapers at every level – daily, weekly, national – provided citizens a common language for issues big and small. They are, were, a community square where citizens could resolve problems, come to some form of public judgment if not consensus. That is what The Guard’s owners were saying.

Newspapers are, were, fundamental to a functioning American democracy. And newsrooms were the beating heart, home to journalists who saw their work as a calling and who devoted their lives to the craft.

Now those newsrooms are mostly gone. Virtually every newsroom in which I worked is gone, moved, torn down, sold to developers, relocated to strip malls.

True, my old newspapers mostly survive. But they are shadows, ghostly remnants of a dying industry. Newsrooms I have visited in recent years seem unhappy ghost towns, weary veterans sitting in the corner ruminating on the old days, youngsters wondering if they can ever make a living doing the work they trained for and love.

The United States has lost more than 2,500 newspapers since 2000, mostly weeklies serving small communities. Something more than 250 dailies have closed. The digital world is not close to replacing what has been lost.

Of course, I am nostalgic for the newsrooms where I worked, for the journalists whose lives I shared. But that is the nostalgia of an old man’s dreams, important only to me.

What we are truly losing is what newspapers bring to readers, the common language, the public square, the first draft of a community’s history.

Those losses are not the stuff of dreams, only an American nightmare.

Previous Love, Justice and Power Dominate MLK Day in Spokane
Next The Role of Blackness in the Hamline Islamic Art Controversy

I was just talking to my students last week at the newsroom of old. Any newsroom left today seems like a library, quiet and polite – not busy and full of characters like you and I remember.

HR departments eliminated the characters. Publishers cut staff and wages. And holding companies shuttered offices, sold real estate and now close papers. Not much left of what we knew.

As Smith says, we need to grasp a broader issue: the colonization of newspapers by systems of money and power. In other words, economic interests colonizing and steering all our institutions — including even longtime, family-owned, local daily newspapers such as The Register-Guard.

Instead of op-ed pages, coffee houses, universities, and other forums where the free exchange of ideas and opinions form, corporate (money) and government (power) imperatives control the direction in which our society goes. Means — money and power — become ends.

This market-is-god tendency has been intensifying over that last half-century or so. It’s not absolute. But it’s hard, I find, to deny.

The market economy and administrative state impose an ethos of instrumental rationality — knowledge for wealth and power — on journalistic, educational and other institutions.

Truth is not good in the deepest sense; rather, we have “fake news.” Values are not what is in fact valuable; rather, we have “alternative facts.” Reason is seen only in its means-end, instrumental sense, not in its practical or moral sense. Being human and the natural environment have no intrinsic value, and what it means to be human or a citizen has no higher or shared purposes, only individual purposes.

In such a culture, is there any reason The Register-Guard and other institutions should continue to have loyalty and consensus from within, respect among citizens and freedom from tight corporate and state control?

Are not such tendencies eroding journalism’s substance to oblivion and contributing to the decay of democracy in America? Thanks to Steven Smith for his reflecitions!