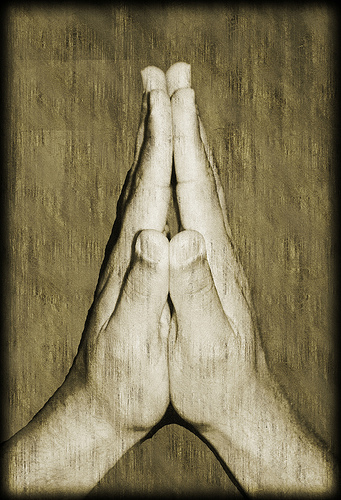 Why I’m drawn to different types of prayer

As a former English major, I’ve always been a little intrigued by the language individuals and groups use in prayer. For example, and I don’t know if this is unique to my religion (the Church of Jesus Christ of the Latter-day Saints) or if others also use it — when I was young, I would commonly hear people who were blessing a meal use the phrase “and bless the kind hands who prepared it.” I knew “hands” was a metaphor for the person (usually a mom, back then) who stood in the kitchen for hours preparing the food, but I was amused by the visual imagery of a disembodied pair of hands lovingly placing food on the table. And at the same time, I thought it was a little rude to not be mentioning the individual who did all of the work by name so he or she could get some real credit, instead of the blessing going merely to his or her metaphorical hands.

Later, I noticed that not all Christians use the formal sounding “thee, thou, thy” type words in prayer that LDS people tend to use, words that are not used at any other time by most English speakers; they are reserved only for prayer. When I lived in Spain as an adult, it was interesting to note that even though Spanish, unlike English, has a daily use formal form of “you/yours,” LDS Spanish speakers do not use it in prayer, they use the familiar form because they are addressing God their Father when they pray, and families use the familiar form. Makes complete sense.
Recently I have wondered about the word “just” that is often used in prayer by many Christians. For example, “We just want to thank you, Lord.” This seems to me to be a fairly recent development (recent as in the last 20 years or so), but I could be wrong. I’m not making a study of this; I’m just interested.
Then there is the whole topic of “vain repetition” (Matthew 6:7). I understand why we are not supposed to have it. But there are certain things that can’t help but be repeated pretty much constantly — I mean, what parent is not going to pray for his or her children daily? Inevitably, repetition creeps in. And it’s hard to creatively bless food, considering how often meals are eaten. Of course, the point isn’t to be creative; it’s to be sincere, so I assume it isn’t the repetition that is the problem, but rather, it’s the potential lack of sincerity. And I’m not referring here to formal, set prayers that are meant to be repeated for a specific reason; I’m referring to supposedly spontaneous prayers that end up sounding recycled.
I heard someone joke once that Mormons have a highly developed sense of the dangers of travel, because we so often pray at the conclusion of our meetings that we will be protected while traveling home. But, hey, traffic accidents are a real concern. Especially for those of us who live among the deer.
I’d be interested to hear other’s thoughts on this topic — phrases or words that are used and overused, how they came to be that way and how we can avoid having our spontaneous prayers sound like they’re being recited by the parrot in Northwest Seed and Pet.