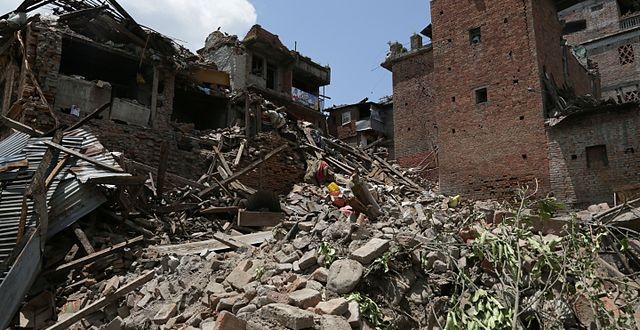 My email is about to bust wide open and my Facebook page implode with pleas for financial donations to help the recent earthquake victims in Nepal. While I am a consummate optimist, I recall sending money to the American Red Cross to help tsunami victims in 2004 and was disheartened when it took 6 months to cash my check.

Yes, I do realize that my contribution helps in the aftermath of the devastation, which can be a daunting task especially after the media blitz abates. However, I also have become a bit jaded in learning how much some CEO’s rake in even at a non-profit like the Red Cross, making me reluctant to give my hard earned cash to an organization that is apparently compelled to pay upwards of $500,000 with the justification that a half-million dollars a year is a pittance compared to their for-profit CEO counterparts take home pay skyrocketing in the millions. Just to be clear, I am not comparing the CEO pay of a non-profit to for-profit organizations, nor should any of us. That is a ruse used to help us swallow the exorbitant pay so we will continue donating.

Don’t get me wrong, the Red Cross is an amazing organization that truly helps people in need and I have had the fortunate opportunity to get a front-line view of the inner workings during the years my parents spent volunteering in local disaster relief efforts. What I do think is that we all could use a solid education in becoming diligent contributors to well run charities. Charity Navigator and GuideStar are two agencies that you can access to help research numerous non-profit organizations to learn about their mission as well as assess their level of fiscal responsibility.

After being bombarded with requests to help Nepal victims, I began digging a bit more to determine who and how I should contribute instead of simply clicking and donating. (A side note recommendation — be discerning in the source of articles you find when you begin to Google because poor journalism is even more prevalent on the web than in years past when tabloids actually had to pay to print their unsubstantiated dribble).

While I found several reliable sources in my search, the blog by Diane Cole on NPR, “What You Need To Know Before Donating To Earthquake Relief For Nepal” was especially useful as it provided a link to Charity Navigator and then a direct link to a list of reputable agencies that included their overall rating as well as their score and ranking on financial accountability and transparency. Bingo! I had hit the jackpot. Still there were forty charities I needed to review. Starting with the 5 star charities, I was able to identify two that Charity Navigator had scored over 99 percent in their financial management ratings, Map International and Direct Relief. I was finally ready to click and pay.

We currently live in an era of increasing dichotomy between those who have more than they need and those who are considered lucky if they have one meal a day and clean water to drink. While we strive to reduce this growing chasm, we can learn to be responsible and discerning in our humanitarian efforts to help without becoming miserly and judgmental. Giving to those less fortunate is actually a common theme among all major religions from Islam to Buddhism, Christianity, Judaism or Hindu – all people of faith are called to give. In the article “Giving and God: Why do people give to charities?”, Jason Franklin, adjunct professor of philanthropy at NYU, says that while “every major religion has teachings on giving”, “giving, whether religious or non-religious, is at its core about being good people.”

So be good and give — generously! Allocate your financial contributions after researching the plethora of organizations eager to receive your donations. Open your heart to the call and allow your emotions to drive, being guided by some well-researched discernment.

Previous Dear Readers, Thank You FOR Making FAVS Something to Celebrate
Next Q&A: From Ferguson to Baltimore, black America’s faith is tested