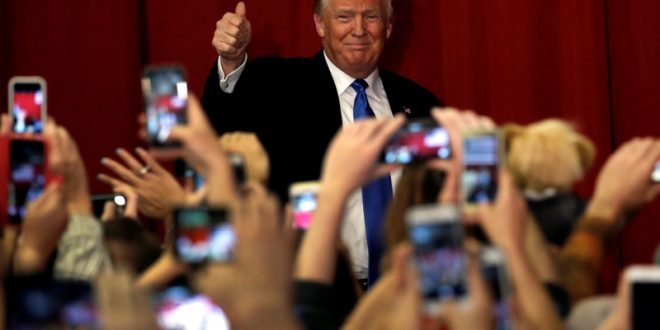 (RNS) Donald Trump is moving quickly to rally the evangelical base of the Republican Party as the presumptive GOP presidential nominee pivots toward a general election contest where the conservative Christian vote will be crucial to his chances for winning the White House.

The brash New York real estate developer has been reviled by many evangelical Christian leaders but he retains a significant appeal with grass-roots evangelicals and is increasingly winning over some leading conservative Christian activists.

The latest sign of that rapprochement emerged on Monday (May 23) with word that Trump will address a major Washington conference of conservative Christians on June 10.

David Brody of the Christian Broadcasting Network reported that Trump will speak to the “Road to Majority” conference, which is sponsored by the Faith & Freedom Coalition — run by the former head of the Christian Coalition, Ralph Reed — and Concerned Women for America, a stalwart organization of the religious right.

The event is billed as “the premier event for people of faith and conservative activists” and it will feature a host of big name evangelical leaders and politicians.

“This will be an opportunity for Trump to try and convince skeptical evangelicals to get on board the, ‘Trump Train.’ He still has work to do despite a good showing with evangelicals during the primaries,” Brody wrote.

On Friday, Time magazine also broke the news that Trump is planning a closed-door meeting in New York in the coming weeks with some 400 social conservatives in an effort to gain or solidify their support.

“We are looking for a way forward,” Tony Perkins, president of the Family Research Council, told Time’s Elizabeth Dias. “The main thing here is this is to have a conversation.”

Trump also sent a video message over the weekend to a conference of Latino evangelical leaders meeting in California. The meeting was organized by Samuel Rodriguez Jr., president of the National Hispanic Christian Leadership Conference.

As Brody wrote in an analysis of the Republican’s chances, “with the GOP presidential nomination pretty much in the bag, Trump can ill afford to think his work with evangelicals is over.”

“Skeptical evangelicals need to get to a more comfortable place. If they do, he’ll have their support,” Brody wrote.

Previous Ask A Jew: How do you deal with problematic passages in the Tanakh?
Next Friday Musical concludes season with mother-daughter performances