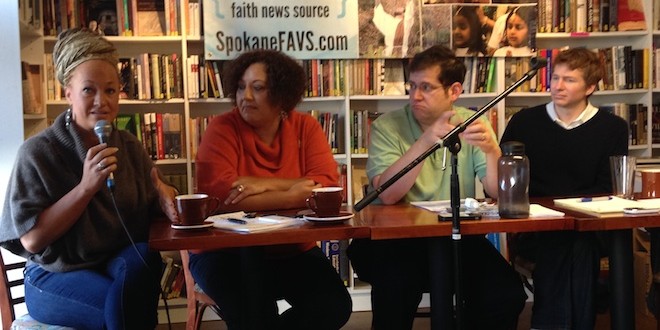 I do not know how many times I have heard this statement when I tell people of my heritage. The convoluted manner in which Americans divide themselves, having much to do with our mixed past, has again become a hot topic with both Jeb Bush claiming to be a Hispanic and the controversy swirling around Spokane local Rachael Dolezal. In our flash mob, flash opinion in 140 character statements, then soon to move onto the next big controversy, it will pass as quickly as it has captured our attention. The much needed attention on America’s growing economic divide and our warming environment will again be on the back burner. These are problems that cannot be contained in 140 characters. But watching from the sidelines, offering commentary with hands folded, will never go out of fashion.

Jeb Bush apologized and said it was an accident of love for his wife and her culture. He was forgiven and was allowed to raise more money for his recently declared presidential candidacy. While the details of Ms. Dolezal’s story are just emerging from the shadows, she too identified with family members – in her case, adopted siblings. Her story, it seems, mingles with the nation’s narrative of race. We all have to face the context of race and our relationship to this false theory of humanity born of the slave holders’ anxiety about betraying their Christian faith and the founding principles of the nation. The race theory runs counter to “All Men are created equal and endowed with certain inalienable rights.” We must remember that race theory’s origins are in the justification of slavery, which was and remains unjustifiable. This false theory was extended, after the Mexican American War, to include Mexican as a nationality. Since I am Hispanic, I have had to find my own context in it from within my own story.

I came about my Hispanic identity by way of birth and blood. I could still claim my Mexican Passport. Both my mother and father were Mexican with deep roots in Mexico and the border area. I was born in Parral Mexico, a town famous for being the town where the Mexican Federalizes killed Pancho Villa. The reason that most people have a hard time believing I am Hispanic comes from how I somehow break with their stereotype of what a Hispanic should look, sound or act like. Should I not look like what they see on TV?

They, of course, don’t question their stereotypes and own mythology. Rather, they question my roots and identity, thinking somehow I have abandoned my roots and have assimilated. Nothing could be further from the truth. I love my roots; they are just far beyond the common myths floating by in the cultural stream. The richness of my history, culture, poetry and the rest of my roots go deep. Yet since most Americans’ familiarity with Mexican culture extends only to a limited view of Mexican cuisine and media myths, they think I must be the problem. Yet they don’t examine their own complex context. If we are to go beyond our context and live into our country’s founding principles, we have to examine our context. This goes double for Christians as we know that in Christ there is no Mexican, no Mexican-American, no white, no black, for all are one in Christ. This is harder than spouting 140 characters at people you dislike.

Many have come out after the Dolezal affair with their ideological battle axes, though readily accepted Jeb’s answer of accident. I have little commentary on her story as I don’t know it well enough to comment. Joe Newby has it right by saying that she will have to suffer the consequences even as we forgive her. Again, Jesus calls us to restrain in judgement. What is coming into focus though is her complex story involving family, connections and community, much like the whole of human history, beyond the simplicity of 140 characters. If we are frank we must all face this complexity of context. We must examine this complexity to live into our calling of love.

Previous Deadly rampages: We have seen this before
Next Hate crimes happen because of judgement, separation