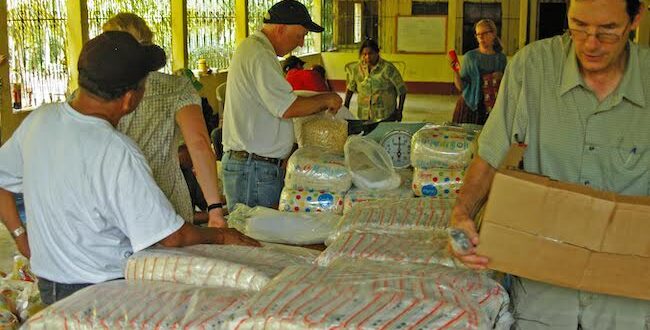 Members of a delegation to Guatemala from the Presbytery of the Inland Northwest assist Guatemalans from the Polochic River Presbytery in preparing sacks of food and other goods for victims of mudslides in nearby mountains that took place in July 2014. Photo by John McCallum - SpokaneFāVS

Mission work is one of the central tenants of the Christian faith.

Regardless of whether a mainline Protestant, evangelical or Catholic church, mission — described by author Hunter Farrell as “all the activities done for the people outside the church’s walls in the name of Jesus Christ” — has been a key focus of U.S. churches for decades. Many have allocated up to 20% of their annual budgets to projects ranging from running clothes closets, food distribution and other local needs to building houses, digging wells, establishing schools and more in countries around the world.

But is this desire to follow biblical edicts to “love our neighbors as ourselves” along with “making disciples of all nations” really having the helping, uplifting effect on others it was meant to have? Or has it become more about reinforcing a desire to show others that churches are doing good in the world or throwing money towards time-honored, yet inefficient methods of support made in man’s image, while continuing to prolong practices steeped in colonialism?

Farrell’s nearly 40 years in mission work and discussions with other workers leads him to believe the focus has shifted to the latter, and explains how, why and what can be done to shift the focus back in his 2022 book “Freeing Congregational Mission: A Practical Vision for Companionship, Cultural Humility and Co-Development.” The book and other perspectives of mission are the subject of the upcoming “Virtual Journey to Guatemala: The New Face of Mission,” a virtual presentation and discussion taking place Wednesday, Aug. 24 at 4:30 p.m..

Spokane Hamblen Park Presbyterian Church former pastor Betsey Moe said the presentation’s Guatemala theme stems from Farrell’s visit to that country at the time. The presentation is geared towards mission work of any kind, whether it is local, national or international.

“You don’t have to have an interest in Guatemala to have it apply to you,” Moe said.

Moe is currently working as a facilitator for the Intercultural Encounters Program of the Protestant Center for Pastoral Studies in Central America (CEDEPCA). She left Hamblen in March 2020 and moved to Guatemala City with her family earlier this year. Established in 1985 out of similar efforts started in the 1960s, CEDEPCA “provides North American church groups, theological seminarians and college/university students the opportunity to discover Guatemala in all its diversity, beauty and complexity and to experience the everyday life of Guatemalans through immersion programs.”

Farrell is the current director of the World Mission Initiative at the Pittsburgh Theological Seminary. Before that he spent 30 years in mission work for PCUSA, including nine years as director of World Mission.

In “Freeing Congregational Mission,” Farrell explains what many involved in mission perceive the state of this work to be. Short-term mission trips of a week or so are big business, generating an estimated $3.5 billion — $5 billion a year in revenue while programs such as child-sponsorships see more than $3 billion given annually to support orphans while pre-packaged meal programs serve over 415 million people in 74 countries in the hopes of ending hunger.

But the trips and other works in the community have turned into what Farrell calls “selfie mission,” with participants often focusing on what they are doing and their experiences rather than how the work might create community and ownership for those they are visiting. Many experts say the child-sponsorship programs — while noble — often are inefficient and counterproductive to helping children while people receiving pre-packaged meals would be better served with assistance developing self-sustaining farming practices.

Farrell also talks about mission’s roots in European colonialism, something that often worked against the noble concept of treating others as yourself espoused by the very Christians doing the work and led to subjugation and slavery. Recent focus on racial inequality has helped to reshine a brighter light on these conflicts.

“The desire to talk about race has stimulated more discussion about mission,” Moe said. “There’s new energy around it.”

Moe said she has similar worries about mission, and believes churches doing mission can actual hurt those they are trying to help by denying their equal input — and consequently keeping them from having an abundant life.

“If Guatemalans can’t share with us, they’re not having an abundant life,” she added.

The good news is there are remedies that can shift mission focus back to those being served, remedies Farrell puts forth in the book. The book also includes exercises at the end of each chapter designed by fellow World Mission Initiative at the Pittsburgh Theological Seminary professor, associate director and co-author Bala Kyllep.

“You don’t have to be leading a (mission) trip or a mission leader to attend,” she said. “You just have to be interested in doing mission.”

Previous Leonard Cohen Documentary “Hallelujah” Solidifies The Power of a Song
Next Dodging Atheism, One Note at a Time