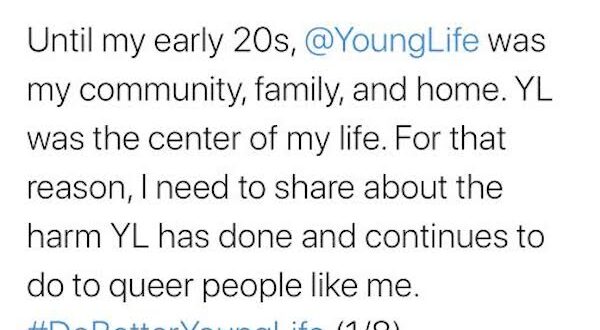 On June 30, @KentThomasMSW, a social worker in Tacoma, published a thread of Tweets detailing his experience as a queer person in YoungLife (YL), using the hashtag #DoBetterYoungLife.

The hashtag has since gained momentum; and both queer folks and their allies have been using the hashtag on Twitter and Instagram to share stories of rejection and discrimination experienced while a part of the religious youth organization.

Thomas’s story details how much YL meant to him in his adolescence and young-adulthood, while at the same time always fearing rejection for being his authentic self. “In @YoungLife, I feared that my only option was to repress my authentic self. The only community I knew was on the fence about queer people, and I was willing to do everything to stay in the fold. I prayed every day, many times for hours, that God would heal me,” Thomas tweeted on June 30.

The leaked document categorizes, “sexual intimacy outside of a heterosexual marriage relationship” as “unhealthy sexuality.” The full document can be found on the Instagram account @dobetter_younglife.

Ramsey made the decision to leave YL in May, which she attributes to a combination of burnout as well as the sexual health policy. She first learned about the policy in January when one of her friends quit YL after discovering the policy.

“After hearing about that policy I was like, ‘OK, I really need to rethink why I’m here and why I’m a part of this organization. And, like, how much is this helping me grow, and also what damage is this doing to other people and how am I perpetuating that damage by being associated and affiliated with that organization?,” Ramsey said.

A petition was launched via change.org on July 8, which includes a document titled “An open letter to Young Life administration, staff, supporters, volunteers, and participants in any capacity.”

“There have been countless stories of queer (also referred to as LGBTQIA+), low-income, and/or Black, Indigenous, People of Color (BIPOC) students being excluded, forced out, appropriated, or discriminated against. It is imperative that we address the pain of those who have been disenfranchised by an organization that claims to have room for all people. Young Life must do better if it wants to clearly represent the core message of Jesus’ life, death, and resurrection,” the letter said.

#DoBetterYoungLife, while rooted in opposition to the sexual health policy, is a call for YL to live up to the popular saying within the organization “every kid, everywhere.”

“The notion that queer leaders and staff are unqualified to spread the Gospel is inherently against the premise of the Gospel itself,” the letter said.

The YoungLife Vice President of Communications, Terry Swenson, issued a letter to staff in response to #DoBetterYoungLife that was leaked by @dobetter_younglife on Instagram. The letter states that YoungLife does not see social media as a place for fruitful conversations to take place, and encourages leaders to shift the conversation about YoungLife’s policies off of social media in favor of phone calls or emails.

Ramsey believes this is a deliberate act from YL to suppress the voices of people who have been hurt by the organization and to mitigate damage done to the organization’s reputation.

The letter from Swenson offers talking points for leaders should they choose to engage in the conversation, while making clear that the organization is not reviewing their policy or theology. It also instructs leaders to refrain from distributing the Sexual Conduct Policy to the public.

“I really respect my fellow leaders who have chosen to stay and I hope that they can fight from the inside,” Ramsey said.

An interview scheduled for this story with a YL staff member was cancelled due to a YL media policy stating staff cannot go on the record without the communications department signing off on it.

Previous Society’s Promise To Protect Children
Next Ask An Eastern Orthodox Christian: Why Has God Abandoned Us?