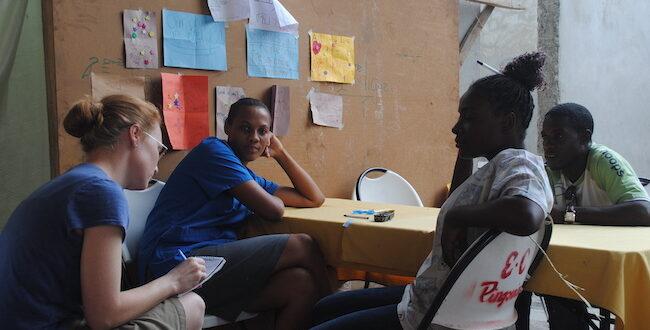 I’m one of the lucky ones. I was 15 years old when I figured out what I wanted to do with my life.

After blowing through every writing course offered at my high school, I enrolled in the only one left I hadn’t taken: journalism.

I got a pass to get out of class, talk to fascinating people and write their stories for publication.

Religion reporting came later, though – in college – and it changed my life.

I didn’t know such a specialized beat was possible. Professors talked about sports or government reporting – not faith.

While working for the school paper, I found myself drawn to the stories other writers didn’t want to pursue: a feature on a pastor in town, a reaction piece to the new Kingdom Hall of Jehovah’s Witnesses being built, Christmas worship services.

Having grown up in a cult, I was hungry to learn about the values that shaped my neighbors. I always knew the religion I practiced was wrong, because it preached hate, not love.

Religion reporting helped me escape my cult. The more I wrote about other belief systems, the more strength I found to leave and find my own path.

Two professors noticed my interest in faith stories and introduced me to the Religion News Association.

With help from mentors I met in that organization, I found my way to the religion beat, first in South Texas and then a couple years later in Lubbock.

In Texas, I wrote about the Bible Belt – a lot. But it was also where I first reported on non-Christian communities and where the preconceived notions I had about them were shattered. With more vigor than ever, I went from the Lone Star State to New England.

It was the perfect place for a young, energetic religion writer.

African Methodist Churches were a stone’s throw from mosques and synagogues. I met Archbishop Desmond Tutu, and I’ll never forget jumping on a train to New York City to cover Pope Benedict and, later, the Dalai Lama.

I was in heaven, so to speak.

But in 2009, the economy crashed and the newspaper I worked for found itself having to nix the religion section. This happened to newspapers all across the country at the time.

That’s when I became an entrepreneur, even though I didn’t plan to.

I believed people wanted to know about the beliefs of those who made up their communities. I’m confident that through the power of storytelling, we can break down walls and come to understand one another.

So as an independent journalist, I launched an online publication covering religion news and commentary across Connecticut.

Sound familiar? It should! This is how SpokaneFāVS.com began, almost 10 years ago now.

I sold my Connecticut publication to a wire service and moved here to cover religion news in the Pacific Northwest.

Running SpokaneFāVS is not a lucrative gig, and it is expensive. I believe our professional journalists, who write fact-based religion stories, deserve to be paid. We have 40 opinion writers as well, who are unpaid, and I’m so grateful for their volunteerism.

Right now, we have a campaign going to raise funds solely for the purpose of paying our professional journalists (givebutter.com/SpokanefavsCovid). As we enter the season of giving, I’m hoping you’ll consider making a gift to this journalism enterprise.

I’m lucky in that I’m getting to do what I want with this life.

I’m hoping this campaign will help others do that as well.