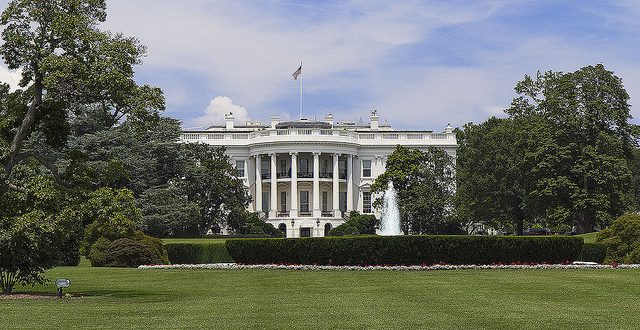 Flickr photo of The White House by Stefan Fussan

Do we need political chaos to finally care?

In the whirlwind pace of news, outrage, and defensive walls of the past six weeks, many American Christians are struggling with what their beliefs mean when applied to the democracy-based republic form of government. While there are some Christians on both sides of the political aisle who have no doubts of the truth of their interpretations of the Bible and what it means for their personal politics, there are others that are caught with a lot of questions.  There is a struggle for some of us as we see how the wristband Jesus sold in the 90s (WWJD) can’t really prepare a person for a life of faith in incredibly complex situations.  The majority of political discourse seems to fall into diametrically opposed sides, with little understanding of the nuances and complexities of any of the issues that have been thrust into the discourse during the last week. Both sides claim the moral high ground, while grounding their arguments in religious ideals.  Arguments on vital issues — access to healthcare, immigration, and how we as a country treat our poor — ignore the full of the complexities of human experience and instead have been shrunk down to 140 characters and a meme.

I had coffee with a cultural anthropologist this past week, and I asked him if he looked at current happenings with a certain professional curiosity. His response was jarring and a bit chilling. I wasn’t expecting him to say that things looked like they would, in fact, continue to get worse. “Maybe we need the worst – the worst of all of the predictions – to come true.”  It wasn’t said with an evil grin, or while he was twirling up the corners of his moustache hoping for the failure of President Trump and thus the country.   Rather, he pointed to the relatively fat, dumb, and happy place that the majority of Americans have lived in over the past couple of generations.  Americans, in his argument, are not informed in a broad sense, and due to various reasons have not turned out to do things like vote.  This thought seems to be echoed by the commentaries on the Women’s March that said “imagine if these women would have voted.” We have a republic whose policies are set by politicians who, according to Pew Research, are elected out of only 50 percent of the voting eligible population. In countries like Belgium and Turkey, over 84 percent of eligible voters turn out. From my friend’s perspective, the vitriol brewing through the Clinton, Bush, and Obama presidencies was bound to boil over, almost in spite of who won in this past election. The Trump experience, both of his unabashed supporters and his staunch critics are pieces of the same cloth my friend argued. Before people care enough to truly define what they believe what actions they are willing to take, chaos will spread deeper until we reach a breaking point.

The conversation begs the question on two fronts:  Are we heading toward deep, systems changing chaos both in our political system and in our religion?

A former patient in a clinic I worked in would routinely discuss the government’s desire to come to his land outside of Cheney to confiscate his guns in order to keep some utopian peace. He knew he had seen the black helicopters, and this was before he told me he’d like to put a bullet in the Democratic nominee’s head to ensure his rights.  In the first week of the Trump presidency, he Tweeted that maybe the feds should go into Chicago – calling on those images of landing helicopters to take guns, squash violence, and keep peace.  Often we are guilty of creating our politics by saying “going after me is oppression.  Going after others is keeping us safe” or “if it doesn’t affect me, it doesn’t matter.”  Stopping the federal government from bullying citizens, whether in Chicago or Cheney, seemed to be a core belief of many Americans. Now, people who railed against Obama’s Second Amendment interpretation back Trump’s First Amendment attacks and calls to take guns away from citizens. Only the parts of the Constitution that we to agree with are held up to support our self-labeled patriotism, no matter party affiliation. Strident supporters of the military have tacitly accepted inexperienced Steve Bannon’s placement and the Joint Chief’s removal from the Security Council. Trump ran on promises of helping the middle class regain prestige and jobs, while so far, he has governed on empowering big business and removing policies to protect people.  Will we as a people be able to continue to hold to their paradoxical beliefs about personal and common rights without reaching an existential, if not constitutional crisis?

Some have described the political pendulum swing from No-Drama Obama to Trump as inevitable.  In most industries, when one manager leaves, the replacement tends to be the opposite of what left. In sports, a “player’s coach” is replaced by an “old school disciplinarian.”  The steadiness of the Obama years has given way to what seems to be a chaotic first few months of the new year as leadership has made a deep and jarring shift.

Seeing demagoguery in action is jolting. We’ve seen it from those on the left as well as the right.  We’ve branded leaders in as broad of brush strokes as we can, leaving the canvas splattered with hero worship. Is what we’re seeing in the political discourse simply the next step in our modern evolution as those living in the republic? As people react to the protests and outrage on issues as they’re covered in the media (fake and otherwise), it may all lead to a stronger, better informed people who, by participating, lead to a stronger American governmental and cultural system. If, as my friend said, we need chaos in order to finally care, we might be headed into the depths of the deep rich dirt in order to plant seeds for democracy’s further growth.

At the same time that people are being pushed to understand their own political beliefs, there are calls for Christians to clarify their beliefs as they act in the world.  Non-church goers have often cried out against the hypocrisies of Christians.  My churchgoing grandmother rails against those that shake your hand in the pews on Sunday – but forget you on the street on Wednesday. People look at what we say and our actions in the world and the disconnect leads to confusion. While labels of hypocrisy aren’t new, it seems that lately core Christian principles have been called into question.  Evangelical leader Franklin Graham has spoken out against Disney’s new “Beauty and the Beast” movie as promoting an anti-bible homosexual agenda, while at the same time saying that refugees were not a biblical issue.  A fictionalized artistic piece is worth religious ire, yet widows and orphans aren’t worth biblical action according to this world view. As a Christian, I don’t understand this theology. I’d love to say that it is limited to one man, however, we’ve seen various incarnations of this same thought. Christians on the right, who profess the power of a redeeming God have said they know that God can use the flawed President Trump – while those same people never applied that same standard to their discussions of President Obama.  He was simply flawed and un-Godly in their talk, not capable of redemption or being able to be used for God’s work.  Just as with the Constitution, we seem to use the Bible and theology to prove our way of thinking is right in the “us vs. them” form of Christianity.  Do we continue in our Christian beliefs, as with our political beliefs, to be able to hold these duplicitous ideas?  Or, are these seemingly constant challenges leading us to deeper chaos, and out of that chaos deeper understanding and abiding belief?

I have to admit that I did not speak out when President Obama balked at intervention in Syria.  I did not speak out as the Obama administration killed a record number of people in drone attacks, including a United States citizen.  I was confused and wrote it off as being unChristian, but in some way a necessary evil of protecting other American citizens.  My own theology, political beliefs, and Christianity is deeply flawed.  I am an American who didn’t express outrage over Presidents Bush or Obama. I didn’t march. I didn’t use my voice. In reality, as a white, middle-class, middle-aged male, I really don’t have anything to fear or to worry about within the Trump administration and can easily remain silent.  I am relatively safe unless chaos truly arrives and the worst of pictures being painted by the left come to fruition. If I maintain my selfish world view and never think of others, then my Christianity is dead.  My voting, worshiping, and actions based on limited Christianity cannot bring about change to the groaning world, and does not support the deep love we’re called to.  I’m hoping my friend is right in some ways.  I’m hopeful that the chaos in the external world continues to create chaos in my heart. And out of that chaos, something real blossoms.