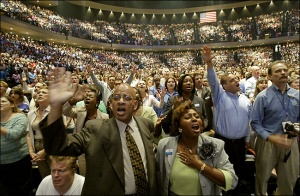 Diversity in the Pews: What you can do

This is part two of a three-part series on segregation and church. Read part one here and part two here.

There are steps of action that can be taken to prevent church segregation.

Previous Efforts To Deal With Church Segregation
In the past, local religious leaders attempted to deal with church segregation.
“For a season, it was a fad where folks became excited,” said Rodney McAuley, director of community and church engagement for Spokane Youth for Christ. “We did events and projects where we began the process of tearing down those walls, but when it got tough or when we bumped up against the real life difficulties and challenges around our differences, we, in my estimation, did not maintain the intentionality to see the breakthrough.”

One effort was an event in the arena, which occurred twice 10 years apart. Participants washed each other’s feet and established a covenant of reconciliation that included a commitment of church leaders to exchange pulpits.

“We failed to follow through,” McAuley said. “We dropped the ball. In dropping the ball, there was a furtherance of mistrust, anger and resentment.”

Current Efforts Being Made
“There are pockets of unity that are surfacing that are really encouraging to me, but we still have a ways to go,” McAuley said. “There are different projects that are in play right now in our city that even though they are not specifically speaking about racial segregation, they are addressing the racial segregation.”

Once such project is taking place this summer. A group of African American churches are partnering with the police department in a basketball league. This is tangible movement toward racial reconciliation, he said.

Another effort involves churches of various races and denominations coming together to address needs in the community, such as poverty.

“While it is not racial reconciliation in its premise, the idea that folks from the different racial parts of the faith community are coming together and pursuing working together to resolve common issues lends itself to an opportunity to surface and deal with the reasons we have operated separately from each other,” McAuley said. “By surfacing the discussion, we are better able to speak to the things that divide us racially.”

His organization,  Youth For Christ, is an organization whose ministry model uses evangelism and social justice. This has a reconciliation component to it because many churches emphasize one of those components, McAuley said.

“The ministry model of YFC, in bringing the two of those together, surfaces the opportunity to have conversations around racial segregation,” he said. “As we are learning how to work together to go beneath the surface and identify root causes for agreed upon issues, then we are maturing slowly but surely in being able to deal with what have been difficult subjects around race.”

Another group in Spokane working to deal with racial segregation is New Community. One step the church has taken is speaking in services on racism and the idea of shalom, God’s desire of peace for the city.

“In the more personal, small group type settings, we work to be really seeking to love others, to find ourselves planted in neighborhoods or being involved in schools,” said Russ Davis, pastor of New Community.

Some of New Community’s church plants met and worship with other churches on a frequent basis, such as Emmaus Church.

The Role of the Church Attendee
McAuley and Davis suggest ways church attendees can take action.

“The idea with regards to the issue of racial segregation in the church is to come together as transcendent brothers and sisters in Christ and deal with issues that have so long divided us,” McAuley said.

This coming together is done in the context of one body, one faith, one Lord, one baptism, and with the idea that we need each other, McAuley said. To achieve this, McAuley has a slogan of the seven C’s: continuous covenantal courageous conversations create caring communities. The idea is that discussion keeps occurring, individuals stay in covenant and do not walk away from each other during disagreements, and discussion goes beyond talk and leads to action, McAuley said.

Church goers can have an impact through their willingness to adapt their church service style, such as type of music and preaching style, to other’s styles.

“In order for church gatherings to change there has to be an openness within the community to willingly invite other people’s expressions of worship to supersede their expressions,” Davis said. “For example, if you were a part of a church that doesn’t have any drums and you want to interact a demographic in the community that loves having drums, if you really desire to love and include them, then you should have drums every week, regardless on whether that is your preference.”

Church attendees can also take action by loving their neighbor.

“Have your neighbor over for a barbecue, get to know them, know their kids’ names, spend time together,” he said. “You can’t pretend to understand other people’s situations until you actually know them. If you don’t know your neighbor by name, if you don’t actually love people who are different than you, then I don’t think we are living out what Christ called us to do.”