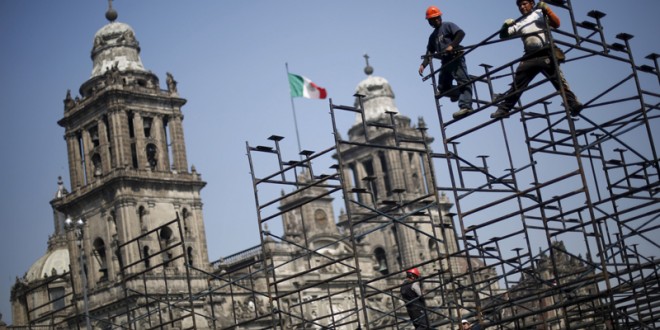 Workers prepare the grandstands outside Metropolitan Cathedral in preparation for the upcoming visit of Pope Francis to Mexico City, on February 5, 2016. Photo courtesy of REUTERS/Edgard Garrido *Editors: This photo may only be republished with RNS-POPE-MEXICO, originally transmitted on Feb. 10, 2016.

MEXICO CITY (RNS) On a recent morning outside the Church of San Agustin in the middle-class neighborhood of Narvarte, two students sell bric-a-brac and blast the Beatles’ “Let It Be” through a smartphone hooked up to speakers.

When asked what Pope Francis’ first visit to the country as pontiff on Friday (Feb. 12) means to them, they shrug.

“It’s not like he’s going to come in and magically make all of our problems go away,” said Uriel Velazquez Tonantzin, 20, who dropped out of seminary a year ago to take a music composition program.

Tonantzin’s brother is a priest. His companion, Cristo Villanueva Hernandez, is related to the San Agustin parish priest, making both men’s faith a personal, family affair.

That is increasingly typical in current trends among Mexican Catholics, say analysts: Faith here is strong and tied to family and culture, but many are increasingly disillusioned with the church and feel it is out of touch.

The Pew Research Center estimates that some 86 percent of Mexicans identify as Catholic — making it the world’s second-largest Catholic country after Brazil. Still, research conducted by Andrew Chesnut, a professor of religious studies at Virginia Commonwealth University, suggests only a quarter of that number are regular Mass-goers.

Even though more than half of the country’s population lives below the poverty line, according to the World Bank, “the Mexican church is not a ‘church of the poor,’” Chesnut said. Its leaders don’t emphasize poverty.

They also lag behind in addressing Mexico’s bloody war on drugs, which has left 77,000 people dead and 30,000 missing since 2006, according to Human Rights Watch, Chesnut said.

That’s why Pope Francis’ itinerary is freighted with symbolism. It includes stops at Ciudad Juarez — the border city named “murder capital of the world” in 2010 — as well as Morelia, San Cristobal de las Casas and Ecatepec, cities crippled by violence, poverty and discrimination against indigenous populations.

“It’s hoped that Pope Francis’ visit will galvanize the country’s bishops,” Chesnut said. In many ways the pontiff and Cardinal Norberto Rivera, the archbishop of Mexico City, are seen as “diametrically opposed,” when it comes to their stance on the poor.

“It’s not enough for a few courageous bishops around the country to take a stand,” he added. “The hierarchy as a whole must speak out.”

The Basilica of the Virgin of Guadalupe is a 40-minute Metro ride from the students’ parish, but it feels like a different city. On Feb. 13, Pope Francis will pray before the image of the Virgin, who, it is believed, appeared miraculously to St. Juan Diego in 1531.

Whatever their opinions on the church, local business owners were not enthusiastic about the pope’s visit.

“They’re clearing us out for the duration of his visit — I’ll lose about three days of business,” said Michael Gutierrez, 53, a self-described believer who sells silver religious jewelry near the basilica.

Taxi driver Javier Ruiz, 55, won’t be allowed to work near the basilica, either, but his skepticism concerning Pope Francis runs deeper than financial issues.

For Mexicans living on the edge of poverty, however, the pope’s visit is a source of strength.

Homemaker Elvira Garcia Salazar, 50, sits on the basilica steps with her 19-year-old son, Andres, a stylist. They’re from Azcapotzalco, a poor residential area choked by pollution from the district’s large oil refinery. Her son’s 14-hour days at the salon bring in little more than the recently fixed national minimum wage of 70 pesos, or $3.70, a day.

“We really need the pope to come,” she said. “There is so much evil in Mexico today. Pope Francis’ mandate is for peace, and it comes from God. I want to believe he will transmit the love we need.

“I’ll fast the day before he comes, and I’ll be here at the basilica from 7 a.m.,” she added. “And I will walk out of here feeling like a giant.”

Previous Obama’s speech at Baltimore mosque was powerful, but was anyone listening?
Next Film Festival coming to Whitworth