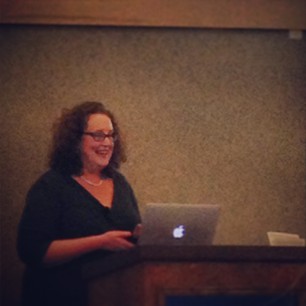 Discussing the intersection of Judaism and feminism

Judaic scholar Andrea Lieber concluded her visit to Gonzaga University Monday evening by discussing the intersection of feminism and Judaism and examining ways the faith is evolving when it comes to gender roles, as well as ways it continues to grapple with traditional customs.

Lieber is a professor of religious studies at Dickinson College and author of “The Essential Guide to Jewish Prayer and Practices.” She began her visit to Spokane by delivering a lecture on the Holocaust Sunday evening for Yom Hashoah.

During her keynote address, “Reconfiguring Jewish Female Space,” Lieber pointed to three sacred texts that have been key in defining traditional Jewish gender roles. Proverbs 31 explains the “ideal type of woman.” Mishnah Kiddushin 1:7 explains what commandments woman are and are not exempt from. Women, she said, are excused from certain rituals so that they can tend to the home. And Psalm 45:13, “suggests women’s true glory is interior,” Lieber noted.

Lieber said these texts led to the rabbinic mindset that men are to enact their piety in the public sphere, and women in the private.

This mentality, however, was confronted in the U.S. in the 1970s when the first female rabbi, Sally Priesand, was ordained. This was a product of the second-wave feminist movement, Lieber said.

Today females can be ordained in most Jewish traditions. Lieber said there’s even been noise about it in Orthodox circles in recent years.

However, she noted, women remain underrepresented in top positions in many synagogues.

Though there have been steps toward equality, Lieber said Scriptures are still used to keep men and women separate.

“I think what’s happening in Jerusalem right now really gets to the heart of this public, private thing,” she said.

At the Western Wall, or Kotel, a partition keeps men and women apart while praying. At the wall, women are not allowed to hold or read from the Torah, blow a shofar or wear a prayer shawl.

A group called Women of the Wall has been calling attention to this issue, fighting for women’s rights at the wall. Once a month they gather at the wall to read aloud and pray. Each month they are arrested.

“These women can go into a synagogue in Israel and do exactly what they’re doing, the issue is that they want to do this in public,” Lieber said. “The issue is interesting to me. It’s women expressing their piety the way men are supposed to, and not in the way that conforms to traditional notions of female piety.”

Another way Jewish women are reconfiguring female space, she said, is through the Web. Through blogs like Nice Jewish Girl, (discontinued) who wrote about her sexual frustrations, Orthodox Jewish woman have found new ways to express themselves.

“None of them (bloggers) used the word feminist. None of them were looking to leave their communities,” Lieber said. “They reached out to a broader network of women and extended their private sphere beyond the few people who sit near them in synagogue.”

Finally, Lieber said, mikveh is changing in many liberal Jewish communities. Traditionally mikveh, or ritual bath, is where women go to regain ritual purity after impure events have occurred — like menstruation.

More commonly mikvehs are now being built to serve as a haven for women, a place where they can go to feel empowered, similar to a spa, Lieber said. In some communities men and women are both using mikvehs (on different days) to mark important transitions, like the end of chemo therapy, or the end of an abusive relationship, she explained.

Lieber said gender roles remain a hot topic, but said in today’s world Jews have “the blessing of choice” to navigate the demands of the public and private spheres.

Previous Are we galactic muckrakers?
Next April Coffee Talk