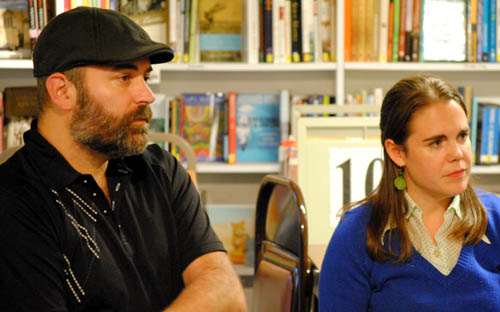 Washington’s same-sex marriage legislation is tugging at the heartstrings of the state’s faith community.

Is it both a legal and a religious issue? Should the church respond? If so, what’s the appropriate response?

About a dozen people came together to discuss these topics Monday evening at Indaba Coffee for  “Can We Talk? An Open and Civil Conversation about Marriage,” an informal Referendum 74 discussion group.

The group, made of people of different faith and political backgrounds – though mostly liberal — discussed the purpose of marriage, the history of the tradition and the church’s involvement in it, among other subjects.

The Rev. Tom Altepeter, of St. Clare Ecumenical Catholic Community, said he wonders if the church should at all be involved in the same-sex marriage debate, noting it’s a political issue.

“What role does the Bible have at all in this, seeing as how it’s a legal discussion?,” he asked.

But Eric Blauer, pastor of Jacob’s Well and a SpokaneFAVS blogger, said marriage is a biblical narrative, a sacred discussion and a basic religious community event.

Aaron Weirdert agreed that marriage has a long history in religious communities and said even though Washington has “Everything But Marriage” rights for same-sex couples, the concept of marriage is significant and has meaning.

“It (marriage) brings something to the unit…No matter which side you’re on, it’s still important,” he said.

But Blauer rebuttled, saying what many have said — if Washington legalizes gay marriage, what’s next?

Bishop Blase Cupich, of the Catholic Diocese of Spokane, for example, recently wrote, “If marriage is only about relationships, why limit unions to two people? Why does the new law include the traditional prohibition of close kinship unions for both opposite and same sex couples?”

“If I say yes to this, what am I going to yes to down the road?” Blauer said. “Who gets to determine what the narrative is?”

The group agreed that if one loses focus it could be a slippery slope, but urged those worried about future issues to focus on the issue at hand.

Though the group only met for an hour, it touched on many issues and Larson said she hopes people went home realizing that marriage is a blessing for the world and the community and hopes to have more conversations about the issue in the future.

Previous VOTE: Which is your FAV phone pic for the Liturgy Art Project?
Next Marriage talk