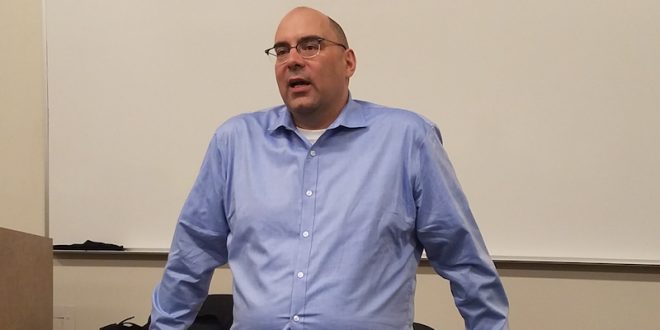 Devin Burghart, president of the Institute for Research and Education on Human Rights. Photo by Matthew Kincannon

Discussing white nationalism and how to stop it

Devin Burghart, president of the Institute for Research and Education on Human Rights (IREHR), gave a presentation discussing the history and presence of white nationalism in both Washington State and the United States, at Gonzaga University Saturday afternoon based on social, political, and religious aspects, and what people can do to prevent it.

Burghart said the event was inspired by an attack in Portland, Oregon where Jeremy Joseph Christian fatally stabbed Ricky John and Taliesin Myrddin Namkai-Meche after both men confronted Christian for harassing two women (one of whom was Muslim) on a train.

Mariah McKay, a member of FUSE Washington and an organizer of the event, said she went to Reed College with one of the victims and the attack “was way too close for comfort.”

McKay said she was talking to Burghart and found out he was visiting family in Spokane over the weekend and “generously volunteered to share his expertise and knowledge” on the subject of white nationalism.

At the beginning of the presentation, Burghart described the amount of time he has put into researching racism and other issues across the United States.

“For the last 25 years, I have spent most of my time researching and documenting the most vile forms of racism, anti-Semitism, homophobia, Islamophobia, nativism and other forms of bigotry you could possibly imagine,” Burghart said.

He added he has been to “cow pasture Klan rallies, backwards militia meetings, giant Tea Party gatherings and everything in-between” to both figure out what these groups are doing and what they are all about.

In his introduction, Burghart used the Rev. William Barber II quote, “It’s not about left versus right…It’s about right versus wrong,”

Throughout the presentation, Burghart discussed incidents involving white nationalist and white supremacist individuals and groups throughout 2016 and 2017. These incidents include vandalism such as graffiti spray-painted on a wall that said, “MAKE AMERICA WHITE AGAIN” with a swastika in the middle, and racist graffiti sprayed on Spokane Community Center where the NAACP meets. Other incidents Burghart cited included arson where a mosque in West Seattle was burned down, harassment of two Muslim men by an armed man outside a Seattle mosque, white nationalist flyers appearing throughout Washington, Idaho and Oregon, and several other incidents.

Against the backdrop of these events, Burghart said he wanted to talk about three subjects throughout the presentation. The first is defining what white nationalism is, the second is how these ideas have moved “from the margins to the mainstream” over the past 30 years, and third being about what people can do to stop white nationalism.

Burghart defined white nationalism as, “The belief that national identity should be built around white ethnicity, and that white people should therefore maintain both a demographic majority and dominance of the nation’s culture and public life.”

“White supremacy is based on the racist belief that white people are innately superior to people of other races,” Burghart said. “White nationalism, however, goes beyond that, it talks about maintaining political and economic dominance, not just numerical, majority, or cultural hegemony.”

He added white nationalists are not just tied to their geographical location, but also “bonded by their skin color.”

Burghart described the various “Old School” groups involved with white nationalism and white supremacy including the Ku Klux Klan, Neo-Nazi or “White Power Skinheads,” Holocaust deniers, and those who consider themselves “Christian Identity.”

“Now, I don’t think there’s anything particularly Christian about this,” Burghart said. “Christian identity used to be the theological glue which bound together white supremacists.”

He said those within the Christian Identity group took passages from the Bible, particularly the Old Testament, “perverting it” to say that “people of color were sub-human, often equating them with beasts of the field, that Jews were the literal descendants of Satan, that violence and acts of terror were biblically warranted.”

Burghart said most of these groups have decreased as of recent times, but other groups have grown throughout the 2000s. These groups include nativists and Islamophobes.

He described how nativist groups gained momentum after former President Lyndon B. Johnson passed the Immigration Act of 1965 because it helped make the United States a more “multiracial society.”

“It is that very battle from that day one that the new nativists have been fighting against,” Burghart said. “They’ve been working hard to try to make sure that we look more like we did in 1924 than we look like in 2017.”

Burghart said the first of the new nativist organizations began in 1979, has grown to a budget of around $14 million a year and has attracted “hundreds of congressmen and gaining a foothold inside the corridors of Washington D.C.”

He added that the ideas of the Muslim ban, travel ban, restricting immigration and building the border wall came from the new nativists, serving as an example of how “the margins have moved to the mainstream.”

Burghart described how nativists have been successful in “capitalizing on America’s fears post-9/11.”

“After September 11, they realized that they could capitalize on the fears about Muslims and Muslim immigrants and employ Islamophobia,” Burghart said. “And anti-Muslim bias is a way to stir-up additional membership and gain additional folks.”

Burghart said the election of former President Barack Obama and the “destruction of the white monopoly of the presidency,” resulted in the various white nationalist groups all flowing into one through “Tea Party Nationalism.”

Brughart said Tea Party Nationalism grew through “very little challenge to it,” and capitalizing on the “implicit fears that white Americans had about the changing demographics.”

He described how the Tea Party, at its core, was “concerned about the changing demographics of this country,” rather than debt and taxes.

According to Burghart, around 18 percent of the public has expressed sympathy towards the Tea Party, with around 6 – 8 million supporters.

Burghart explained how “race and a sense of ‘white dispossession’ have dominated Tea Party politics from day one,” and the group has had a radicalization effect based on a longitudinal study where the longer an individual was involved with the group, the more racist they would become.

Other groups and individuals he discussed included the Three Percenters, the Proud Boys, Richard Spencer, Steve Bannon, and other militia groups and sovereign citizens.

Close to the end of the presentation, Burghart brought up the Dr. Martin Luther King Jr. quote “We may have all come on different ships, but we’re in the same boat now.”

At the end of the presentation, Burghart introduced an app called “Trepper,” that is currently in development.

According the Burghart, the app is designed to be an “anti-bigotry app” where people will get notifications if events of concern are occurring nearby.

The app will also allow people to document the events through anonymous videos and submit report forms to let others know of what is going on, along with other features.

Burghart said the app will be available for both IOS and Android, and people can sign up as beta testers for the app through emailing dburghart@irehr.org.

During the discussion portion of the event, James Sanderson, an African American attendee, discussed issues he has seen in Spokane.

Sanderson said he has not seen a black neighborhood or radio station in Spokane, and explained how Black Lens News has only been around for two years.

“If somebody’s going to tell me something that’s going on here, I wouldn’t know,” Sanderson said. “How do I grow and learn as a culture, not as a Spokanian because I’m not a Spokanian.”

Sanderson mentioned an instance where a neighbor of his walked up to him and asked Sanderson “You’ve been gone for 14 hours, are you a drug dealer?” despite Sanderson wearing his work clothes.

“Bottom line is, the racism here is so thick I could cut it with a butter knife,” Sanderson said.

Close to the end of the open discussion, Burghart recommended Leonard Zeskind’s “Blood and Politics: The History of the White Nationalist Movement from the Margins to the Mainstream” for attendees to learn more about white nationalism and white supremacy.

Previous Ask a Buddhist: How do I become a Buddhist?
Next Faced with declining numbers, Southern Baptists focus on evangelism