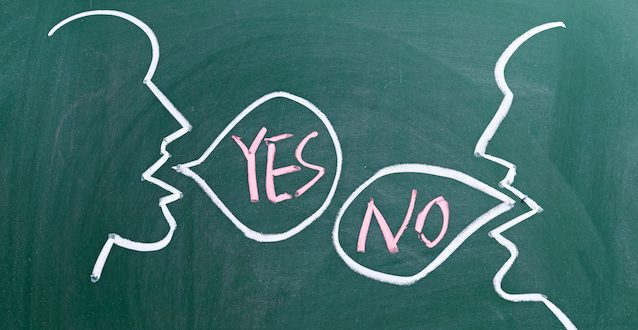 Disagreements for the sake of heaven

From a Jewish perspective, agreeing to disagree is nothing new. Rabbi Rachel Barenblat, who blogs as the Velveteen Rabbi, explains the ancient principle of machloket l’shem shemayim (“disagreements for the sake of heaven”) as follows:

It means arguing the issues while respecting and maintaining good relationships with the other side, making sure that your personal motivation is to come to the best solution and not just to win, admitting when you are wrong, and acknowledging that both sides might be right.

This description of respectful, constructive arguing sounds like a fantasy in light of America’s current degree of political polarization. Yet, thanks to our long-standing traditions of endless reinterpretation and intellectual debate, we Jews know well that people with starkly different views must agree to disagree. What choice do they have?

I moved to Spokane in 2011 after living in one liberal bubble after another. I grew up in a progressive Reconstructionist Jewish community in Detroit. I attended Oberlin College, the notoriously left-leaning liberal arts school. After graduating in 2001, I moved to Seattle, a veritable wonderland of American progressivism and, by some accounts, an unsafe space for conservatives.

In Seattle, my lefty attitudes on divisive issues came into full flower. LGBTQ rights, reproductive freedom, the evils of untrammeled capitalism? I knew where I stood. As you might expect, when I moved to Spokane in 2011 for grad school, I was in for quite the culture clash.

In more than seven years of living here, I’ve had many opportunities to disagree for the sake of heaven. Remaining respectful, sincere, and humble in that process isn’t always easy. This may be in part because American society trains us to win rather than work toward reconciliation. In addition, many of us learn early on that there’s objective truth, and that if our side doesn’t have an outright monopoly on it, it has, at the very least, a majority share.

Since coming to Spokane, I’ve sparred with unlike-minded peers about sexual ethics, identity politics, police brutality, Islamophobia, anti-Semitism, pacifism, and more. I’ve gone many rounds with an evangelical pastor who’s every bit as bearded, enamored of meat, and conventionally masculine as I am clean-shaven, vegetarian, and, well, not exactly Tom Selleck in the ’80s.

I’ve even expanded my media consumption in order to get further outside the liberal bubble. I listen to left-leaning news analysis shows like “On Point” and “The Daily” on NPR, but also right-wing evangelical talk shows like “In the Market with Janet Parshall” and “Straight Talk with Gary Randall.” I wrote for FAVS about my relationship with Randall’s show, and then wrote about it again.

I do gnash my teeth sometimes while doing this opposition research, but I can’t deny that a lot of the people I encounter in the Spokane area likely share the biblical-literalist views of Parshall, Randall, and their faithful listeners. It’s better for me to understand how conservatives think — and hopefully develop some degree of empathy in the process — than to stay in the dark.

All things considered, I’m grateful to live in a place where the political spectrum is wide. I understand my own views better because I’ve had to explain and even defend them to thoughtful, genuinely curious people. And yet, in an age of increasing white supremacist violence, it’s vital to acknowledge that there’s some rhetoric I can’t just agree to disagree with, but instead feel compelled to speak out against.

The Jewish political cartoonist Eli Valley, whose M.O. seems to include gleefully offending one half of the internet while amusing the other, captured this memorably in his recent depiction of the Jewish conservative pundit (and unrepentant Islamophobe) Ben Shapiro. As Nathan Robinson entertainingly explained in 2017, Shapiro represents a decidedly un-heavenly form of argumentation: disrespectful, arrogant, and hellbent on “destroying” ideological foes. While it’s much more pleasant to focus on exemplars of “heavenly” disagreement, it’s also worth keeping in mind counterexamples like Shapiro, whose previously scheduled speaking engagement at Gonzaga is finally off for good.

FAVS has long excelled at bringing together diverse voices, online and in person, to discuss challenging topics. In the last few months, Temple Beth Shalom worked on a similar project: a series of panel discussions, meant primarily for Jewish community members, that addressed aspects of the Israel/Palestine conflict. As our wounded country tries desperately to clamber back from several years of divisive rhetoric from the Polarizer-in-Chief and his rotating band of mouthpieces and minions, I see at least some hope in any forum whose goal is disagreements for the sake of heaven.

When we engage in meaningful, constructive dialogue, we see that even people whose views we strenuously oppose are people, like us — a mix of good and bad, frailties and virtues. We benefit ourselves and others when we refuse to demonize our political adversaries. At the same time, we must hold space for condemning attitudes like those that fueled the mosque shootings in Christchurch — viewpoints that violate decency and take us about as far from heaven as it’s possible to go.

Previous 50% off FāVS ads, now through Easter
Next 3 Lenten practices to teach you about God, community