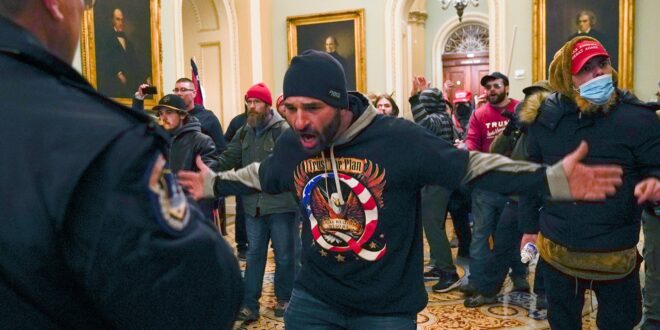 In this Jan. 6, 2021, file photo, Trump supporters, including Doug Jensen, center, confront U.S. Capitol Police in the hallway outside of the U.S. Senate chamber at the Capitol in Washington. (AP Photo/Manuel Balce Ceneta, File)

As investigations of the Jan. 6 U.S. Capitol riot proceed, there’s an intriguing religion angle for the media to explore. Welcome to the emerging prominence of “D.I.Y. Christianity” (that is, Do It Yourself).

After some of the Capitol rioters uttered odd prayers and waved religious placards, The New York Times reported that they demonstrated “some parts of white evangelical power.” GetReligion boss Terry Mattingly then asked whether the mob included any representatives of actual “power” seen in the denominations, megachurches, parachurch ministries, schools or even the flocks of well-publicized Trumpite preachers.

(Despite the absence of evangelical leaders, freelancer Steve Rabey reports that several obscure Protestant pastors do face charges over Jan. 6.)

Washington Post stalwart Michelle Boorstein revisited Jan. 6 as a religious phenomenon and caught the moment by applying the D.I.Y. label not just for certain Capitol rioters but a broader trend emphasized by Adam Greenway, president of Southwestern Baptist Theological Seminary.

The D.I.Y. phenomenon could become the decade’s next big thing in religion, a sizable groundswell of extremely individualistic or eccentric Americans who identify as Christians but are disconnected from conventional churches or even any definable religious fellowship or tradition.

Such radical individualism follows, of course, years of significant growth for non-denominational local congregations that are rigidly independent and lack ties or accountability with other Christians. This growing segment of U.S. evangelical Protestantism is nearly impossible to count accurately and thus its significance has often been neglected by journalists and scholars. GetReligion has been underlining the importance of this trend for years.

The Post cited analysts who believe one element on Jan. 6 was that “institutional religion is breaking apart, becoming more individualized and more disconnected from denominations, theological credentials and oversight.” Yale sociologist Philip Gorski sees a religious “free for all.” Robert Pape of the University of Chicago, an expert on these rioters and related phenomena, says such radicals “have a thin knowledge and understanding of their religion.”

Boorstein and four colleagues dug into court documents and photo evidence for hundreds of people charged with Jan. 6 crimes to examine those who expressed religious motives. She found that “their faith is individualistic, largely free of structures, rules, or the approval of clergy.” Here are three case studies.

* A onetime Baptist and New Mexico county commissioner who founded Cowboys For Trump was an occasional preacher at a non-denominational “cowboy church” that eventually asked him to leave. He says his religion “is much more personal than a church group.”

* A District of Columbia private music teacher is a QAnon believer who streams his own solo Sunday service and says he is a “Christian of no particular denomination” who rejects the “fake Christians” in other groups.

* A Texas realtor and preacher’s kid who studied at a Charismatic school is distant from all organized religion and offers her Bible teachings to 65,000 YouTube subscribers. She was filmed Jan. 6 proclaiming “U-S-A.! Here we are in the name of Jesus!”.

I note the wry journalistic adage that two examples are mere anecdotes while three are a trend.

Nonetheless, Boorstein is on to something for other reporters to pursue. Her scenario gains heft from an important article reporters should ponder carefully, written by four scholars for the online Sociological Forum. Their theoretical framework cites 89 books and articles. The analysis draws from a single poll with a rather small sample of 1,501, so caution is needed pending further research along these lines.

The sociologists surveyed 2016 presidential voters regarding overlap among three factors, involvement in local churches, votes for candidate Donald Trump and support for “Christian nationalism” defined by six opinions (the U.S. should be declared a “Christian nation,” government should “advocate Christian values,” America’s success “is part of God’s plan,” and three items opposed to legal separation of church and state).

The findings are said to “highlight the appeal of religio-political beliefs for the religiously disconnected.” Thus, religion’s impact on politics may have less to do with what happens in churches than with how both religious and non-religious individuals “use religious ideas to draw and impose boundaries around national identity.”

Their conclusion: “Christian nationalism is only significantly associated with Trump support among unchurched voters,” with far weaker linkage among those who regularly attend church. Such detached populists identify as Christians and construct religious ideas around secular dynamics but are alienated from churches, which could provide them “support, affirmation and belonging.”

“At a time when fewer Americans attend religious services, religious narratives about Christian nationhood may have their strongest political effects when, and perhaps because, they are detached from religious institutions.”

Richard Ostling is a former religion reporter for the Associated Press and former correspondent for TIME Magazine. This piece first appeared at Get Religion.

Previous Understanding prayer: The tranquility of silence
Next In 2010, the US apologized to Native Americans. A new spiritual movement aims to recognize it

Did January Attack On Capitol Highlight ‘D.I.Y. Christianity’ As Decade’s Next Big Thing? – THE WROS