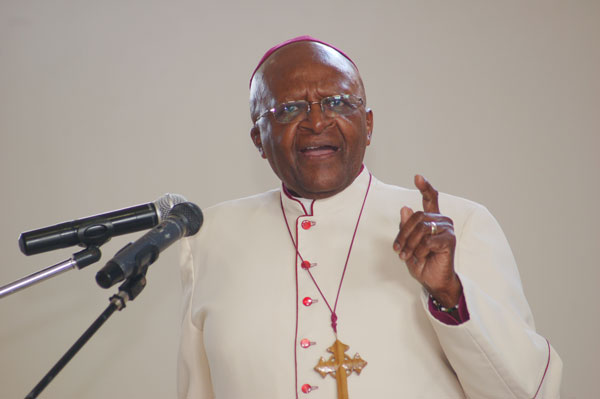 Desmond Tutu: I’d rather go to hell than serve a homophobic God, go to homophobic heaven

While speaking at the kickoff of the United Nation's “Free and Equal” campaign to promote gay rights worldwide, retired Archbishop Desmond Tutu, 81, raised more than a few eyebrows when he said he would rather go to hell than a “homophobic heaven” or serve a “homophobic God,” the UK Daily Mail reported last Saturday.

“I would refuse to go to a homophobic heaven. No, I would say sorry, I mean I would much rather go to the other place,” he said.  “I would not worship a God who is homophobic and that is how deeply I feel about this.”

Tutu is well known as a passionate campaigner for the gay agenda, comparing it to the fight against apartheid.

“I am as passionate about this campaign as I ever was about apartheid, for me, it is at the same level,” he added.

While his message was welcomed by those in attendance, not everyone was impressed.

“Archbishop Tutu is respected in the Anglican Church and around the world but this time he has misfired and all Anglican bishops from Africa, Asia and South America condemn his statement in no uncertain terms,” said Archbishop Yinkah Sarfo, the Anglican Archbishop of the Ashanti Region in Ghana.

Sarfo also accused Tutu of accepting money from other governments and gay rights groups, and said his statements were not sanctioned by the church.

“We suspect that retired Archbishop Tutu may have collected some moneys from some of the western governments or from gay rights activists to do their bidding but the Anglican Church condemns gay practice,” he said.

Sarfo was not alone in his condemnation of Tutu.

Julio Severo, a blogger WND said was “hounded into hiding” and ultimately forced out of his native Brazil for his open stand against the gay agenda, said Tutu would “feel comfortable in hell and in the presence of Satan” who he says “loves homosexuality” while hating homosexuals.

Life Site News said that Tutu was made a founding member of “The Elders” in 2007.  Thaddeus Baklinski described “The Elders” as a “group of self-proclaimed 'wise men' that includes Jimmy Carter, Nelson Mandela, and Kofi Annan, who, their website contends, meet privately to solve the world's problems.”

“Given that almost all of the members of the group are well-known, powerful figures in pro-abortion, pro-population control, pro-everything else circles, I can imagine what sort of ‘wisdom’ they plan on offering the world. Personally, I think the world would be a much better place without that sort of wisdom,” said Jim Hughes, president of Campaign Life Coalition, Canada and vice-president of International Right to Life.

I’m with Desmond on this one.

I find such a statement a disturbing and profound trivialization of hell and it cheapens his attempt to dignify the homosexual by his such a self-exalting statement.

The idea of hell is the idea that if you don’t believe the right beliefs, you will pay an infinite price. This idea creates an incentive in the minds of believers to refuse to question their own beliefs and to conform to the norms of society regardless of whether or not they are helpful or harmful to people. Tutu is struggling to break out of this oppressive system of thought.

Recently two Muslim boys burned two Jewish girls with acid (in the face), because of these sorts of beliefs.

The idea of hell is corrosive to human freedom and dignity. I can think of no more evil concept.

“These sorts of beliefs” is an illogical catch all phrase that clouds the truth, which is standard operating procedure in many debates, especially about belief in Jesus Christ. In fact the whole statement doesn’t make sense. The Bible says that only if you reject and trample on the Son of God and His sacrifice will you go to hell. The only sure thing I know about Islam is that you must work your way to a capricious god who has no mercy. That is played out with these despicable acid throwers. I don’t see followers of Christ throwing any acid.

Conversely, I don’t see much good coming out of the philosophy that we are just random mutations from slime with no purpose and no future beyond a few years in this sin sick world. Now THAT is hopeless.

I could think of a more evil concept, one that believes that no justice would be meted out to unrepentant acid throwers, murderers (oh wait, Jesus said that to hate someone is as bad as murder), rapists, and others worthy of punishment.

The true teaching about hell would be a deterrent to these type of actions which contributes to freedom for those who want to live a good life free from the worry of being raped or murdered. How does freedom from punishment for evil acts make society better?

Well David, there is a lot of ground here that I don’t think we will build a bridge across. Your assumptions about the nature of reality appear to be too different than mine. I’m not really interested in persuading you to my views. I just want to express them so that they get some “air time” as it were.

That said there are two things in your last post I’ll respond to:

David Said: “’These sorts of beliefs’ is an illogical catch all phrase that clouds the truth…”

You are right: I was sloppy and un-specific in my post about the two girls getting burned by acid.

Here is what I meant to say: Imagine the level of both cowardice and certainty that it takes to do that to another human being. Cowardice because they attacked without warning. Certainty because it takes a high level of certainty in one’s beliefs in order to rationalize and justify such a horrible act.

My beef is not against Christianity, or Islam or any other religion. Be beef is against the idea that ANY HUMAN BEING has truth with a capital “T.”

No matter what your ideology is, YOUR IDEOLOGY IS WRONG. Even if you got lucky and you ended up believing the “one true religion,” your ideology would STILL be wrong because you are a human being and your understanding is ALLWAYS limited and flawed. So even if you are believing the right ideas, you are STILL distorting those ideas based on your own limited understanding of the world.

Paradoxically it is only uncertainty that we can have any real confidence in. I believe that it is my responsibility to doubt my own beliefs, as an ethical person in the world. This is often time-consuming work, but the payoff is that I’m far less likely to act in a way that causes harm to others.

The desire for certainty is almost always tied up is some sort of idea that “my beliefs make me moral, and therefore my church/organization/tribe/nation has the right to impose its will on others through violence.” This is rarely explicitly stated, but it has played out again and again through history (Christian history included). In other words, certainty is a way of justifying political power.

Not divine power, POLITICAL power. The attackers in the acid throwing incident were enforcing the idea that Islam should have political supremacy in their society. They were saying through their actions that Muslims could walk the streets safely, but Jews could not. This was not a message to the girls, it was a message to the community. In the exact same way, the inquisition was used to terrorize the public and keep a system of political power in place for hundreds of years. Certainty is the state of mind adopted by those who wish to oppress the weak.

“How does freedom from punishment for evil acts make society better?”

It doesn’t. We NEED systems in place to punish harmful and dishonest behavior. But I believe we provide this for each-other. The Police force, private property, trial by jury, and dozens of other institutions (even simply politeness), are tools that we humans use to build a functional social order. Your idea of God is one of those social institutions. The idea of God is used to create a psychological deterrent for stepping out of line. So is the idea of hell.

But these are ideas. Whether or not they are true ideas is not something either of us can possibly know. But that’s the thing with ideas: They don’t have to be true in order to be effective.

I don’t think the idea of God or the idea of hell are true, but (as my ethics require me) I am uncertain about that.