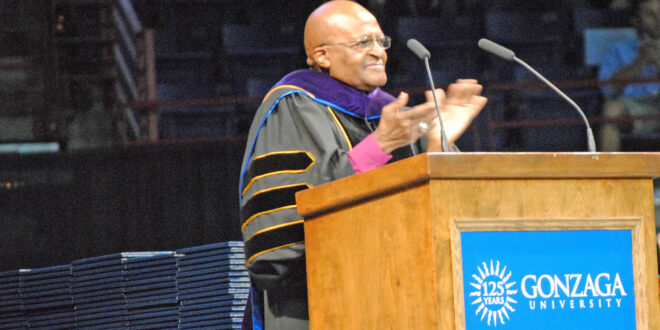 During a tour of South Africa, Zimbabwe, Botswana, and Namibia in August-September, 2009, I visited St. George’s Cathedral in Cape Town, South Africa. For 10 years this church was led by Anglican Archbishop Desmond Tutu, the first black bishop in South African history. One of the greatest leaders of Black South African liberation, he died on Dec. 26 at the age of 90.

When Tutu was appointed archbishop in 1986, he knew, replacing a white bishop, that it was illegal for him and his family to live in Bishop’s Place. He courageously defied the racist law and moved in anyway. The authorities did not dare arrest him.

As a boy growing up in Johannesburg, Tutu remembered the indignities of apartheid (separateness). Even the ambulances were segregated, and Tutu remembers Black people dying in their homes and on the streets because there was no transport for them.

Tutu also remembered the day when a white Anglican priest tipped his hat to Tutu’s mother. It was liberal ministers of all races, those most immune from arrest, who supported the elimination of this vicious regime of discrimination, oppression, and death.

In 1966 central Cape Town was declared a whites-only area and all non-white people—most walking to work and living in thriving multiracial neighborhoods for decades—were forced to move to segregated townships 20 miles outside the city. I visited those encampments, and I was shocked by the squalor and poverty that still existed.

During my stay in Cape Town, I went to the museum for District Six, which has been compared to the French Quarter of New Orleans. Muslims, Jews, Christians, and Hindus of all races enjoyed jazz together and celebrated each others’ holidays. Protests slowed the exodus, but in the end 60,000 people were forced out.

In 1996 Bishop Tutu was looking forward to retirement, but newly elected President Nelson Mandela appointed him to lead the Truth and Reconciliation Commission, one of the most remarkable experiments in healing emotional wounds ever attempted. Not only were the whites encouraged to come forward, but Blacks who had committed violent acts were also expected to appear.

The Commission wisely chose a middle way between blanket amnesty and Nuremberg-like trials of the perpetrators. Tutu called it “earned” amnesty, because those who came forward and told the truth were granted immunity from prosecution.

One of Tutu’s greatest regrets was with regard to Mandela’s former wife Winnie, who led violent attacks on white citizens. He begged her to come before the Commission: “You are a great person, and you don’t know how your greatness would be enhanced if you were to say: ‘Sorry, things went wrong. Forgive me.’” Winnie Mandela refused to confess and the Commission later found her “politically and morally accountable” for human rights violations.

As a student of Christian theology, I can say with confidence that the Truth and Reconciliation Commission—led by Black and white religious leaders, attorneys, and civil rights leaders—embodied the ethics of Jesus more than any other Christian institution in history. It is a shame that something similar has not, so far, been done for 400 years of Black oppression in the U.S.

In retirement Tutu joined others in promoting social justice for those with HIV/AIDS and the people in the LGBTQI community. On the eve of a climate conference in 2014, Tutu declared that activists should encourage disinvestment in oil companies as vigorously as they boycotted foreign companies during the South African apartheid regime.

Tutu had a long friendship with the Dalai Lama, and they shared the same concern for world issues and sense of humor. At their last meeting, they were constantly teasing each other, and Tutu tries to get his dear friend to dance along with some African music.

Even with a frail body in his 80s, Tutu was moving as gracefully as the workers who greeted me, dancing and singing, at the safari camps I visited. The Dalai Lama said “monks don’t dance,” but with Tutu encouragement he started moving just a little bit. Enjoy the fun at https://bit.ly/3nc2KM9.

Previous Activists, faith leaders reflect on religious freedom
Next Finding the courage to speak, even in the face of alienation