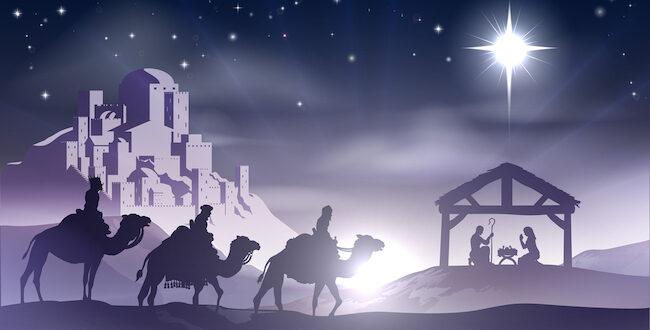 Christmas Christian nativity scene with baby Jesus in the manger in silhouette, three wise men or kings and star of Bethlehem with the city of Bethlehem in the distance/DepositPhoto

Are the Christmas stories in Matthew and Luke still meaningful if the dreams, apparitions and angel visits, the astronomical miracles, and the virgin conception never happened? The answer is “yes.”

But to find the existential and timeless meaning, the stories must be demythologized. Demythologize does not mean to regard the stories as untrue or false in any real sense. But it does mean to regard the form of the stories, which appears to be literally historical and/or scientific, as concealing a deeper truth. The purpose of Scripture is not to serve as literal historical reporting or scientific assertions. The intended purpose is to reveal truths to us regarding our existence in relation to other humans and to God (or the Divine or the Sacred).

In the Bible, that truth is that Jesus discloses/reveals what God is like, and that a life centered in the Divine is aligned with the ultimate qualities of the Sacred: Compassion and Love.

The Christmas stories, found only in Matthew and Luke, were written about 80-90 C.E. and relied on Mark (written about 70C.E.) and another source, Q, probably a collection of Jesus’ sayings. The Gospels are not eye-witness accounts of any of the events they relate. They describe the early Christian communities’ beliefs about Jesus (well after the fact of his life and death) and his significance for their lives.

Matthew and Luke have similarities and differences. Both have various versions of genealogies, annunciations, a miraculous conception, a birth in Bethlehem, birth announcements to strangers and the nefarious actions of Herod.

The narrative differences do not diminish the existential truth claims, nor are they obstacles to demythologizing these stories. If all mythological language in the Bible is intended to reveal the truth of our existence in relation to God and each other, I suggest, in brief, these truths are revealed:

We continue these Christmas stories when:  we “bring in the green” of a Christmas tree, a symbol of life in winter; we celebrate Christmas near the darkest day of the year and think of Jesus as the new light coming into the world; we remember the good news being given to the lowly shepherds, who were the keepers of vulnerable beings, as we might be keepers of our neighbors; we light candles to illuminate the darkness in the human condition and symbolize our hopes.

All of these existential claims are true, even if none of the seeming literal historical and scientific claims is true. These stories convey the foundational claim that Jesus reveals God as compassion and love and they serve as a transformational call for how we should treat each other here on Earth.

(A fuller treatment of demythologizing is beyond the scope here, but if you are interested, three writers who treat this topic are Rudolf Bultmann, a German Lutheran theologian writing in the 20th Century, from whom we get the term demythologizing; Marcus Borg, an American Protestant theologian, and Karen Armstrong, a British writer in the field of comparative religion.)

Previous Ask A Hindu: What Is Your Favorite Celebration?
Next Pandemic’s effects on religious life, liberty named No. 1 religion story of 2020