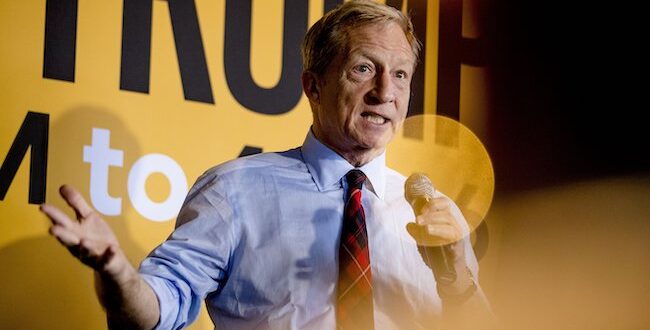 Billionaire businessman-turned-climate-activist Tom Steyer has emerged as an unexpected player in the race for the Democratic presidential nomination, recently polling among the top contenders in South Carolina. Known for his environmental advocacy, Steyer, like other candidates, has made a point of referencing his faith often while on the campaign trail — and even referred to religious activists while on the debate stage.

Still, less is known about Steyer’s personal approach to matters divine. He spoke with Religion News Service to discuss his faith, how it intersects with his policy agenda, and the overlap between religion and politics in the United States. This interview has been edited for length and clarity.

You had an interview with The New York Times recently in which they misunderstood your religious history, so I want to give you a chance to clear this up: Can you tell me a little bit about your faith journey?

I don’t know what made me do it, (but) somewhere in my early thirties I had sort of a midlife crisis, finding God as an adult … It could’ve had to do with having kids. At the time I just felt, like, “Wow.” I also had an Episcopal priest who is a good friend of mine and started going to her service with our family. So that was serendipitous.

I think it really had to do with, at some level, becoming an adult and taking responsibility for myself. And feeling that I needed a framework of meaning in my life.

You now draw the Jerusalem cross on your hand. Why that symbol?

You know, I’d never heard of it. I was just drawing a cross on my hand and then I kept filling it in to remind myself to be steadfast, be truthful to what you think are the deepest meanings. Don’t give up on that.

And you identify as a Christian?

I definitely do. Enough to identify … as an Episcopalian. I used to mock my mom for being a contradiction in terms: A devout Episcopalian.

If you listen to what the pope was saying, he was saying your responsibility is to take care of the most vulnerable amongst us, and to preserve God’s earth. This is a question about human suffering. It seems like, to me, the pope really nailed it.

It’s up to us together to change and do the right thing — and that’s what I’m calling on people to do. We have got to step up on this. I thought the pope was correct in saying we have a responsibility to act, and people at this point have got to take responsibility for themselves. I think people have got to change. It’s time.

You recently visited the church of the Rev. William Barber — a prominent progressive faith activist and head of the Poor People’s Campaign — in North Carolina. Why did you see that as an important place to visit, and what did you take away from that experience?

Well, Bishop Barber is an amazing spiritual leader. I think he’s one of the most articulate and insightful people about what’s going on in the United States. I’ve known him for several years, I’ve spent time with him, and I have a ton of respect for him. I was planning on going and speaking during his church service in July when I announced I was going to run for president. But he said, “Tom, you can’t speak during the church service because that would, you know, threaten our (nonprofit status).” Then we arranged for me to come down several months later and speak after the church service in a nonreligious fashion.

I’ve had a ton of respect for Bishop Barber for years — what he stands for and also his honest-to-God brilliance.

You’re wealthy. You’ve spoken about trying to use your means for good, but as you are a Christian, how do you respond to Matthew 19:24, when Jesus says, “And again, I tell you, it is easier for a camel to go through the eye of a needle than for someone who is rich to enter the kingdom of God”?

Maybe I won’t be rich when I die. Have you considered that possibility?

I did take the giving pledge (to dedicate a majority of my wealth to others). During this campaign there has been this sense (that) people don’t understand who I am. These are people who don’t know me, and they’re very sure that they do know me. There’s an assumption in there that where I’m gonna end up is where I am (now), and I would say I wouldn’t be so sure.

What do you think is the appropriate role of religion in politics?

I think your religion informs your values. I’m not someone who insists that someone agree with me about where to find God. I think everybody has a right to find God in their own way, and you can find it in a lot of different ways, and I’m perfectly fine with it. But do I think we have a responsibility to be good people on the earth? Yes, I do.

I don’t think you get to destroy the earth and put everybody at risk and walk away and be cool with it. There’s nothing cool about that. I always say to people, you’ve got to find the positive life force. You can do it your way. I get to do it my way, but you don’t have a choice about whether to do that. I mean, we’re all supposed to be here, making the earth better and helping each other out and leaving the earth a better place and people better off.

No! I mean, if you believe there’s (a) God, could you really believe that he, she, however you describe God, is really only going to save one tribe in the Middle East? Really? Is that possible? I mean, think about it. No.

So do you think that everyone goes to heaven? Are you somewhat universalist that way, or do you think it’s not something we have figured out yet?

We definitely haven’t figured it out. I certainly haven’t figured it out. But what I do believe is there is good and evil and there’s a positive life force that you can connect with that’s bigger than any of us. You can’t have good without having evil, and the idea that we’ve moved away from that to this relativist way of thinking, I think, doesn’t make any sense. Honestly — that’s just not the real world.

Do you think it’s a good thing Democrats are being more vocal and engaging with faith and religious and spiritual ideas this election cycle?

Yeah, I think it’s good. I’ll say this: there are a lot of people in this world who find their meaning in faith and specifically through religion. Part of why this has been so fun is connecting with those people. Going to Bishop Barber’s church was really fun. I’m not a Baptist, but those Baptist churches are seriously fun, and people are positive. You see a deep faith that has informed people through the harshest things you can imagine, and people are very sincere. It’s been one of the real incredible joys of this is connecting with people over that.

Has it been difficult for you as a person of faith enduring the trials of running for president?

Hell no. That’s been one of the best things about this.

I would never be doing this if I didn’t believe in God. It has made me feel much more confident in my faith. That’s been one of the absolute outcomes of it.

People think that politics makes people cynical, manipulative and dishonest. And I’d say for me the exact opposite is true. (It’s) made me feel much more intent on being corny and sincere and spiritual. I don’t think there’s any other way to get through it. …You have a choice, and I don’t see any way to do it except by being more honest and more sincere and more spiritual. I think otherwise you lose yourself.